And the Winner Is ... by Carla Damron

Miracles can happen. I testify to this because of what happened on Friday, September 22, when I attended a festive awards dinner in Albuquerque, NM surrounded by writing sisters from all over the country—and some beyond. I sipped wine and enjoyed mahi mahi and tried not to let my nervousness make me spill anything. At other tables sat two women who may have been as nervous as I was:  Barbara Claypole White, the author of Echoes of Family (about a woman with bipolar illness) and Amy Impellizzeri, author of Secrets of the Worry Dolls, about a daughter’s journey to understand her family and dysfunctional childhood.  These women are fine writers and delightful new friends. 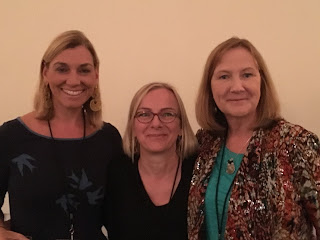 We were the three finalists for the Women’s Fiction Writers Association Star Award for Outstanding General Fiction. Writers comprised the first round of judging. Second round: librarians! I can’t imagine who would be better qualified to judge fiction than these two groups. How incredible it was for the three of us to be finalists.

I mentioned a miracle: my novel, The Stone Necklace, received the award. Picture me in shock, trying to stand up and walk to the stage. I felt tremendous relief that I didn’t have to say anything! I received hugs and had my picture taken and was interviewed by the media person. At some point, a tiara was placed on my head.

I called family. Watched my Facebook page explode. Wished my husband or Mom could have been there when I received it. At some point, I wore a tiara.

I may have had more wine. 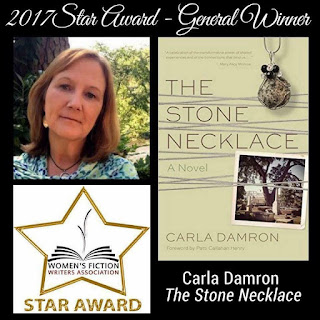 The award was part of a three-day writing retreat with amazing speakers on craft and business, as well as great networking opportunities. The WFWA folks are some of the kindest, funniest, rowdiest women (okay, maybe not THAT rowdy, but they do have a fondness for blueberry mint margaritas) I’ve met.

Did I mention I got an award?

Because the writing business has wonderful highs and devastating lows, this experience had its bleak moment: “here’s the great poster for your book! Too bad the store forgot to order it!” (New writers: THIS HAPPENS. Always have a stash of books in your trunk. Always. And no, I didn’t follow my own sage advice.)

In the long run, this was a very minor thing. I signed book plates, and the store agreed to ship books for free when they arrived. People also ordered digital copies. But what matters most of all: they gave me these beautiful stickers to put on my books: 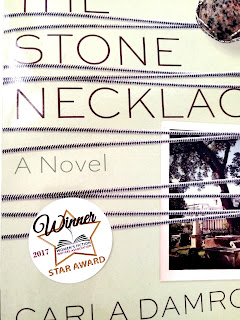 The stickers also wear nicely on sweaters, laptop bags, and, I was surprised to discover—my forehead.

I know the WFWA Star Award isn’t like winning the Pulitzer. Or the Mann-Booker Prize or the National Book Award. It’s a new prize from a four-year-old organization that some of you haven’t even heard of. Still, I couldn’t be prouder or more grateful. Maybe I’ll get a spike in sales. Maybe more people will review it. Maybe (because I am ALLOWED to be grandiose) it will land in the hands of someone who wants to make a film of it.

But if nothing else, my baby will be held by new people, and perhaps one of them needs its message of recovery from grief.

If this prize helps that happen, then I'm one ecstatic writer.

Have you been nominated for or won an award? Did it help your career?

Oh, Carla, this is fabulous! I cannot imagine a more deserving writer or book. Congratulations!

Such wonderful news, Carla. Congratulations. I've won contests, but never awards, but it's great to know friends who have won awards. Like the moon, I bask in reflected light.

Congratulations! It seemed to take forever between your finalist designation and winning.

This is so exciting! So happy for you, Carla, the award is well deserved.
Now where are those tiara pics?

Congratulations but I'm not surprised about this. It's one of my favorite books, and I'm
going to suggest it for both of my book clubs.

I read your book, and it was a well-deserved prize.

Congratulations, Carla. What a terrific, and well-earned, honor. It must give you a great feeling to have your hard work acknowledged by this prize and by all your readers.

Thanks, y'all! It's been an ADVENTURE!!

Actually, I wasn't nervous…because I knew THE STONE NECKLACE would win. I'm totally serious! I was honored to share the finalist field with you. xo