To Pun or not to Pun; That is the Question 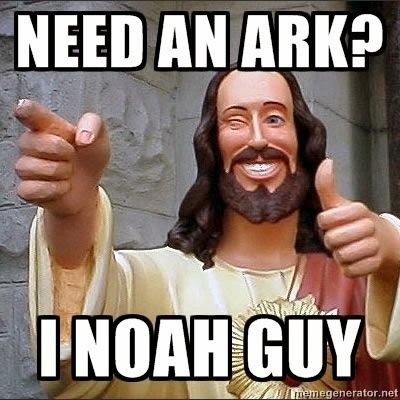 Alfred Hitchcock once said, “Puns are the highest form of literature.” I’m not sure about that, but I do know it takes a special talent and a quirky sense of humor to come up with them. The Oxford English Dictionary describes a pun as the humorous use of a word to suggest different meanings, or of words of the same sound and different meanings. Some people love puns, some people hate them, and others are indifferent; liking a few and not caring for or not getting the point of others. I happen to find them quite amusing. 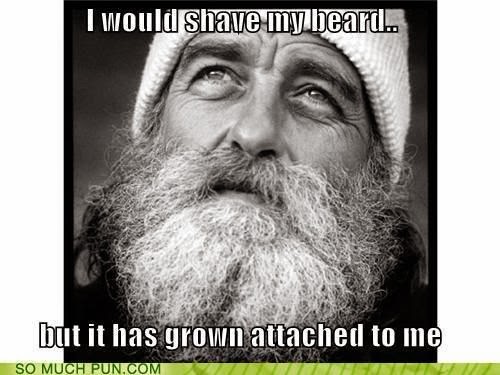 On May 9th in Austin, Texas, the 38th annual O. Henry Pun-Off World Championship will take place. People will be rewarded for spouting puns. So I thought I’d list some funny puns here to get you in the mood. The following list is taken from the “Pun of the Day” website. 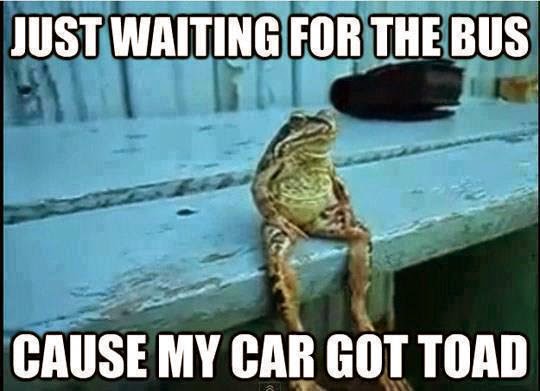 Some of the above were anonymous and others had hash tags, but no real names.

Last month the United Kingdom Pun Championship of 2015 was held in Leicester. A punster named Leo Kearse from Penpoint, who refers to himself as a Kearse on humanity took the title with gems like these:
“I was at the hospital last week. I asked the nurse if I could tend to my own stitches, she said suture self.”
“Marvin Gaye kept a sheep in my vineyard. He’d herd it through the grapevine.
“I used to have a job drilling holes for water. It was well, boring.” 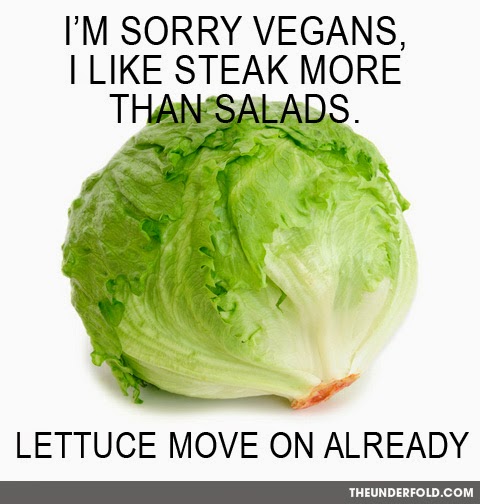 If the above isn’t enough, on Jan. 1, The Bored of Governors of the International Save The Pun Foundation issued its annual list of the 10 Best-Stressed Puns of the year.  The following are a few.
*          There was a burglar who would sneak into people’s bedrooms to give them a pedicure as          they slept. He was a clip toe maniac.
*          What is the difference between a nicely dressed man on a tricycle and a poorly dressed         man on a bicycle? A tire.
*          When I saw the depressed mathematician, I asked, “What sum adder with you?”
*          I bought an impressionist painting, but my cat scratched it. So I’m now selling it as a clawed Monet.

One of my sisters and also a brother-in-law of mine are quite good at creating puns. I’m not even though I enjoy hearing them and I always laugh when they tell one.  A few more perhaps? 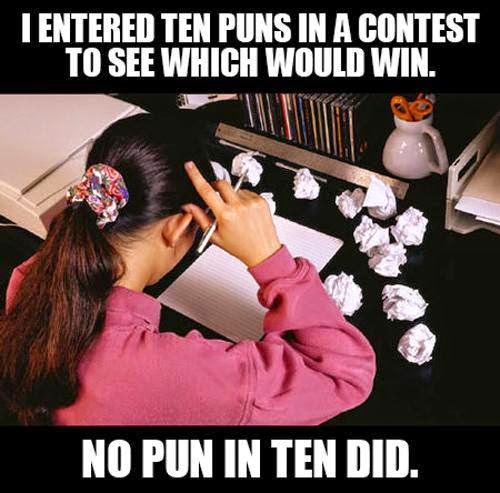 Jonathan Swift: “Punning is a talent which no man affects to despise, but he that is without it.”
Steven Colbert: “What does Karl Marx put on his pasta? Communist Manipesto.”
Shakespeare: “Tis no mean happiness to be seated in the mean.”
Bob Hope: “Over the years, I have been subjected to many indignities, all for the sake of Art. If I ever catch him, I’m going to kill the guy.”

Okay, enough with the punning. I’m all punned out even though none of these were my own.
Well, maybe just one more. Sorry can't help myself. 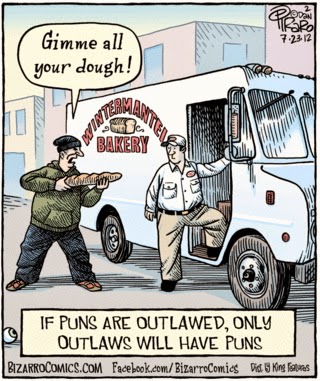 Email ThisBlogThis!Share to TwitterShare to FacebookShare to Pinterest
Labels: The art of punning

I enjoy puns, especially those who make me groan. Our youngest granddaughter is at the punster stage of life and I love it. The punnier, the better.

We call puns "groaners" - and you've got some great ones. "Clawed Monet" - I am going to laugh all day. Thank you, Gloria.
There's a story of a little snail that wants to race in the big leagues. He trained and trained, bought a special car called the S model, then surprised everyone by winning. You should have seen that little escargot!
Ba dum dum.


Jim, I think it's so cool that you have a young granddaughter that can create puns. She must be a quite intelligent young lady. Takes after her granndpa,
right?

Shari, that is so funny. How great to wake up to something that makes me laugh.

My older brother and his friends are all terrific punners. I stink at it. It truly is a gift!


Ramona, I agree it's a gift, but how nice to have family members and others you know who can amuse you with their puns.

Thanks for the smile, Gloria. My dad loved puns! As you can imagine there was a lot of groaning in my house.

Laura Byrnes said I LOVE PUNS! Your column made me laugh. Thank you Gloria, I always read your columns, I like how you wrap it up with a question. Always something to think about.

Did you hear a thief broke into the local police station and stole all the toilets?

Investigators have nothing to go on.

Kara, how nice to have a father who loved puns. I don't remember if my dad spouted them or not, but he may have and I forgot.

Laura, I'm glad you got a laugh for today. See you on Saturday at our writers group.

LD, that made me laugh out loud!!! Thanks for a another good laugh today.

I love puns! The Stephen Colbert one you put up there made me laugh out loud. "Communist Manipesto." I've got to tell that to someone.

Kimberly, if you Google puns, you'll find all sorts of funny ones. I'm glad you enjoyed the ones I posted.

I love puns, perhaps especially the bad ones, and people always send me birthday cards with the worst they can find.

One my favourites was a Christmas card featuring Olaf - you know, the other reindeer...who used to laugh at poor old Rudolph.