Not only is Verena Rose the chair of the Malice Domestic Conference Board of Directors, she is also coordinating, along with Rita Owen, the upcoming Malice Anthology, Murder Most Conventional. As you can imagine, she’s one busy lady. Verena took a few moments to tell us what’s new at the conference and to give us the scoop on the Malice anthology. 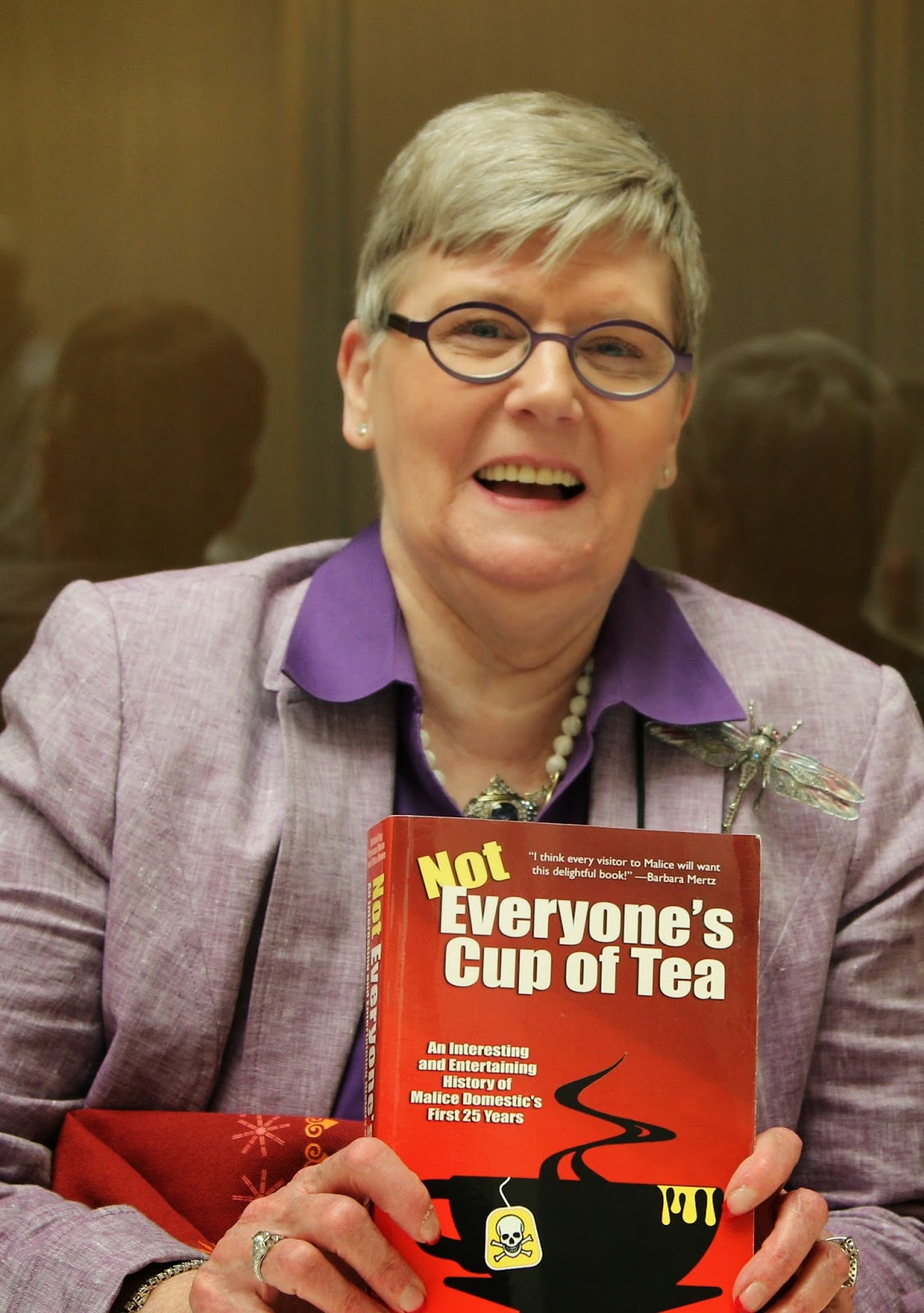 How did you first get involved with Malice Domestic?
I used to go to the Mystery Bookstore in Bethesda that was owned by Jean and Ron McMillen. I got to be friendly with Jean and she told me about an opening on the Board for Author Liaison. I had been attending since Malice VII so I thought it might be a good way to meet people and get involved so I told her I would be interested. I was elected to the Board for Malice XI as Author Liaison. I’ve also served as Program Chair, Treasurer (for several years), Agatha Chair, and now I’m in my ninth year as the Chair. As you can imagine, it’s labor of love for me.

You know what they say about Malice: Too much to do in too little time!
I don’t think Malice is any different than any other convention in this regard. There are always too many choices and too little time.

Any changes afoot for Malice this year? I noticed that instead of the Poison Lady, this year we have the Iron Coffin Boy.
Unfortunately, the Poison Lady had a conflict and cannot make it to Malice this year. We expect that she’ll be back with us for Malice 28. David Hunt and Deb Hull-Walski, Forensic Anthropologists, will talk about how researchers solved the mystery of a boy in an iron coffin discovered by utility workers.

This year a new Malice anthology, Murder Most Conventional, was announced.
The addition of the Anthology this year doesn’t really impact the convention process for the attendees. It really only impacts the Board and those individuals who are planning to submit a short story for consideration prior to the deadline which is May 1, 2015. It just happens that that is also the first official day of Malice 27.
I think the best information about the previous anthologies can be found in Not Everyone’s Cup of Tea (NECOT) in an article by Beth Foxwell entitled “Malice Anthologies: Malice in Small (and Lethal) Doses.” As for why we decided to do one for publication in 2016, well, Rita Owen and I had such a good time doing NECOT we decided to see if we could reboot the anthologies. We approached Wildside Press and they have agreed to again be our publisher. This anthology – Malice 11: Murder Most Conventional we hope will be the first of many to come. We already have ideas for another Murder Most….

You are chairing the convention, managing the anthology, and moderating panels. I hope you are planning a spa vacation to recuperate afterwards. How do you do it all?
The main thing is that the Malice Board is an incredible group of individuals that works enormously well together as a team. That being said, there are still days when I’ve got several balls in the air at the same time. I also work a full time job as a tax accountant. Thankfully, I now work from home so I have a couple extra hours a day that aren’t eaten up by a commute. So to answer your question, after April 15th I have plans to get a haircut, mani/pedi, and just relax for a couple of days before I do my final organization for Malice. And one of my best friends that I met at Malice IX will be coming to spend several days with me before we leave for the convention.

Who are your favorite mystery authors?
Those that come immediately to mind are Louise Penny, Lindsey Davis, Katherine Hall Page, Martin Edwards, Charlaine Harris, Dana Cameron, Elizabeth Peters, Peter Lovesey, Anthony Horowitz, James Lee Burke, Jan Burke, Robert Crais and a list too numerous to mention. I will say that I am particularly fond of historical mysteries. And while she’s not a mystery author, I am a huge fan of Jane Austen and consider myself a Janeite!

Thank you so much for stopping by WWK, Verena!

Readers, have you attended Malice? Are you planning to go this year?

I admire Verena's commitment to the Malice Domestic Conference. She doesn't have the time, and she still volunteers. I'm in the middle of revising a short to submit to the anthology. Thanks so much, Verena, for your hard word and diligence. You are giving opportunity to many writers.

After attending the last couple of years and having a great time meeting sundry Guppies, I won’t be returning this year. Other conferences seem a better match for my writing style, and its timing didn’t fit well with our other plans.

I know those who do go will have a whee of a good time.


Malice Domestic was the first mystery conference I ever attended back in 2007. I loved it so much that I've returned every year since then. I look forward to being there again this year.

I also am doing a final edit of a short story for the Malice anthology.

Thank you, Verena,for all the work you do to make Malice one of my very favorite conferences to attend.

Verena, so happy you could squeeze us in. Malice was my first mystery conference and I just love it.
Can't wait to see your short stories, E. B. and Gloria. I'm still toying with one, but I don't know if it will be polished in time for the Malice Anthology. Oh, well, maybe for the next one….

I went to my first Malice when we moved to the DC area in 2003. I've met so many wonderful people by attending. Thanks Verena, to you and the board, for all your hard work.

I've always had fun at Malice and met great people. I expect it will be just as grand this year.

Malice is a wonderful convention, and I can't wait for this year! Thanks so much, Verena, for all you do!

I should figure out what my first Malice was some time. I just know I've been going for years and wouldn't miss it for the world. Thank you, Verena, and everyone else who works so hard on this wonderful conference!

I'm not sure I have time to get a story together, but I hope the antho continues next year. I'll be ready for it then.

A great big thanks to Verena (and others like her) who work so hard on behalf of all of us.

Malice Domestic is a wonderful experience, for fans and authors and anybody who is interested in cozy mysteries.

Hope to see a lot of you there!

Verena! You've got me even more excited for this year's Malice Domestic :)

Malice Domestic was the first mystery convention I attended, and remains my favorite. Thanks for all that you and the board do to make it such a wonderful convention. Can't wait to see everyone soon.

This year will be my first Malice. I wanted to go for the last few years, but could never make it work. No excuses this year!

I've also been assigned to moderate a panel and I have no idea what I'm doing. I'll try not to screw it up!