An Interview with Susan Sundwall 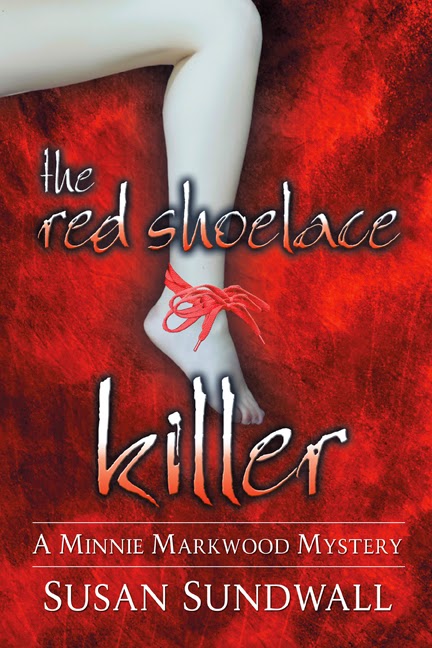 Susan Sundwall writes the Minnie Markwood series for Mainly Murder Press. I found her books on the SinC website’s main page, which features new releases of members’ cover art. I decided to explore some of the books that appealed to me. I clicked on the cover art, which took me to the author’s website or Amazon page, read the book jacket copy, and took a chance on some of the authors’ books.

I often take a chance on authors unknown to me on Kindle with varying degrees of success. By trying books by SinC members, I thought my rate of success might increase. I was right, and I’ll explore some of these finds in coming interviews.

I bought The Red Shoelace Killer, the first in Susan Sundwall’s series, and after getting to know her main character, Minnie Markwood, I bought The Super Bar Incident. Both books were enjoyable, part cozy and part traditional mysteries.

Minnie Markwood is a widowed fifty-five-year-old. She retires from her assistant librarian job, sells her house, and takes a job with Chapel Marketing. What work does Minnie do?

Minnie works for a marketing company, as I once did, where mystery shops are the main focus. These assignments take her into supermarkets, fast food establishments, movie theaters, and the occasional leather goods store. Large corporations hire Chapel workers to go in undercover and inspect for cleanliness, quality of product, employee compliance with company policies, and product placement among other things. Movie checks, open and blind, establish head counts used for statistical purposes. Minnie makes sure those blockbuster numbers are accurate!

Minnie meets Rashawna Jones, a nineteen-year-old former swimsuit model, who also works for Chapel Marketing. Rashawna confuses words like “diuretic” with “dyslexic,” but then makes astute judgments about people. Tell our readers about this young woman.

I wanted Rashawna to be a perfect comic foil for Minnie’s rather droll sense of humor. I have a fond remembrance of Eva Gabor in the old television sitcom, Green Acres, acting in similar fashion to Eddie Albert’s character. Rashawna is clueless, charming, has a certain native intelligence and possesses a hot temper once injured. She keeps Minnie and us wondering.

Joel is college-age, but has dropped out of school. Rashawna and he become romantically involved. He comes from such a different background, which he at first hides from Minnie and Rashawna. Why did he hide his identity from them, and what do Rashawna and Joel have in common?
Joel is both defiant about and ashamed of his dropout status. He hasn’t had the best upbringing and refuses to fit into the mold his pediatric surgeon father has created for him. He tests the waters with Minnie and Rashawna because he wants their respect and friendship, but not at the expense of his liberty. He and Rashawna may come from different backgrounds, but have had similar struggles dealing with where they fit in in the world. Plus they’re both good looking and full of youthful energy. I mean, swimsuit model and handsome bad boy – doesn’t get better than that.

Unlike many mysteries with amateur sleuths, Dan Horowitz, a local cop, takes Minnie seriously. Why?

Minnie stood out in Dan’s criminology course and they struck up a friendship whereby he came to respect her opinions and moral sense. He trusts her judgment. In addition, we need to know that there’s an authoritative presence somewhere in the background to insure that justice is done in the end. Dan fits the bill. In book three, however, Minnie and Dan are at odds, showing that even the best of friendships can sometimes go awry. 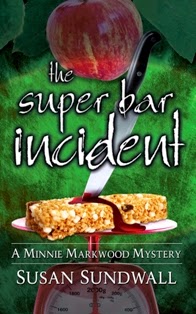 No. They’re something like Cow Tails, but with better caramel.

Due to their working relationships and ages (Minnie is almost too old to be Rashawna’s and Joel’s parent, but they are too old to be her grandchildren.), Minnie doesn’t relate to Rashawna and Joel as a parent would, and yet Minnie ends up cooking and driving for the group most of the time. Are the younger two surrogate children?

This unlikely trio is a truly needy mess. Minnie doesn’t have children and Rashawna and Joel feel somewhat adrift in the world. Rashawna and Joel are in a sense surrogate children for Minnie whose mothering instincts never had a chance for expression. This is a more thoroughly developed theme in book #3. In creating these characters I wanted the reader to realize that age needn’t be a barrier to mutually beneficial human relationships.

In The Red Shoelace Killer (a police cold case), the death of the victim’s relative prompts an obituary, which revives the case. Do many cold cases get solved due to later press coverage?

I have no statistics on that. I can only say that renewed interest in a cold case may spark awareness in the public’s eye and call forth new evidence for unsolved crimes.

I could only categorize your series as part cozy because you portray people in a very real way. Minnie has her faults as do Rashawna and Joel. Minnie seems to be a realist. The work Minnie and Rashawna do deals with consumer preferences—some good, some bad. How did you conceive of the series, and did you want the series to be cozy?

When I worked as a senior field manager for a small marketing company I dealt with bosses, field reps, and marketing projects that gave me much fodder for my stories. And talk about character studies! Fun stuff. It had to be in a book. I wanted the series to be cozy because of the readership I hoped to draw – women between the ages of forty and eighty who don’t want graphic sex, violence or foul language in the books they read. I’m sure there are men who want that, too, but perhaps not as many.

Minnie lives outside of Albany, NY, in what I assume is the suburb of Renssalaer. One assignment takes Minnie and Rashawna to Saratoga Springs. I got visions of malls and shopping centers, but also a sense that the outlying country wasn’t far away. What is the area like?

Upstate New York, where I live, is absolutely beautiful. You don’t have to go far out of any city or suburb, such as Renssalaer, to find the countryside. There you’ll encounter the lush farms, walking trails, ponds, creeks and lakes that make living in this part of the country so pleasant. And just a little further up the road we have the Adirondacks. Bliss.

We know that Rashawna didn’t grow up in the area, and we know Minnie has a sister in Poughkeepsie. Will readers find out more about their past lives?

They sure will. Rashawna really opens up about her past in book #3 and becomes much more adult in her outlook on life. In book four Minnie will visit her sister in Poughkeepsie where even more of her life will be revealed as she deals with some rascally art thieves.

What’s in store for the trio in the next book?

Minnie, Rashawna, and Joel go up against the Russian Mafia. Rashawna actually goes undercover with Minnie driving the getaway car when the whole caper goes south. They hightail it to the foot of the Adirondacks with a priceless Faberge egg in their possession. Minnie also comes face to face with the fact that a man, Conrad Edison, whom she met in book two, is very interested in a relationship. So fun to write.

Susan, are you a beach or a mountain gal?

Oh, boy. Tough question. I think I’ve transitioned from the days when I lived in Southern California and could wear a bikini. I much prefer the mountains now!

Thank you so much for having me, Elaine. Your blog is delightful.
Posted by E. B. Davis at 12:00 AM

A new series to try! Thanks for sharing your characters and stories with us. I've worked in libraries, so I'm looking forward to reading about someone with that background.

Unlike a lot of mysteries with an amateur sleuth--so far--Minnie has a good relationship with the police. Not at all like your books, Kathleen, but they are cozy reads!

Thank you ladies for your kind words. I love hearing from new readers and am in your debt, Elaine, for allowing me to visit your engaging blog. Keep up the good work!

Your series sounds wonderful, Susan. I like the way you've brought together three very different characters who form their own family.

Shari, Thank you so much. Unusual family units are so interesting, don't you think? I'm glad you came by. =0)