Marilyn Levinson continues her new Golden-Age of Mystery series with Murder the Tey Way. Josephine Tey’s novels become the focus of main character Lexie Driscoll’s book club. We learn more about Lexie when her sister arrives on her doorstep in need of help. Both sisters face changes in their lives and choices they must make. But change also occurs to another set of sisters who live next door to Lexie. When a body is found in Lexie’s backyard moving may be her only remedy! 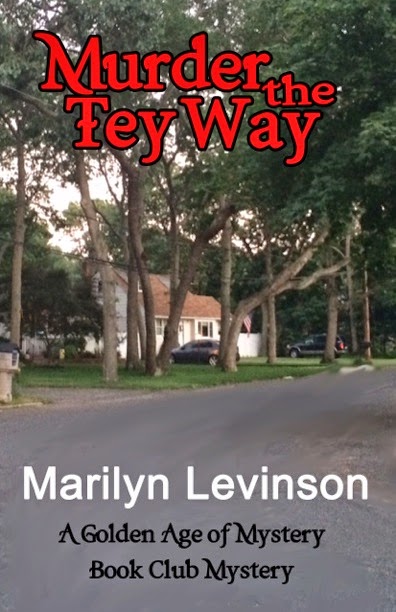 Give our readers a plot synopsis of Murder the Tey Way, if you would.

Lexie Driscoll is now living in Ryesdale, Long Island, in a home owned by her boyfriend, architect Allistair West, who is currently in London on a work-related project. At a Golden Age of Mystery book club meeting, Lexie learns that some of the members’ homes have been burgled. During a discussion of Josephine Tey’s books, Lexie’s sister Gayle arrives, terrified because she’s witnessed her boyfriend’s murder. She knows the murderer, a dirty cop, is sending someone after her. The following morning, a local handyman is found dead in Lexie’s backyard, and Lexie fears her sister may have murdered him, thinking he’s been sent to kill her. Still, Lexie’s certain her sister could never murder anyone, and so she sets out to find the murderer as she does her best to keep any mention of  her sister from homicide Detective, Brian Donovan. As Lexie and Brian grow closer, Lexie is determined to tell Allistair of the new state of affairs, but each time she’s daunted by the physical distance between them. A book club member is murdered. Lexie peels away layer after layer of secrecy and criminal behavior of the various members until her final encounter with the murderer.

This Golden-Age of Mystery book club contains diverse members; school teachers, a school guidance counselor, a lawyer, a former FBI agent, a banker, a clerk, and retired dairy farmers. How did you decide on the professions of each character, some of whom became suspects?

I didn’t consciously decide on the book club members’ professions until I began to write. I taught high school Spanish many years ago, and so I found it natural to include teachers and a guidance counselor in the club. And I know several lawyers. On one of my trips abroad, I’d met a married couple who’d been dairy farmers in the Midwest. Somehow they wormed their way into my book. And I thought a former FBI agent who was currently a soccer mom would be a fun addition.

Deceiving appearances is one theme that reoccurs in your book. What the truth is can be surprising, maddening, happy, or deceitful. You chose many outcomes, why?

My characters often have secrets. Secrets add a dimension because they refer back to a character’s history, background, or a hidden vice or personality flaw. In Murder the Tey Way, one secret involves a change of identity. Though we usually take people on face value, rarely is someone what he or she seems. And sometimes innocent people, like my character Evan Billings, find themselves entrapped in a bad situation through no fault of their own.

Joy was a great addition to this book and a wonderful secondary character. How did Lexie and Joy get to be good friends? 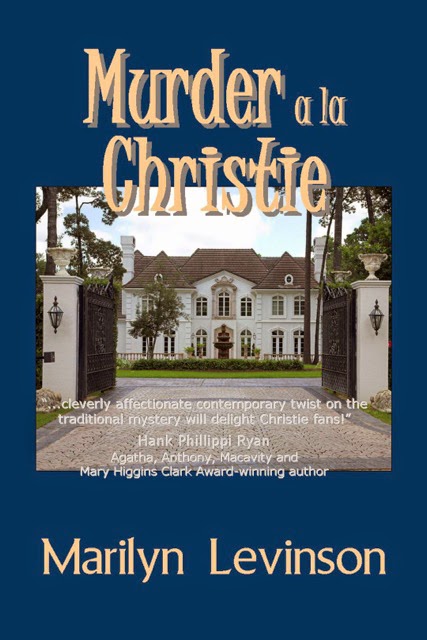 Joy and Lexie bonded immediately when Joy joined the Golden Age of Mystery book club. They both have a spirit of adventure. Lexie lives two houses away from Joy. Joy finds Lexie’s company a wonderful reprieve from the never-ending demands of motherhood.

No, it isn’t, but I know just where it would be on the map – a middle-class town in central Nassau County.

I was surprised by Lexie’s sister, Gayle. Except for both having had disastrous romantic relationships, Gayle is nothing like Lexie is she?

They are as different as any two sisters can be. Gayle is kind of a lost soul. She drifts from one situation to another and lacks Lexie’s ability to focus and achieve long-term goals. Gayle admits she’s always been jealous of Lexie. Lexie proves her love and support by doing everything she can to protect Gayle from her boyfriend’s murderer. Brian Donovan helps Gayle confront him. The experience brings the two sisters closer than they ever were.

Lexie is at a crossroad in her romantic relationship. What brought her to that point?

Lexie doesn’t trust her judgment, when it comes to men. Her two marriages have been disasters. She likes Allistair West and knows he’s a great catch, but that special spark is lacking. She shares this spark with Detective Brian Donovan, but wonders if he’s going to be reliable and the right man for her because of his demanding job.

I was surprised by the biographical information you gave on Josephine Tey. Did her stories contain physical action that harnessed her physical education teaching? Tell our readers about Tey, if you would.

Lexie’s book club members read the book Miss Pym Disposes, which takes place in a phys ed training school similar to the one where Josephine Tey taught. She taught a few years, then returned home to care for her ailing father. Her real name is Elizabeth Mackintosh, and she was born in Inverness. She wrote most of her mysteries using the name Josephine Tey. She also wrote plays under the name of Gordon Daviot. The most famous of them was Richard of Bordeaux. John Gielgud played the leading role. Though her output of mysteries is small compared to Agatha Christie’s, Tey’s books are so outstanding they ensure her a lofty position as a Golden Age of Mystery author.

What of Josephine Tey’s writing helped Lexie solve the mystery in Murder the Tey Way?

The study of analyzing faces is something Tey believed in. This is the premise of The Daughter of Time, and what inspires Tey’s detective Alan Grant to prove that Richard the Third did not kill his nephews. Lexie studies the face of Johnny Scarvino to determine if he’s as evil as Felicity claims he is. She also studies the photo of Corinne strangling Felicity’s ferret to analyze Corinne’s expression.

There is a cross study of sisters in your novel. The relationships are very different. Is it better to know too much or too little in sibling relationships?

There are two sets of sisters in this novel. One is Lexie and her younger sister Gayle. They are very different, but care for one another. The events that take place in Murder the Tey Way bring them closer. The other set of sisters is Felicity and Corinne Roberts. Corinne, an accomplished banker, controls Felicity’s life. Felicity is fragile and needs sisterly attention, but not to the extent that Corinne takes things. Felicity tries to break free of her sister’s control. In the end, the relationship proves to be symbiotic.

I plot my outline, but make several changes as I write.

What classic mystery writer will Lexie’s group read next?

I’m not sure. Perhaps Nero Wolfe. Or Ngaio Marsh.

Perhaps beach chair at this point in my life. <g>

Marilyn – I like the way you have worked the classic mysteries into you stories. How do you do your cover art?

I enjoyed the classic mystery bit too. Nero and Ngaio are two of my favorites. I'll be looking forward to seeing them in your next books.

You have a great concept. I love classic mystery writers.

Welcome to WWK, Marilyn. I love the classic mystery writers concept, too. Will you be doing Dorothy Sayers anytime soon?

Marilyn's books are always enjoyable reads. Since I hadn't read Tey, I also learned about the author. I love that! Can't wait for the next one.

Hi Marilyn! We met at Malice. I love the way you work in classic mysteries and I am looking forward to your next book.

Since I lived in Nassau County for years, and I love Josephine Tey, this is definitely something for my TBR list!

Jim,
I've been taking the photos for my book covers. Polly Iyer did my cover for Murder the Tey Way.

Ellis,
Thanks so much. I love having the option to hold discussions about my favorite Golden Age of Mystery authors.

Gloria,
What a wonderful suggestion! I've recently read a Lord Peter novel, the second in the series.

Elaine,
Thanks so much for having me.
I must tell you I'm working on a sequel to Giving Up the Ghost because you thought I should write a sequel, as did a few readers.

Thank you, Shari. I will write faster.

Hi KM,
I'm glad you're putting Murder the Tey Way on your TBR list.
I lived in Nassau Cty for most of my life. What town did you live in?

I read Josephine Tey after seeing a mystery on PBS and loved her work. There's so many good ones out there. Your twist is a great idea!

Thanks, Vicki. Josephine Tey is an original. Her work holds up.

I lived in good old Levittown for a while, then Rockville Centre. Some of my family still lives there. Our first jobs were all at Kennedy Airport. I worked in Hangar 16.

I love the Golden Age of Mystery authors concept, Marilyn. Murder the Tey Way is now on my TBR list.

Oh, I hope you do Ngaio Marsh next. I love, love her Roderick Alleyn.

Pat,
I love Ngaio Marsh's books, too. You and I often like the same authors, don't we?

You have a great concept with the book club that reads classic mysteries. I enjoy Tey because her mysteries are so different from one another. I look forward to reading your takeoff on Tey.