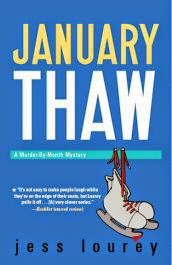 Jess Lourey’s main character, Mira James, is a mess. She has problems with men, alcohol, friends, men, jobs, a messed up past, men, interpersonal relationships, alcohol, candy obsessions, and, did I mention, men? When I found Jess’s Murder-By-The-Month series, I was addicted (Hint: This could be a theme). For those of you unfamiliar with her series, it starts with the month of May. So far, the books have progressed to January, but February is due in early 2015 so you won’t have to wait too much longer.

Would you share a series synopsis with our readers?

Thank you for having me! The Murder-by-Month mysteries, comic capers, feature Mira James, a small town woman who moved to the big city only to find herself transplanted to another small town, where she runs the local library and has had to solve a murder every month since May. I wouldn’t call her a mess, though. I’d call her more honest with her faults than the average sleuth.

How long had you written before getting the contract for the series with Midnight Ink, and how did the contract initiate?

I started writing MAY DAY in 2002 and had an agent by 2004 and a contract by 2005. I’d actually written my first novel in 1997, though. I thought it was brilliant. It wasn’t. It was thinly-disguised autobiography and less thinly-disguised crap. I gave up for a bit when no agent would touch it, but I couldn’t silence the need to write. I decided the answer was to get better rather than quit. I hope that always drives me.

Until coming to Battle Lake, Mira’s life was in bad shape. Although it still is, she seems to land on her feet. What brought her to Battle Lake and where is Battle Lake?

Hmm. You keep seeing Mira as a mess. I don’t know if that says more about you or me. Me, I guess. I see her as honest, quirky, and playing the hand she’s dealt. Maybe it’s because I spent a lot of time around brilliant lost people in my 20s—musicians, writers, potters. I patterned Mira after them. Her dad died in a car accident when she was in high school, and she fled to Minneapolis to attend college, wait tables, and try not to make the same mistakes he did. When she finds herself following his tracks to an uncomfortable level, she jumps at an offer to housesit for a friend in the tiny town of Battle Lake, Minnesota. She leaves behind a burgeoning drinking problem and a cheating boyfriend, but exactly like the rest of us, she discovers that you can’t move away from your problems.

Mira leans on vodka a bit too much. Is this genes or lack of nurture?
Her issues with drink stem from a mix of what was modeled for her when she was young, her age, and the people she’s hanging out with.

Speaking of addictions, what is a Nut Goodie and is it a real product?

Aiyiyi, I wish it weren’t. A Nut Goodie is a Minnesota original, a candy bar created by the same company who brought you the salted nut roll. It’s shaped roughly like a cow patty, and it has a maple center covered in peanuts covered in chocolate. They even make sea salt caramel ones now, and Nut Goodie ice cream, and if you’re really good, you can find deep fried Nut Goodies at the Minnesota State Fair.

Your secondary characters are wonderful. Would you give our readers a mini sketch of: Curtis Poling,

Sid and Nancy (not Sid Vicious and his girlfriend), Chief Wenonga, and Gary Wohnt (thanks for the onomatopoeia)?

Thank you! Curtis Poling has gorgeous blue eyes, a thick head of white hair, and he knows every Battle Lake story. He’s in his 80s and fishes off the roof of the nursing home to make people think he’s crazy, but Mira knows better. Sid and Nancy are partners who own the Fortune Café, a coffee house in Battle Lake. Chief Wenonga is a 23-foot fiberglass statue whom Mira develops a crush on when the other dating prospects don’t look so good (Google him and you’ll understand why), and Gary Wohnt is the local police chief. Over the course of the series, he morphs from a sorta greasy hick who is gunning for Mira to a quiet, handsome voice of reason who is a little too paternal for Mira’s taste. All it took for the change was for him to run away with a born-again woman.

Even though Mira had a bad relationship with her parents, she teams up with Mrs. Berns, an eighty-year-old. Is there more to their relationship than symbiosis?

Mira and her mom grow close over the course of the series, especially in DECEMBER DREAD, and that’s a source of comfort to Mira. Mrs. Berns, my favorite character in the series, is Mira’s best friend, the person who pushes her to do what’s right, including mending fences with her mom and dating Johnny Leeson, sexy local good guy. Mira keeps Mrs. Berns on the straight and narrow as much as she can, and together, the two help each other grow and have fun, a combo that’s not always easy to balance.

Mayor Kennie Rogers must not make much money being mayor. What money-making schemes has she thought up?

She has a new one every book. My two favorites are the coffee tables made of coffins which can be repurposed after your death, and the reused marital aid company called Come Again.

Time seems to threaten Mira. Will she ever be able to get her own home in Battle Lake?

Mira’s men seem extreme from the ridiculous (who has his good attributes) to the sublime (who never has enough time for Mira). Would you tell us about her love life?

Mira has dated a lot, but no one treated her like she deserved until Johnny Leeson came along. Naturally, she’s suspicious, and her insecurities are fodder for a lot of humor in their relationship. In FEBRUARY FEVER, the 10th in the series, Mira rides a train to Portland, Oregon, to visit Johnny. She hopes to also escape February’s murder, but alas, it follows her on the train, which ends up stranded in a snowstorm in the Rockies.

Since I’m hoping that your series runs past the year, how will you differentiate year one from year two?

You are so kind! I’m leaving that door open. How would you differentiate?

Are you a beach or mountain babe, Jess?

It’s funny because I was discussing this question with a friend before I saw the interview questions. I had decided I couldn’t answer it because I’m a Gemini and love both. If you put my nose to it, though, I’d say mountain just because it’s easier to keep a cabin clean than a hut.

Thank you for having me!

I enjoyed your talk in Chicago at MWA-U and look forward to reading your books. Intrigued by your secondary characters.

Welcome to WWK, Jess. Your series sounds like a fun one. I like characters that are less than perfect. I also write a month by month series, but without the name of the month in the titles. Since it's a gardening series, I usually have the name of a flower that's blooming in that month on the cover if not always in the name. I'm going to be challenged in the winter months. My main character has a way of finding bodies,too, and she's getting very tired of it.

I love Jess's main character, but her supporting cast is strong. Jess wrote a short story featuring Mrs. Burns. I hope she writes more! Since I love maple, next time I travel out that way, I'll look for Nut Goodies. They must be awesome if Mira likes them so much.

Jess, thank you for stopping by WWK! Your series sounds like a lot of fun and I look forward to checking it out.

Your series sounds fun, Jess! I laughed about the mayor's money-making schemes. I will need to find some Nut Goodies to eat while I read about Mira and her friends. Where can we find the short story about Mrs. Burns?

Margaret, thank you! That day in Chicago was fantastic, wasn't it? Gloria, thank you for your warm welcome! I have a gardening subplot in my series, and I also struggle with that in the winter months as my series is set in Minnesota. E.B., thank you for having me! I can't vouch for the greatness of Nut Goodies (to each her own), but they are worth trying. Shari, thank you! Kara, maybe I need to send you and E.B. some Nut Goodies so you an make up your own minds. :) Will you be at Bouchercon? And my short stories are available on Kindle.

Thanks for sharing. A murder a month should depopulate the small town in no time.

Heehee Warren, therein lies the problem with setting a series in a small town. :)

Thanks for telling us about your mysteries. Twelve in a small town--that's quite a feat! But any series has to ask the readers to suspend some aspects of rationality, or the protagonist would quickly run out of stories!

Hi Jess,
Unfortunately, I won't be able to make it to Bouchercon.
Thank you for letting me know where to find your short stories. I just downloaded Death by Potato Salad featuring Mrs. Berns and look forward to reading it!