My friends drive a hearse to church and they don’t operate a funeral business.


They do own a  facility called The Castle (which features an entertainment center and is available to rent for parties and receptions); however, this time of year is particularly busy for them.
From the beginning of October through the first of November, they invite guests to tour any or all of the three haunted attractions that make up The Dark Knight’s Terror Trail.

I spoke briefly with Elizabeth Stepp, extremely talented actress/dancer/teacher/and occasional zombie daughter of Scott and Lori Stepp, the proprietors of The Castle and The Dark Knight’s Terror Trail about how their annual ritual began.
Elizabeth said it was a venture between her grandfather Larry Oates, her uncle Mitch Oates, and father Scott Stepp to offer Columbia, SC, a young adult/adult (they advise if you wouldn’t take your child to an R rated movie, don’t bring your child to this event) different, interactive Halloween experience. 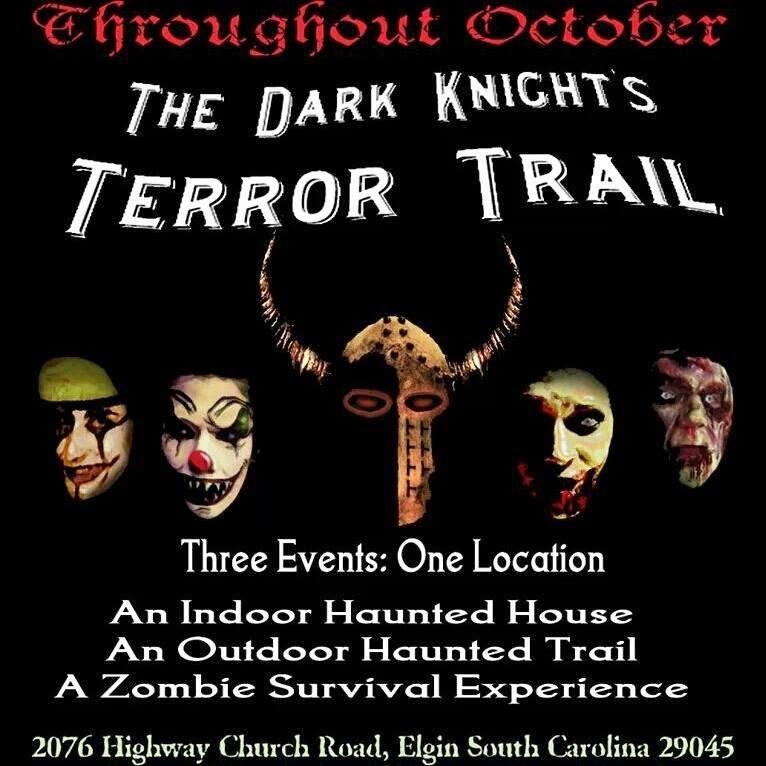 Now in its eighth non-consecutive year, The Dark Knight’s Terror Trail began in 1999 as an outdoor terror trail. At that time, they used Karo Syrup and food coloring to create blood, but it was sticky and attracted ants. Currently, they rely on fake blood or paint, which is spattered on the actors, props, and settings prior to the tour and not upon the customers. 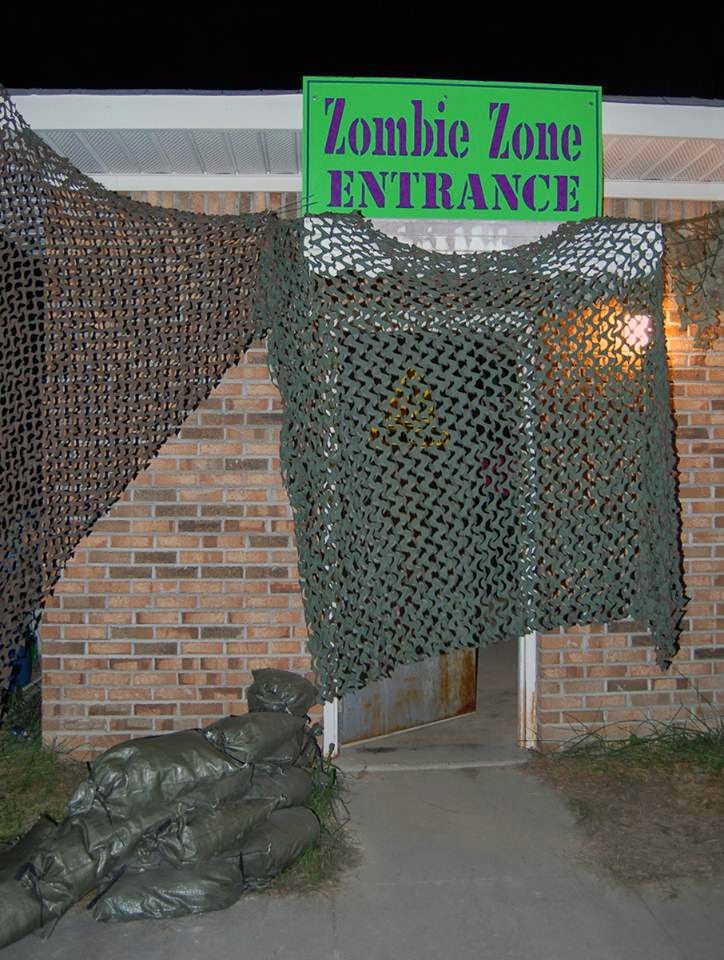 Due to family illness, the Terror Trail was not held from 2006 to 2011, but it reopened in 2012 in a vacant indoor mall store and added the Zombie Zone quest. In its present location at The Castle, it gives visitors the opportunity to experience an outdoor trail, a traditional indoor haunted house, and an expanded Zombie Zone, which is both indoor and outdoor. You may buy a ticket to one or all three, and you don’t have to go through them all on the same day.

Each attraction provides a guided tour with at least one and sometimes two guides. While the experience is aimed to scare its visitors, the tours have no nudity, no Satan worship, and only mild curse words, if any. Mitch Oates, who handles promotions and safety, makes sure each group is accompanied by a security person.

Organizing and planning the attractions is a family affair beginning with the prep work by Andrew Stepp, brother of Elizabeth and son of Lori and Scott, who studied Media Arts at the University of South Carolina and now works in the film industry in Los Angeles, California. Along with friend Jeff Driggers, a writer and director at Palmetto Pictures, a motion picture studio in Columbia, Andrew writes an outline of the background stories for the attractions and prepares short movies that lead the visitors into the tour and get them ready for what they may expect.

Scott Stepp, a gifted actor and singer who is well known to Columbia theatre audiences, often playing the villain, but sometimes the romantic lead (including Bill Sikes in Oliver, Judd Fry in Oklahoma, Beau in Mame, Oscar in The Odd Couple, Dr. Scott in The Rocky Horror Show, Frank Butler in Annie Get Your Gun, and Shrek in Shrek, the Musical) along with daughter Elizabeth is one of the tour guides and directors.

(Scott also generously gives his time every other year to play Judas in the St. Paul’s Players’ The Living Last Supper at St. Paul’s Lutheran Church, my home congregation. We tease that we had to ask a Baptist to play the role because we couldn’t find a Lutheran to take it.)

Lori Stepp, wife and mother, participates in the attractions and in addition serves as costumer. She’s well qualified since she fills that capacity expertly for the productions at Town Theatre in Columbia, one of the oldest community theatres in the country, which has been operating continuously since 1919. While visitors to the Terror Trail are waiting to see the attractions, Joan Oates, Lori’s  mother, tells them ghost stories.

The Stepps and Oates mobilize sixty plus volunteer actors, backstage assistants, and security persons to create the attractions. While the basics are scripted, the actors also have flexibility to improvise, which makes the performances different each night with each group. People looking to raise money for a local group can earn money by acting as Zombies in the Zombie Zone.

So, if you’re in Columbia, SC, this October, stop by The Castle for a heart-racing treat, with a few tricks on the side. Remember: the family that slays together, stays together. [Thanks to Lori Stepp for the wonderful photos!]
What’s on your schedule for Halloween?

When the kids were little we would go on outings like to the pumpkin patch. One year, I took my daughter and her friend on the Leesburg, VA haunted tour, featuring haunted houses in the town. Most were haunted by Civil War era ghosts. The town hired actors to set the stage at each house, in period character, telling the tour groups about the house and its hauntings. When we started out with the group, the adults started to sing the theme song to Gilligan's Island, much to the amazement of the kids. It was fun, but there was one house I left after a few minutes (taking the girls with me). I sensed a malicious spirit there. No other houses elicited that response. If people believe in an afterlife via a soul or spirit, I can't understand why some deny the existence or possibility of ghosts. Displaced spirits--and we know many alive who aren't particularly holy.

As for spirits, I recently may have experienced a prank from a mischievous one. I stayed at a bed and breakfast where a little girl spirit could be heard calling for her mother. We didn't hear the child, but after I left, I could not find my night shirt in my bag. I called the owner, who found it balled up behind the toilet in the bathroom. I know I did not leave it there!

The Stepps are wonderful people. I feel privileged to know them.

Now that's weird and spooky, Paula. I once stayed in a "haunted" castle in Edinburgh, Scotland. There were glass china cabinets placed on either side of the bed. When I heard a noise, I sat up, saw a reflection in the glass, and screamed. Of course, it was my reflection! (which reminds me of Art Taylor's short story in Chesapeake Crimes: Homicidal Holidays named "Premonition.")

And, Art Taylor's "Premonition" is an excellent Halloween story, along with Shari Randall's "Disco Donna" and, for President's Day, E.B. Davis' "Compromised Circumstances." All in HOMICIDAL HOLIDAYS from the Chesapeake Chapter of Sisters in Crime. A great all holiday gift!

Paula, as I'm mentioning in a blog this coming Thursday, I don't like horror movies and horror books, however something like what the Stepps do, would be fun. I think they're a great family. I always loved the whole Halloween experience.

I, too, believe in ghosts or spirits as I blogged about last year. Although, my experiences have been few, those of family members and friends have convinced me of their existence. I think some people have a more heightened awareness to their existence than others.

When my kids were of an age to go to this type of entertainment. one of the fraternities at a local college used their huge mansion as a haunted house, and did an excellent job of it. From the entry hall, where a living head in a fishbowl greeted visitors, up the impressive front stairway, through rooms with various themes, down the back stairway to the old basement kitchen, it was great. And raised a lot of money for whatever charity the fraternity chose that year.

They haven't had it lately--I suspect fire codes caught up with the attraction. There used to be a haunted barn in a nearby town, but the crowds became too rowdy and they had to shut that down.

Halloween can be a fun time, but unsupervised teens (and slightly older) can ruin it for everyone. Look at the recent Pumpkin Fest i New England that turned into a riot.

In our neighborhood we have an annual Halloween children's parade and party. This year I'm dressing up as the Cat in the Hat. After the party we go home and hand out candy to the kids who are trick-or-treating. One year a toddler got confused when I opened the door and ran inside thinking she was there for a visit. She sat on a chair in the living room and made herself at home. Of course, her parents ran in after her. It was wonderfully chaotic.

Halloween! How it's changed since I was a kid.

E.B., Gloria, K.M., and Kara, thanks for writing about your experiences. I love hearing about all the different forms of celebration for Halloween. And, Linda, it's changed a great deal from when I used to go trick or treating!

Halloween means giving out lots of candy! We seem to have more and more little ones in the neighborhood these days. I love seeing the clever costumes the kids devise. One year a bunch of girls wore green sweat shirts and strings of Christmas lights (with battery packs) and posed together to make a Christmas tree! Another girl dressed as Barbie - complete with a box she fashioned around herself from a refrigerator box. They all got extra treats.
Your friends' Terror Trail sounds fantastic. Creativity plus Halloween equals fun. Just as long as it's not too gory - that's not my speed.

That Minnie Mouse is super scary! I do love Halloween. It gives people (OK, me) license to access their inner creepiness. Thanks for this, Paula!