Recently I attended a full day of training sessions for the staff of my public library system. (Wait! Don’t go to sleep yet!) That there were sessions for meditation and self defense tells you everything you need to know about working in a modern public library.

First session of the day was Self-Defense. Expecting mats, sparring dummies, and punching bags, I was disappointed when I walked into a regular classroom and saw a police officer standing by a chalkboard. Then the police officer started his presentation. I am sure it was not his intention, but his class turned out to be a master class in choreographing a realistic fight scene. 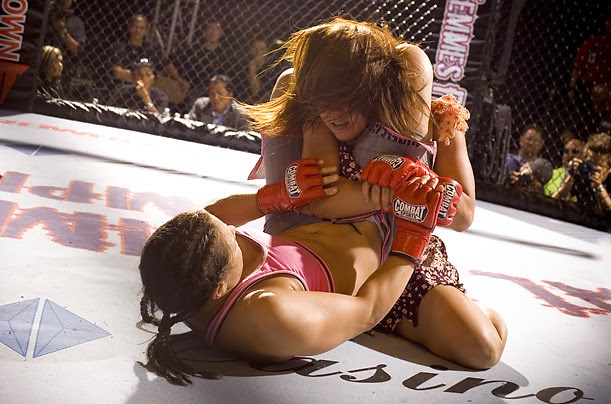 When she is threatened with assault in my current work in progress, my MC resorts to that old standby of eight year old girls everywhere – hair pulling. Turns out, that wasn’t as lame as I thought.

Our self defense class was taught by an ultra sharp and engaging police officer I’ll call Officer X. The first slide he shared with us listed the top banned moves (“fouls”) of the Ultimate Fighting Championships. UFC fighters are mixed martial artists, which means that anything goes in fights of incredible brutality and intensity. If the fighters in the UFC were allowed to use these moves, fights would be over too quickly because the banned moves cause significant pain, injury, and surprise. These moves, Officer X said, were the “go to” for self defense. Why? Because they work.

There are 31 fouls on the UFC list. Officer X shared the top 14 since after that the moves become increasingly less effective for self-defense. Timidity, applying substances to the skin or hair, or foul language are probably not going to help you or your MC defend yourselves.

I realized that this list was a good menu of moves for fight scenes. Not that I think I’ll need many. My MC is a lover, not a fighter, and like most women, she’s more likely to use her intuition and street smarts to avoid danger than her fists or feet to get out of it. However, in a mystery novel, danger cannot be avoided – what a dull book that would be! – so I’m glad to find her some effective moves, just in case.

As the UFC website states: “The following acts constitute fouls in a contest or exhibition of mixed martial arts and may result in penalties, at the discretion of the referee, if committed.”

Officer X told us he hoped we’d never need these moves. The best defense, he said, is not needing one. And if you haven’t read The Gift of Fear by Gavin deBecker, you should – it offers valuable insights to ways your intuition will keep you - and your characters - safe.

Does your story include a fight scene? How does your character get out of scrapes?

And when I was working in a large prison, I had several people tell me, "I didn't mean to kill him (her.) I grabbed him (her) by the neck and then he(she) was dead," so I think that must be a very effect move and one that's easy to have very effective results.

I agree that safety training for staff is a good source of information for writing about fights. I block out fights like a director of a play has actors move through what he or she wants them to do in a performance.

My main character, Seamus McCree, is a former soccer player, so kicking comes naturally to him. He’s attacked heads and knees with his feet. He also managed to accidentally head butt his son and break his nose.

Good information should I disable his feet!

KM, you mean it's a move you've used on the page, yes? Though I wouldn't be surprised. Sam, speaking from experience, mentioned that when head butting you have to be sure that you hit soft tissue (e.g., nose) so you don't knock yourself out.
This is not your typical writers' blog…. :)

Warren, that's exactly it! I feel like I'm blocking a scene. Theater experience is definitely useful.

Jim, I thought about Seamus and the head butt in CABIN FEVER. He is definitely a character who can take care of himself. Having an athletic character gives you a lot of choices in a fight scene, and boosts the believability factor.

Shari, my main character only fought once in the first book, and then it was in a fight for her life with a crazed woman. I had to wing the description of that fight because except for fights with my brother, when we were young, which involved more hair pulling on my part until he got his hair cut short. Other than that I've never been in any physical fight and hope I never have to do so, but I'll remember that list just in case.

Thank you for the list of self-defense moves, Shari. I've had my character kick and claw, but never spit or put a finger in an attacker's cut or orifice to defend herself. I wonder how well spitting works although I suppose the ick factor might stop someone.

Great post, Shari! I'd add to the list screaming, practice screaming. And like you I hope none of us ever have to do any of this!

My second manuscript had a fight scene, which one of my beta readers (luckily) edited. In my current WIP, I have fight scenes, but some of the fighters are of the "spirit" so human rules don't apply! :>)

Thank for the information, Shari!

Gloria, I thank God I've never been in a fight. I think I'd just flail. And getting into a fight with a crazy person, like your protagonist, would be especially frightening. Hope I never have to. *knocking on wood*

Kara - I'm with you. The ick factor of all of this is too much. No thank you!

Sherry - You're right. Screaming should be on this list. I think it doesn't apply for UFC but it sure does for self defense.

E.B. - a supernatural fight! That's something I want to read!

Loved this. Both practical and scary.

Very informative post. Thanks a lot. This is interesting for our writing and for our (hopefully never having to use) self-defense.