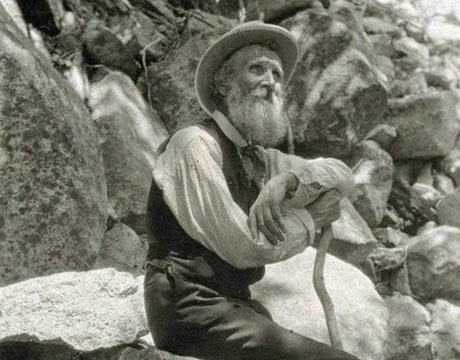 About seven or eight years ago I went to an event at the Happy Days Lodge in Cuyahoga Valley National Park to hear two historical interpreters, Lee Stetson as John Muir, and Doug Brennan  as Theodore Roosevelt. Of course, I’d heard of John Muir, but didn’t know that much about him except that he had something to do with Yosemite National Park. A few years later I watched the Ken Burns special on National Parks and learned more. 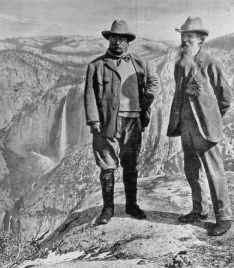 That night I became totally fascinated with the two of them, but especially John Muir. I’d already read River of Doubt by Candice Millard about Roosevelt’s horrible trip down the Amazon River, as well as an interesting biography of Roosevelt by H.W. Brands and knew of their meeting in Yosemite, and how that meeting helped save Yosemite as a national forest. My fascination with John Muir from Lee Stetson’s portrayal of him only increased when three years ago my daughter, Mary, and I stayed at Yosemite for several nights and again I saw Lee Stetson portraying John Muir. Mary was just as fascinated as I was and we each bought Lee Stetson’s book about Muir that evening, The Wild Muir; Twenty-two of John Muir’s Greatest Adventures, selected and introduced by Lee Stetson. In May of 1903, Roosevelt invited Muir to a four day camping trip in the Yosemite wilderness.

A few weeks ago when I was in California, my daughter, my youngest sister and her husband and I went to Yosemite to camp for three days and nights. My sister and brother-in-law had never been to Yosemite National Park before. This time instead of camping in the congested Yosemite Curry Village area, we went to Wanona Campgrounds, a campsite not as crowded. In fact, we all commented on how much John Muir would have been appalled at Curry Village and camping area now in Yosemite with its mobs of visitors and tourists taking pictures and selfies. On this trip, Mary and I visited several areas we hadn’t seen on the first brief visit several years ago. We also got some good hiking in while we were there. Of course, not being used to climbing on the flat land I live in, it took lots of brief stops to rest for me, but I still enjoyed it immensely.

One of the sites we visited was Mariposa Grove, a grove of magnificent sequoias that Galen Clark, years before John Muir came to Yosemite, was able to convince Abraham Lincoln to save when loggers started cutting them down. We spent several hours walking through this grove and taking pictures. Even though it wasn’t a holiday or a weekend, there were a lot of visitors also enjoying this grove. Although the coastal redwoods are the tallest trees, the sequoias are the largest in girth. Two of the world’s largest sequoias are in Mariposa Grove.

After lunch we stopped at the Wawona Hotel, the oldest hotel in Yosemite for lunch. The original was built in 1876, but it burned in 1878 and was rebuilt close to the original site. It was a lovely place to eat lunch.

Yes, we were totally awed by the magnificent Sierra Nevada Mountains in Yosemite as we traveled on the winding mountain roads and from Yosemite Valley looking up at those high peaks surrounding the valley as we visited the different businesses and the Visitors Center in Yosemite Village. Would you believe they have a post office there as well as a district court that meets there? They also have two luxury hotels, one with rooms that start somewhere in the $400 to $500 dollar range and even over a thousand dollars for one night.


But that third afternoon when we traveled up to Glacier Point and got a view of the mountains that went on and on for miles and miles, we truly understood why John Muir became completely hooked on Yosemite and were grateful for him. Yes, he traveled many places, but he held Yosemite forever in his heart. He fought long and hard to save it from sheepherders, loggers, and anyone trying to destroy it in anyway. I’ve seen many remarkable sights, like the Grand Canyon and other mountain ranges, too, but nothing can compare to Yosemite’s Sierra Nevada Mountains, in my opinion. No picture can depict the breathtaking panorama when standing in a place like Glacier Point with the valley below. People were no larger than small dots and those gorgeous mountains kept stretching on and on and on.

Several days after Mary and I left Yosemite, while my sister and her husband traveled on to camp in other national parks, we visited John Muir’s home in Martinez which is now open to visitors. They have a museum there as well as nine acres of the original ranch he managed for his father-in-law. Muir had an amazing wife who encouraged his writing and travels even though he was often gone for many months at a time. It was quite a luxurious home, not at all what one would imagine for Muir, who traveled with a few biscuits in his pockets for food and slept on the ground. What I was most fascinated by was his “scribble room” as he called where he did his writing. Papers were thrown all over the floor of what he called “scribbles,” as well as sketches he’d made. (All were copies, of course.) His desk was in front of a window that looked out over what were once acres and acres of fruit orchards. Only nine acres remain now, but visitors are invited to pick and eat any fruit of the remaining trees. However, this late in the season, there were none still left except some pomegranates which are too messy to eat. Besides my daughter has some in her backyard.

John Muir’s life story is fascinating. Born in Scotland, he came to America with his family as a young boy. His father was a harsh man and made John work hard on their farm in Wisconsin. The trees in the wilderness around him in Wisconsin called to him and he became an ardent lover of trees and nature and eventually later in his life he started the Sierra Club in addition to saving Yosemite. Muir was also a writer, who kept a daily journal and wrote articles he submitted and had published in a wide variety of places. He was an artist, an inventor, whose inventions were incredible. He had an innate curiosity about all things in nature studying botany, animal life and geology. Muir correctly identified that Yosemite Valley was created by glaciers long before other geologists acknowledged this.

Most people think John Muir was a loner because of the long periods he spent in the mountains, but that’s not true. He enjoyed visiting with people and telling tales of his adventures, and the many adventures he had. He loved his family – wife and two daughters and being with them, but he did have a need to travel and explore. It wasn’t only in Yosemite that he traveled but throughout the United States, Alaska, South America and Africa. And now I have several new books to read about him.

What people in history do you admire?

What places have you visited that took your breath away?

Email ThisBlogThis!Share to TwitterShare to FacebookShare to Pinterest
Labels: a man who made a difference, a writer, an explorer

Great informative blog. And I've added to my "must be visited in this lifetime" list!

I think my favorite trip for seeing wonderful natural things was Alaska. Everywhere you looked was a new wonderful view.

My all time favorite single view, though, was a sunrise over the Indian Ocean from the coast of Zanzibar.

KM, someday I'd like to visit Alaska, too. I've never been to Zanzibar or anywhere in that area of the work. You are quite a traveler.

What a wonderful trip, Gloria.
We drove cross country a few years back and saw so many spectacular sights but the ones that stayed with me were the stars over Zion. Zion is in a canyon, so when you look up at night it looks like a river of stars overhead.
Zanzibar! I hope you have photos, KM!
Alaska is on the bucket list, too. My bucket list is getting kind of long.

I've been fortunate enough to spend some time in Alaska and I've done a number of river raft trips through canyons so I know exactly what Shari is talking about.

I honestly can't pick a favorite site because each place has its own beauty or haunting or whatever. I just hope I live long enough to see a bunch more of these United States.

This summer we're taking one of the grandkids on a month-long road trip out west to allow her to see some of the sights. It'll be great fun to see some places again through her eyes.

My family visited Point Du Hoc in Normandy where during the invasion of Europe the rangers scaled a steep cliff under fire and captured a location from which most of the beach could be seen. There were craters from bombs that had been dropped. It took my breath away.

Great post Mom! Our trip still lingers on and I am still reading about this fascinating man who saved Yosemite, John Muir is a hero to all who love nature.

Shari, the stars are amazing wherever there's no light pollution. Unfortunately, those places are few and far between. However, there were no electric lights even on the restroom at the campgrounds we stayed in so we saw a beautiful display of stars, too.


Jim, what a great trip that will be for your granddaughter. I hope she enjoys it as much as you and Jan will.

Warren, although there are no actual remnants of the battle anymore, Gettysburg had that effect on me, too.

Mary, we'll have to do Yosemite again someday.

There are so many beautiful places to visit it's hard to choose just one. The Redwood National Forest in Northern California is amazing. The trees are huge!

Kara, I was there seven or eight years ago on a sibling camping vacation down the coast of Washington to Northern California. It was the first time any of us had seen those trees. Truly magnificent. Were you aware that there are whole ecosystems up near the top with some as big as almost an acre with shrubs like blueberry bushes, flowers and various animals that make their home up there.

I didn't know much about Muir, Gloria. Thanks for the education. Looks like Mary inherited her mom's good-looks! Wonderful vacation. (sorry I haven't been near the Internet in days)

Actually, E.B. Mary looks more like her father than me. She's much prettier than I ever was as well as being taller and thinner. :-)