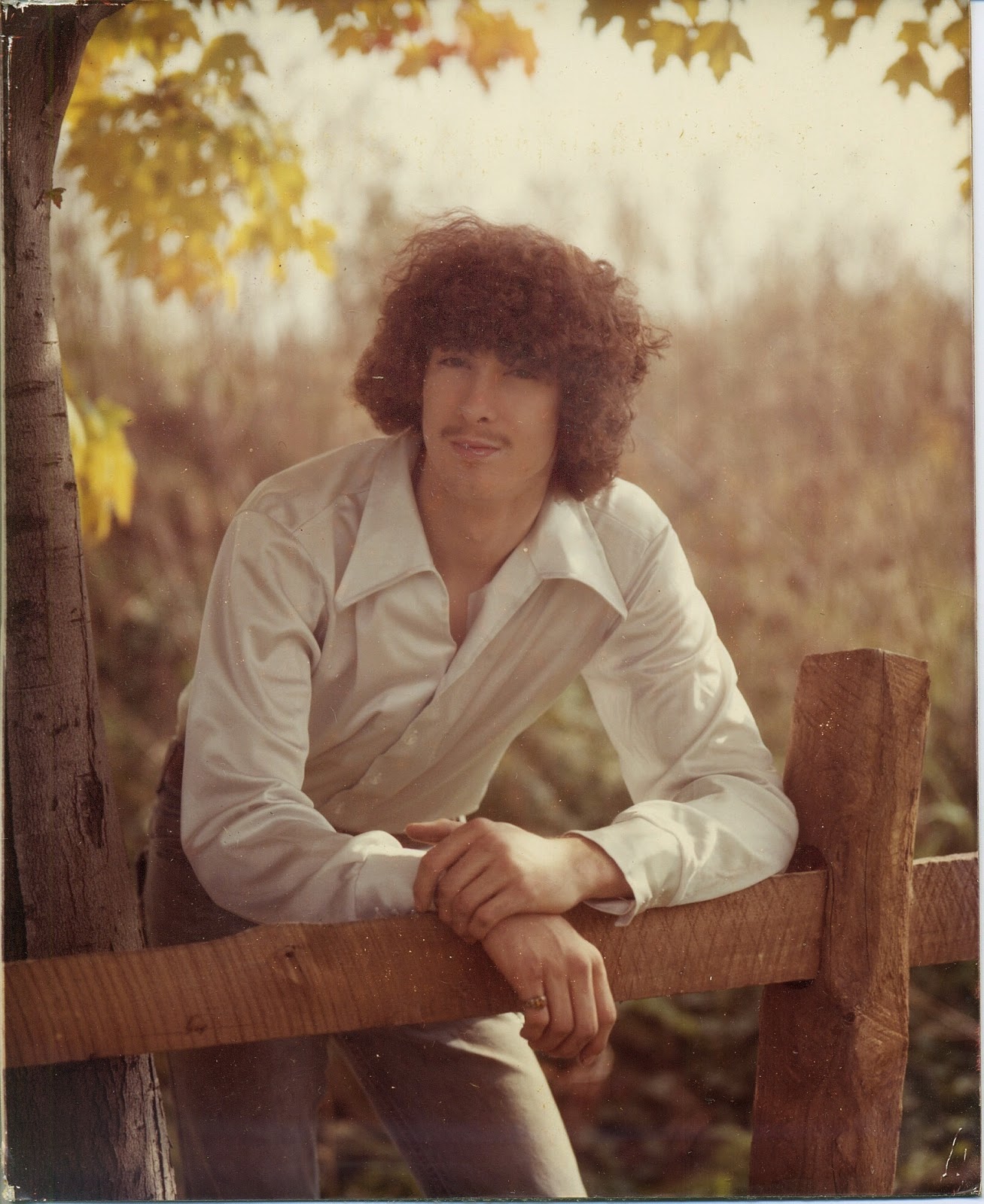 Bittersweet October
Against bittersweet October fields
shrouded purple and gold in memoriam for you,
you who will always remain eighteen,
the hitchhikers waited scorning funeral black
for jagged jeans and jaunty gypsy skirt.
Backpacks, guitars and exuberant youth
on their way to a concert of the Grateful Dead.
Are the dead ever grateful? Are you?
You who were born too late
and died so young,
would have enjoyed these relics
of the searching, seething sixties
as did I who was born too soon.
The hitchhikers and I talked of relevance
and the meaning of life,
but on the meaning of death
they were silent.
We parted ways
they to continue on in the sixties,
and I to return to the present
and duty,
and responsibility,
and my aching need of you.
(1984)
Tomorrow, October 3rd, it will be thirty-four years since I held my eighteen year old son John in my arms as he died from cancer. I was able to give him the last gift of dying at home. I wrote about this event two years ago, Oct. 5, 2012 and told the story of my son and what kind of boy he was. If you want to read his story, it’s in the archives.

As I wrote then, his death had me seeking for something that would make it all meaningful, if such a thing existed. I went to college, became a teacher, and taught third grade for twenty very rewarding years. Teaching third graders was mostly delightful, and yes, stressful at times, but it made me feel I was doing something positive, and it awakened the child in me so it was a lot of  fun, too.

But something else came out of the tragedy of losing my son, John, and that was writing. In college I had to write research papers, essays, and even wrote a short story that won an award, and found I enjoyed writing. In fact, I went on to get a masters in English, not to further my career as an elementary teacher, but because I missed the reading and writing research papers. But what I wrote for healing was poetry. I wrote an essay “Saying Goodbye” about that last day, and I wrote and am still writing poetry for my son. Every year I put a new poem in the newspaper on the day he left us.

The college papers and the poetry was a start of my writing career, but it didn’t end with poetry. Eventually I started writing mysteries; books and short stories. I’ve always tended to tackle things with enthusiasm. For years I painted and loved doing it. Then there was teaching – a great challenge both creatively and sometimes tedious with grading papers or meetings. Is there anything more boring than meetings? Playground duty? Not so bad except when it’s quite cold and solving the spats. Lunchroom duty? Awful! The noise level and trying to keep kids eating and not talking and fooling around was a pain. “Drink your milk! At least eat a few bites of the vegetables.”

Today I’m a mystery writer and gradually attaining a modicum of success at it. Will I ever be on any best seller list? No! But that doesn’t matter as much as having people read and enjoy my books, and even more it’s using my creativity to plot, create characters and write a satisfactory book or story. I can’t imagine not writing and I’m very content and happy with my life path. Would I have followed this path if John hadn’t died? Maybe I would have, but who knows. I live with what ifs. I’m planning to put together a book of essays and poetry I’ve written since John died. I know poetry doesn’t sell well unless you’re someone like Billy Collins, but the money doesn’t matter as much as hoping it will help people out there on their path through healing.

What events have changed your life?

I do not have such a loss as you, which surely makes it easier to try to focus on the now and the future than the past. Yet, there are times I will kick myself for what I’ve done or not done and wonder why of it more than the what if of it.

Jim, I think we all have regrets about some of the things we've done or not done. I can't imagine there's many who never have those to some extent unless it's a very narcissistic person.

my heart aches for your loss, but know how many lives you've touched through your teaching and writing. Regrets and memories of bad times are put aside by joyful anticipation of what is still to come.

Gloria, I'm sure your son would be very proud of your success. You are such an incredibly inspiring person. I look forward to reading your book of poetry and remembrances.

Gloria, This post brings tears to my eyes. Thank you for sharing it. I am so glad you're putting together a book of essays and poetry. I am sure it will help others. Please keep us posted. I want to read it, too.

Thank you, Margaret. I like to think I have touched lives through my teaching and writing. I'm always delighted to hear from former students and their parents on what a difference I made, but truthfully, I was having a lot of fun while teaching.

Paula, I know my son would have been and I like to think that he's aware of what I'm doing and I can feel him smiling.

Susan, I have to get my fourth book out before I can start that project. Right now I'm in the final editing and reformatting stage of that.

I'm writing this through damp eyes. How I feel your pain. I can't imagine going through what you have. It's every parent's nightmare, and the thought is inconceivable even if the reality looms over our lives. Keep writing. It's the most cathartic thing you can do. Hugs.

Cancer and two bone marrow transplants started my life again twice. They ended my career as a psychologist and gave me more incentive to write.

Polly, you're right. It's every parent's worst nightmare. Whenever I read or hear about it happening to someone else, I get damp eyes, too, knowing what they're going through. You're right about the writing, but teaching young children helped immensely, too. How can one not be helped by their enthusiasm and joy?

Warren, you've gone through a lot and I'm glad you turned to writing because you write awesome short stories.

In 2004, my younger son, Samuel, died of Cancer. He was only 11 months old. I can truly and painfully say, I understand.

Your beautiful tribute to your son brought tears to my eyes, Gloria. My thoughts are with you and everyone who has lost a child.

I'm so sorry for your loss. Luckily I've never had to face that, though I know friends that have.

A lovely tribute by a very special lady.

Helen, I'm sorry. It's still so fresh for you. There's no such thing as "getting over it" but the pain does soften with time.

Thank you, Kara. Writing poetry for him is the one thing I can still do for him. I like to think he's able to read it from wherever he is.

Thank you, Kate. It is probably one of the worse things that can happen to a parent, but I'm lucky with the family and friends I still have.

Gloria, this was simply beautiful. I am sure your son is smiling down on you. Hugs from Shari

You and your family were an influence on our family. We were privileged to know Johnny from the time he was born till his early teens.We then moved to Virginia. You were such a great example to all of us as you went through this time.You may be separated from him now for a little while but you will have an eternity together.Proud of what all you have accomplished.

A touching and memorable poem, Gloria.

I can't even imagine the pain you have gone through, but I recognize the strength you have shown.

I can't imagine, won't imagine, can't go there. How you survived it and went on to do all the things you've done, Gloria, is a testament to your strength.Yes--you had no choice--that's part of the dastardly nature of motherhood.

Ron, I truly believe that. I just wish there was a phone line to Heaven so we could talk about things sometimes. :-)

KM, the poetry I write is my way of communicating with him in some small way - of letting him know how much he is missed.

E.B.,you're so right. It's why I still worry about my other children and grandchildren, too, especially since I lost my first grandchild when she was six years old.