An author with an eye on the U.S.-Mexico border

Rebecca Jean Downey joins us today on Salad Bowl Saturday with a different perspective of the US-Mexico border than most of us have experienced. 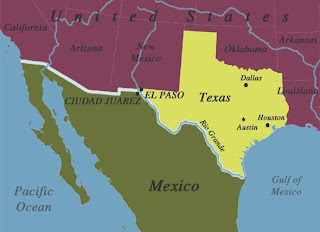 A few years ago my seventh floor office window at The University of Texas at El Paso looked out on Ciudad Juárez, Mexico, which was just about 400 yards away.  The violence generated by warring drug cartels was at an all-time high and thousands of people were being murdered every month, kidnapped for ransom, or their businesses were being extorted.  If they didn’t pay for protection, their stores were burned to the ground.

I would watch people driving to and from work in Mexico and wonder what kind of hell they were living in as they cowered in terror or dodged gun fire day in and day out.  Those who could afford it moved to the safety of El Paso, Texas just across the Rio Grande.  But most of the everyday folks had to stay and face their fears.

One day a bullet hit our campus. It was lodged in the oak door to Bell Hall a couple of buildings away from mine.  I felt uneasy sitting in my office and my husband recommended that I not spend any time in front of the window.  This did little to dispel my worry.

A few months later, a woman pushing a baby in a stroller in downtown El Paso was hit in the leg with a bullet.  She was not badly injured; and I thanked God for saving the child from harm. 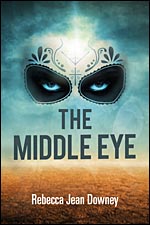 I finally decided to write about all this.  What else could I do? During my research for my first novel about Mexico, I discovered that more than drugs were moving across our borders.  Children were being kidnapped—20,000 a year—and many of them transported across our international bridges.

Rebecca Rebecca Jean Downey is an award-winning writer with a journalism degree from Indiana University and a lifelong interest in criminal justice.

​During Rebecca’s first job as a newspaper reporter, she was assigned to cover law enforcement agencies and the courts.  Since then, Rebecca has free-lanced for national law enforcement publications.

​She and her husband, Mike, now live in El Paso, Texas where she works as Assistant Director of Institutional Advancement at The University of Texas at El Paso.

Her second novel, The Devil Eye, is scheduled for release by Tate Publishing in December 2013.  In The Devil Eye, Rebecca confronts the truth about gun trafficking.

Thanks for sharing your perspective of the US-Mexico border. Living close to the Canadian border, it's not something I much consider. I hope your fiction helps illuminate the problems in a way news media (and politicians) have not.

Your cover is intriguing and fits your genre well.

Thanks for an interesting and thought provoking blog, Rebecca. I knew it was dangerous in the border towns, but had no idea it spilled over into Texas, too. Also, it breaks my heart to think of the children being kidnapped and facing a horrible life.

Thank you for this blog, Rebecca. I’m familiar with problems along the US-Mexico border since I am from Arizona and have lived in Southern California. But I didn’t realize that 20,000 children are kidnapped each year and moved across borders. It’s chilling and heartbreaking.