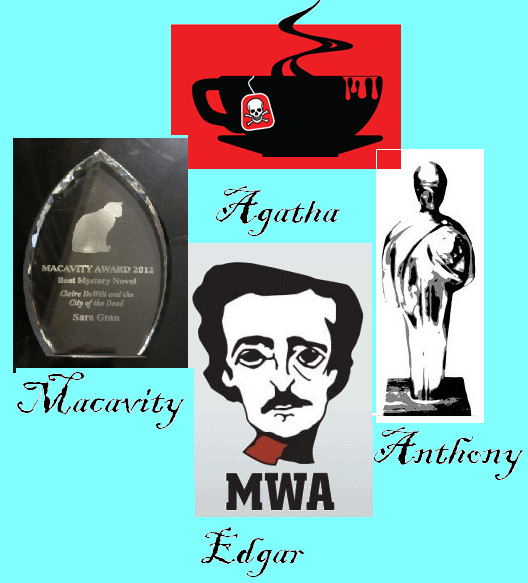 Significant achievement in the field of short mystery fiction is recognized by a number of organizations. This list concentrates on awards presented by organizations in the United States.

For a comprehensive list of crime fiction awards given internationally, please see:
http://awards.omnimystery.com/mystery-awards.html

The Agatha Awards have been presented since 1988 by Malice Domestic at its annual conference. The awards recognize the traditional mystery written in the style of Agatha Christie, having no explicit sex, excessive gore, or gratuitous violence.

Nominees are selected by ballot from persons registered for the conference by December 31.

Nomination forms are tallied by the Agatha Committee. The top five choices in each category are placed on the ballot. Attendees vote by secret ballot at the conference and the awards are presented at the banquet. The awards are porcelain tea pots.

The Anthony awards, named for Anthony Boucher (writer, critic, and a founder of the Mystery Writers of America) have been presented since 1986 at the annual Bouchercon World Mystery Convention.

Nominating ballots are emailed to the registered attendees. Awards are determined by the persons attending Bouchercon.

The Barry Awards have been presented annually since 1997 by the editorial staff of Deadly Pleasures. The staff requests that an author submit a copy of his work for review.

This year does not feature a short story category. 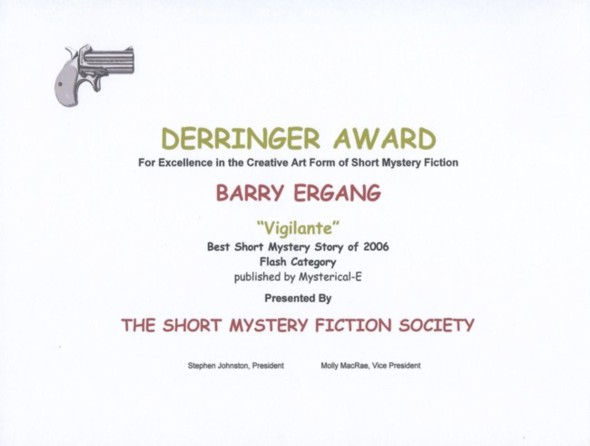 The Derringer Awards, named after the palm-sized handgun, have been presented since 1997 by the Short Mystery Fiction Society (SMFS). Presentations are made in March. Members and editors may submit stories for an initial blind consideration by volunteer judges who select five nominees in each category. To be eligible to vote for the awards, a person must join the SMFS by December 31. 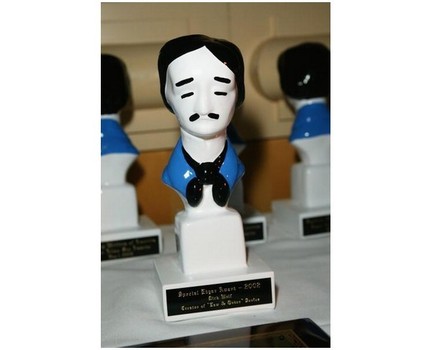 The Edgar Allan Poe Awards have been presented annually since 1946 by the Mystery Writers of America. Authors who submit their stories for consideration must meet the requirements for active status in the MWA whether or not they are members of MWA.

Short stories are considered works up to 22,000 words from approved magazines, periodicals, anthologies, and websites. Submissions meeting the requirements may be made online at:
http://mysterywriters.org/edgars/entry-form-for-short-story/

Following are the approved periodical/webzine publishing companies at the time of this post: 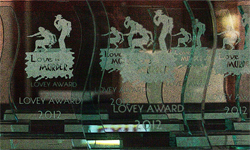 The Lovey Awards, presented since 1998 at the annual Love is Murder conference, recognize excellence in ten categories for books or stories published during the previous calendar year. Persons attending the conference may submit no more than one work in each category. The awards are selected by the registered attendees.

Each year since 1987, members of the Mystery Readers International organization vote and present the Macavity awards in four categories. The Macavity award is named for T.S. Eliot’s  "mystery cat" in the Old Possum's Book of Practical Cats.
For more information, see:
http://www.mysteryreaders.org/macavity.html

Honoring publications since 1981, the Shamus awards, created by Robert J. Randisi, have been presented by the Private Eye Writers of America. PWA committee members select the nominees and winners in a manner similar to the Edgar selections. A “private eye” is considered the protagonist of a mystery who is a professional investigator, but not a police officer or government agent.

Presented since 2006 by the International Thriller Writers, the Thrillers are announced at the annual Thrillerfest conference. Short stories of up to 35,000 words are considered so that novellas qualify for submission. An entry must be published in print or e-zine format during the previous year.

Nice list. But in regard to the Barry Award, it's my understanding they've permanently eliminated the short-story category. Too bad about that.

Thanks, Barb. I'm sorry to hear that, too.

I love seeing lists of award winning books and authors - it's great when you are looking for something new to read. Thanks, Paula.

Thanks for this list, Paula. Quite comprehensive and useful. I'll save it for some (probably far-off) day when I write more short stories. :-)

Thanks, Paula. Your entire series of blog posts on short stories is terrific.

Thanks ever so much, Paula, for all your blogs with good information on the short story field. It makes me want to sit right down and write another short story right now. :-)
It's good to see there is a good market for short stories.

Thanks for putting this together, Paula. The only award I've ever gone after is the Derringer and I've been lucky enough to win twice. Don't mean to brag (even tho I am), but they mean a lot to me and I can see how any of these awards would boost a writer's confidence.

Thank you so much to everyone who has looked in on this and the other short story blogs and to those who have made comments. I have truly enjoyed learning about mystery short story opportunities as I put the series together. Please stay tuned for next week when we'll have excellent advice from three first rate mystery short story writers: Barb Goffman, B.K.Stevens, and Art Taylor.