LIONS AND ELEPHANTS AND SPRINGBOKS, Oh My 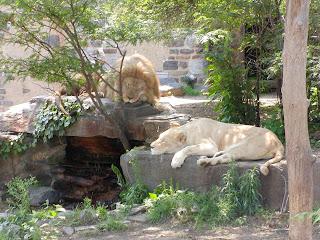 LIONS AND ELEPHANTS AND SPRINGBOKS, Oh My

Starting August 13, I will be traveling to and then traveling in Tanzania, Africa.

The trip should take two weeks.  My wife and I have endured long flights to and from New Zealand.  We are as prepared as we can be for more time than anyone should have to spend in a coach seat in an airplane both going to Africa and again when we return to the United States.

We didn’t have to get shots but we were advised to take medication to avoid malaria. We will.

My wife and I, along with two friends who are great people to vacation with and eleven people we have not yet met, are going “on safari.” We won’t be shooting animals with anything deadlier than a camera.  We are promised lodges and “luxury tents” in national parks, but the tour cannot guarantee which animals we will see.  There is a “roll with the punches” clause in the information we have.  We will visit villages and schools as well as trying to find wildlife.

We have watched movies and read books to prepare, but I’m certain the reality will be, uh, really real and different. We will be in southeast Africa just a little south of the equator.  So the water will spiral down the drain in the opposite direction than it does here.  It did in New Zealand.  The seasons are the opposite of what they are here so it should be the cooler time of the year.

I’ve learned that Arusha, Tanzania is a sister city to Kansas City, Missouri.  You may hear more about the trip when I return.
Posted by Warren Bull at 12:00 AM

Warren, it sounds like a fabulous adventure! I hope you have a wonderful time and look forward to hearing about it!

Will you be staying at Treetops Hotel? It's probably a tourist trap, but it sounds like fun. My dad stayed there years ago. Evidently, it's like a tree house. Once in a while they have animal visitors, like the gorilla that got in while Dad stayed there. Kind of reminds me of an opening line, "A gorilla walks into a bar..."

Sounds very exciting! Don't forget to write about it.

Safe travels and enjoy your adventure! Hope you'll come back with many stories to tell.

Have a wonderful trip, Warren! Can't wait to hear more about your adventure.

What an adventure! I look forward to your photos and stories. Safe travels.

Your trip sounds fabulous! I've always wanted to go to Africa and go on a safari precisely like the one you're doing on. Please have fun for me :-)

What fun! An acquaintance di one of the "safaris" a few yearrs ago, had a fabulous time and brought back tons of pictures. Have a great trip!

Thanks for the good wishes. I will be staying in a tent but not a tree house.

Wow, sounds like an exciting trip. I had a friend who went on a luxury safari. The tents were floored with all the amenities. I guess that's as close to a Marriott as you could get. Looking forward to your pictures on return. Have a great time.