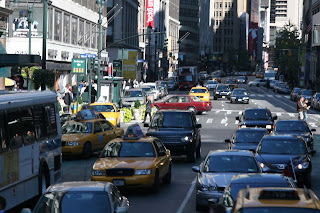 The group Missing Persons sang, “Nobody walks in LA.”

I recently went to Manhattan to see my sister, Tina, conduct her women’s choir.  Tina and other faculty at Oregon State University conducted three university choirs first at the Church of St. Paul the Apostle and then at Alice Tully Hall in Lincoln Center for the Performing Arts.

My wife and I had a wonderful time. As a pedestrian I was struck… Oops, let me rewrite that. As a pedestrian, I quickly found out that in Manhattan there is a certain rhythm to walking.  Red lights, green lights, walk and don’t walk signs served more as suggestions than absolute rules.

At red lights taxi drivers and other motorists revved their engines while waiting for the chance to charge ahead. During that time, streams of walkers flowed across street in spurts and dribbles.  A red light for oncoming traffic along with a Walk sign for foot traffic was a pretty good clue that you’d be able to cross the street without getting run over.  But it wasn’t a certainty. Taxi drivers in particular would sneak through when there was a break in the action.

A green light with a Don’t Walk sign wasn’t a promise to vehicle drivers that walkers would not step into the crosswalk.  Native New Yorkers were able to time how to cross in front of oncoming traffic with inches to spare, which, of course, did not mean tourists could safely repeat their actions.  I tried. Once.

I also discovered any time I came to a corner, whether I wanted to go ahead, left or right fifteen to twenty people came at me walking at various speeds singly or in groups.  I had to sidestep and move forward at the same time.  It was sort of like driving a bumper car when actual bumping was discouraged. In groups larger than three it was very difficult to keep tabs on the people I was walking with.  Individuals move at individual speeds paying varying amounts of attention to others in the group.
I admit walking in Times Square can be distracting. I saw the singing cowboy dressed only in his underpants, Elmo, Darth Vader, Hello Kitty and multiple interpretations of Lady Liberty.  That could have made a difference.   My wife stopped to help an inebriated woman push a woman in a wheelchair up onto the curb and I temporarily lost track of her.

Nancy Pickard does a wonderful job of describing New York in her But I Wouldn’t Want to Die There. Pete Hamill makes New York come alive on the page.  What descriptions have you read that rang true?
Posted by Warren Bull at 12:00 AM

I’m fond of S J Rozan’s novels set in NYC. Ed McBain has the 87th Precinct series that I have also enjoyed.

Stephen King set Christine around my hometown, the York/Harrisburg area. He described the radio station as the "Susquehanna sound" making me mentally hear the station's jingle and also described driving across old concrete bridges. I could hear the slap of the tires crossing the bridge. Of course, Stephen King describes everything well, but because I knew the area well, that book scared the hell out of me and has stayed with me years later.

Laura Lippman sets her books in the Baltimore area, my "big city" during my formative years. Her characters occasionally travel north on 83 to York County where I grew up. She describes it well.

Joel Goodman writes descriptions of Kansas City that really ring true. There's a discussion going on on Twitter about how important setting is in mysteries.

Margaret Maron may win the prize, though. In her first series, she brought NYC to vivid life, and in her second, she brings North Carolina's farmlands to equally vivid life.

Living in NJ and having relatives in NY, I have often visited the city and am always impressed with how lively it is. Just walking on the streets and people watching is fascinating. I used NYC in part as the setting for my spy thriller DEATH LEGACY. Perfect setting for an exciting novel.

As a native New Yorker (worked here since 1977; lived here for 10 years & now commute in from LI every day), I got a kick out of your accurate description of walking in NYC. You definitely have to pick your battles here. Times Square is an absolute madhouse but you summed it up pretty well.

Warren, I love your description of walking in NYC, which reminds me of several trips I've made there. As for other writing that evokes the place, Cathy Pickens' Done Gone Wrong take readers on a virtual journey to Charleston, SC, and is particularly interesting because it takes her protagonist from her upstate home setting to the very different lowcountry.

Ms. Moreno and I are happy you enjoyed your stay here, Warren, and glad you made it out alive :)

You forgot to mention the hazards of bicycle riders who believe that traffic lights and one-way streets don't apply to them, as well as the toddlers who zoom down the sidewalks at breakneck speed while mommy is focused on texting. Still, NY is our favorite city (although I still miss Vienna) and we are currently writing about murder in Lincoln Center!

NYers are walkers, I can remember not thinking anything of walking 50 to 70 blocks to do something. Loved it. They have all kinds of bike lanes here in Portland, major waste of tax payer money since only a few are well used.
Patg

Warren, the one and only time I was in NYC, my niece, who lived near the city at the time and visited it often, was very nervous ushering her mother and two aunts about as we gawked at everything we saw. I think I was her biggest worry. :-)

I agree with the others about many of the authors mentioned that I've read, but I need to add Liz Zelvin, a native of the city, who writes the "Death will . . . series featuring Bruce Kohler and his friends Barbara and Jimmy.

Warren, good for your sister! It must have been thrilling conducting in Alice Tully Hall.

You really nailed--and, thankfully, survived--walking in Manhattan. In the boroughs people tend to walk like the rest of America.

Having grown up in NY, the traffic doesn't faze me. Though I must admit I won't drive in Manhattan any longer. I love walking around the city, even more than seeing a Broadway show--just as entertaining, and you never know what you'll see next:)

I love New York City. It's absolutely true what you say about the surging crowds, although we were there at Christmastime and found that the crowds overwhelmed the traffic at most midtown intersections!

I used to read Marissa Piesman's New York-set series just to get the New York scenery and her character Nina's constant thoughts about everything and anything. Sad that her series has now ended, but you can find the books on the secondhand market (though not e-books yet).

If you'd like to experience the out-West weirdness of art colony town Marfa, Texas, where GIANT with James Dean was filmed in the fifties, MURDER BY THE MARFA LIGHTS by Denise Weeks makes that city and its eccentric denizens come alive. The descriptions of the Marfa lights will take you there. I like to think that Texas is a character. And what a character!