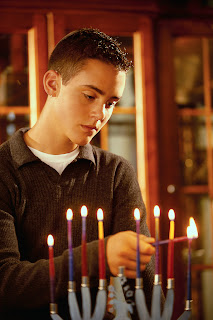 A few weeks ago I finished reading People of the Book by Geraldine Brooks. The main character, Hanna, is called upon to work on a fifteenth century manuscript, a Jewish haggadah. The book is real and known as the Sarajevo Haggadah, but Hanna, and the story of how the book survived through the centuries is fictional. The book starts with Hanna, and then goes back in time following the haggadah, through World War II then returns to Hannah and then back even further in the haggadah’s history until eventually the reader finds out who the original artist and writer was. Not only did the book follow the haggadah’s history, but it follows the prejudice and suffering of the Jews through the centuries. Brooks did an amazing research job to write this book. Did you know that at a certain period in history to get the finest drawn lines a single neck hair from a young white cat was used? Or the parchment of a certain time was made from a now extinct type of sheep? 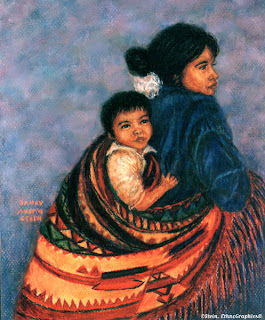 Today we shudder to think of the horror inflicted on people by the Nazis, not only of the Jews but the Gypsies and others, too. And yet our country is not without blame, either. We just about decimated the Native Americans who lived here first and took their land from them forcing them eventually onto lands often far from their native land. We not only condoned slavery, but even after that ended, blacks have continued to suffer discrimination. Other groups, like Japanese Americans interred during World War II, have been judged by their heritage instead of by their merits. And many Hispanics have to deal with discrimination, too.

When my parents started dating, my mother’s father, Grandpa Jones, was appalled and very much against their marriage. Grandpa considered my dad a foreigner, even though he’d been born in this country. In grandpa’s eyes with a name like Hovanic, he wasn’t a true American. Adding to that, my dad was a Catholic. and just as bad,  he was a Democrat, and worked in a factory and carried a lunch pail to work. Grandpa Jones was a farmer, and belonged to Champion Christian Church, but rarely if ever actually went to church. He was a Republican although I never heard him discuss politics and his ancestors had been in America over a hundred years. The fact that my dad was intelligent, tolerant, a hard worker and had a year of college, too, something rare in those depression years, didn’t impress my grandfather as it should have. At least it didn’t then although eventually he became quite close to my father. 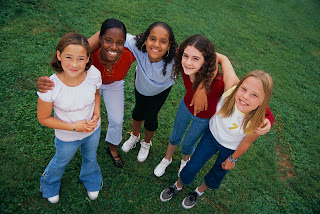 I’d like to believe with time and a more connected world through travel and the internet, we are becoming a more tolerant and enlightened people who are respectful of other people’s cultures, nationalities, race and religions. Unfortunately, I think that’s wistful thinking.  After 9-11, prejudice against Muslims ramped up. It didn’t matter that the Muslim religion is a peaceful religion; people tend to think that a few radicals, who have perverted the Koran, stand for Muslims as a whole. That’s as ridiculous as thinking the Ku Klux Klan and the Nazis both represent Christianity. Both were made up of Christians, who perverted the Christian message. It saddens me to think that with the Boston bombings, the Muslims will again have people believe they’re all terrorists setting them back to the days after 9-11. 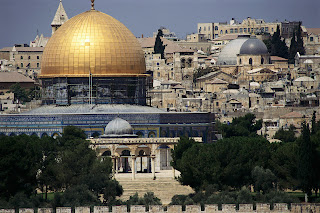 I’d also like to think I’m free of prejudice, but that would deny  the truth. I have my prejudices as I think most people do whether they’ll admit it or not. If I come across someone covered in tattoos and piercings, my impression is definitely negative. Not that I think they’re bad, it’s more that I think they’re weird. If I hear someone spouting conspiracy theories, I’m resistant. I’m also repulsed by someone whose conversation is peppered with lots of swear words. If someone questions the validity of global warming and doesn't believe man is causing environmental damage, I think they’re delusional. So am I prejudiced? I’d be in denial if I thought I wasn’t. I may be delusional about other things about myself, but I think I’m honest about that.

How about you? What kind of prejudices do you have?

Love Ms. Brooks' work. Have not read People of the Book, but just finished Year of Wonder.
Yes, I have my share of prejudices. They have to do more wiith intellegence than race or religion.

As a white middle class male, I know I have no clue of the prejudicial treatment others receive, even though I have been subjected to some over the years. The best someone like me can hope is to be cognizant that I do not know and should not presume. All I can try to do is treat fairly everyone I meet, and take umbrage when I witness discrimination against others.

I try not to discriminate. I treat people fairly. What I hate to see in this country--we try to practice those values set down in the U.S. Constitution--but because of the freedoms and right we enjoy, others take advantage of us. They don't share our beliefs, but they will hold us in contempt if we question their motives. We must walk a fine line to ensure equality, and yet some enter the country, want our benefits, don't share our values and want to take without giving. Perhaps that is my prejudice. Come and share, but if you take advantage without giving back--go home!

Prejudices are strange things. At one point, I went to a medical practice (HMO) where one of the doctors was Jamaician & had a pronounced Jamaician accent. My only experience with Jamacian men up to that point was as drug dealers (ganja!) & I found almost impossible to remove that image from my mind and listen rationally to what he had to say.

I remember, as a kid (who was to be seen and not heard) listening in on adult conversations, many of which concerned the IRA and similar matters. One uncle was considered suspect because he's entered into a "mixed marriage"--his wife, while born in NYC, was an "Orangewoman" with roots in nothern Ireland.

KB, I didn't mention that, but I have the same prejudice to some extent. Especially if it's ignorance because of laziness and feeling knowledge isn't important.

Jim, I know I haven't experienced a lot of it, but as a woman I've been overlooked when buying building supplies even though I was spending a lot more than a guy at the counter buying very few things. Also, growing up in a rural area where there weren't a lot of Catholics, I remember a history teacher/coach who wanted me to explain the Inquisition and why Catholics would do this. I was a shy kid who had no clue.

I hear you, E.B. Again, I live in a rural area and don't come across what you're saying except what I read and hear on the news.

Funny, KM, about your uncle. Prejudice goes across the spectrum. Look at the battle between different sects in different religions.

My grandfather has a prejudice against black people even though I don't think he ever knew one. I have lived and worked in places where, as a Caucasian male, I was the minority. I recommend it to majority people to get just a taste of what being a minority is like. When someone approaches to convert me. I turn my ears off and move away quickly.

We're hard-wired for prejudice. Evolution demanded that we defend "our own" against "others" in order for our genetic line to survive. It's only in our pluralistic society that our brains tell us to fight eons of evolution. No wonder those who promote prejudice find willing followers. And no wonder we cannot eradicate prejudice. It truly is human nature. It's how we act upon our prejudices that matters.

Warren, I was lucky that my father was not only prejudiced against blacks, he, in fact, spoke against it years before it became popular. Once when my youngest brother was going through an area largely populated by blacks, he said, "I'm glad I'm not black." My parents were shocked and surprised and asked him why he felt that way, and he said, "Because there faces wouldn't look good with ice cream on them." He obviously only liked vanilla ice cream.

What you say makes sense, Anonymous, and yet small children don't have such prejudice. They accept others the way they're treated. It's only with age they start listening to others.

Warren, I agree with you. I was the only woman on the midnight to eight shift in a steel fabrication plant, and when a layoff came, I got a pink slip because "the only openings are in the plating room and women can't run platers." I went to the union ((I'm still a proud, if inactive, Teamster) and they made sure I had a chance to try it. When business picked up, the next 3 plater operators they hired were women.


After an industrial accident (I wasn't badly hurt, but I no longer have the manual dexterity for the welding I was doing for most of the previous year) I used my workman's comp settlement to get certification as a special ed teacher. I was one of only 2 whites in an inner city school when the principal said she was going to make sure the white teachers were removed. I went to the union again, and while the outcome wasn't as satisfactory as I would have liked (it seldom is in these cases,) I did find a job in another school system and was permitted to break my contract without the usual penalties.

Anonymous, I agree we seem to be hardwired for this behavior. IMHO,we're hardwired for an "us vs. them" mentality that kicks in particularly hard when there isn't "enough" to go around. For most of human history there wasn't enough for everyone. In some cases there still isn't, or we perceive our "needs" to be so great we don't think there is. Then it's obvious to us that our group deserves what is available, and we find reasons why the "them" are somehow inferior and don't deserve a fair share.

Wow, some deep thinking here. I understand about worrying when there isn't enough to go around, but I also wonder about the greed of those who are more than comfortably well-off with mega salaries, who oppose anything that helps those who are seriously hurting. I consider myself comfortably well-off, but I'm probably lower middle-class, and yet my tax person, without naming names, said I give much more to charities than her much wealthier clients. Are they fretting if they gave more they couldn't afford a bigger and better new car every year?

A few years ago I took a DNA test to find out my heritage since I was adopted and don’t know my biological family history. The results were fascinating. It appears that my ancestors were from all corners of the earth. I’m descended from people who were Northern Irish, Basque, Afghani, Polish, Tsongan (Africa), Buddhists from India, Transylvanian and about 140 other types in varying amounts. It was a good lesson not to judge based on race since I think we’re all related to some extent.

Wonderful and thought provoking post, and I'm really appreciating the comments here that are respectfully written and allow for honest disagreement without becoming disagreeable in tone.