A Visit to Alcatraz, by Carla Damron

“Why do you want to go to Alcatraz, for heaven’s sake?” This question came over the phone from my eighty-four year old mother. My husband had a conference in San Francisco and I tagged along because, well, it’s SAN FRANCISCO.  While he was tied up in meetings happily learning about “Data Mining and Text Analytics,” and other fascinating statistical stuff, I booked a trip to the famous fort and prison.
Alcatraz is a little over a mile from the city. Clear blue skies and a gentle breeze made the quick boat ride to the island quite pleasant. A sea lion accompanied us for part of the trip.  Once we landed, I climbed the hill to the main cell block. 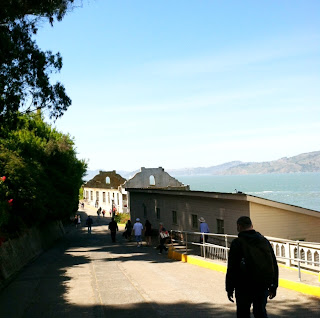 I found the audio tour to be fascinating. Guards, wardens, and inmates provided much of the narrative.  I’d been to other prisons, so the small, dismal cells didn’t shock me.  A prison isn’t supposed to be comfortable, and given the close-to-perfect climate of the place, it really wasn’t that bad. 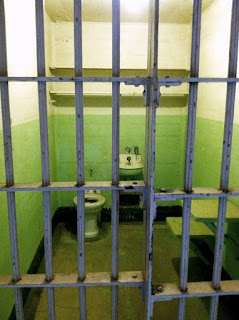 On several walls, I perused the faces of some of Alcatraz’s most famous prisoners. No surprises there, either: Al Capone (who had organic symptoms due to syphilis while he was there), George “Machine Gun:  Kelly (“a nice guy,” one of the guards said), Robert Stroud (the Bird Man, not the quiet, meek character Burt Lancaster portrayed in the film), and the gangster Mickey Cohen.  As a mystery writer, I know about these guys. In fact, I have a strange fascination for them.  Did you know Mickey Cohen was actually quite short? That he went to a “special school” as a kid and only learned to read and write as an adult so he could impress people?  It worked, too—the gangster hobnobbed with Hollywood stars like Frank Sinatra and Judy Garland.  At one point, he claimed to be reformed; the evangelist Billy Graham tried to convert him to Christianity. All the while, though, he was blackmailing Hollywood figures and continuing to control the West Coast mafia.  I find contradictions like this intriguing. Isn’t it far more interesting when we encounter an antagonist that has some complexity?
Perhaps the hardest thing about serving time on Alcatraz was its proximity to San Francisco. From the small, dusty recreation area, the inmates could see the city. On a Friday night when things got festive downtown, they could hear the bustle, the traffic, the laughter. The sounds of people embracing their freedom.  “That was the cruelest thing of all,” one inmate said. 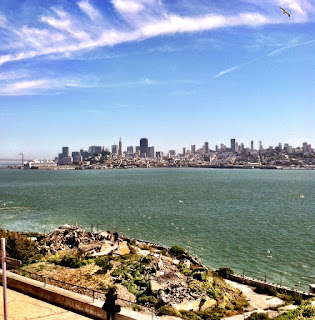 Over the twenty-nine years that Alcatraz served as a prison, there were fourteen attempted escapes. Most ended violently, though a few inmates made it to the water where they drowned.  However, in 1962, three inmates, Frank Morris, Clarence Anglin and his brother John Anglin, carried out an intricate escape plan (dramatized in the 1979 Clint Eastwood film). They used improvised tools to chisel out damaged concrete and left papier-mâché heads decorated with human hair in their bunks. They climbed an air vent, ran along the prison roof, and entered the water on rafts made of raincoats they had sewn together.  While authorities had claimed they likely died in the water, others hold to the belief that they did, in fact, survive. Remnants of a raft were found on nearby Angel Island, and the oar found nearby came from Alcatraz. The US Marshals Service continues to investigate: “We just don’t give up looking for anybody,” said Supervising Deputy Mike Dyke of the U.S. Marshals Service. “I think probably the brothers lived… but there’s a chance that all three of them could have lived and they just split up once they left. There’s no body recovered. I can’t close the case.” (KCBS Newscast, Feb 8, 2011).
Why did I go to Alcatraz? Call it research.  As a mystery writer, I’m fascinated by crime and its perpetrators. Walking the dusty corridor along the cell block, I could picture Cohen and Capone and the Anglin brothers. I had a brief taste of what life had been like for them. Hopefully, this will make me a better writer: multi-dimensional characters, even (especially) bad guys, make for richer fiction.
What criminals have you studied in researching your mysteries?
Posted by carla at 12:00 AM

When I visited Alcatrz a few years ago, I sent postcards back to a number of my buddies, including a few who were incarcerated (only the ones with a sense of humor, though) One of them wrote back, "Thanks for the postcard. I enjoyed it--it's been a number of years since I've seen the outside of one of these places."

I found Eastern State Pen in Philadelphia to be scarier. The idea of years of solitary confinement is depressing, and it pretty much drove all the inmates crazy. They run a "haunted prison" halloween program in the fall.

The Wyoming Territorial Prison is another grim place that's open to the public, especially thinking about how cold it must have gotten in the winters.

I’ve been to Alcatraz as well because of its history and the great view of the city you get from the travel to and fro.

I am a research laggard when it comes to learning about actual criminals. The only folks I “studied” were people I saw in action while in business or the crimes I read or hear about.

I must admit that after reading KM's comments, I wished I could have tagged along.

I, too, must admit that I've never studied a criminal. I have read about cases from which I've taken an element of the crime and inserted it into my WIPs, but I haven't based any of my villains on real criminals. Having read your novels, I can understand how that would fit into your MC's world.

KM- you're so right about other prisons. It isn't just the architecture- it's like desolation and pain lingers in the air. This was especially true of our Central Correctional Institute in Columbia SC before it closed.

Thank you for the virtual tour. Some places definitely evoke emotion and provide lots of creative inspiration. One of my favorite books is Al Capone Does My Shirts by Gennifer Choldenko. She imagines what life would be like for the family of a warden on Alcatraz.

When I visited Alcatraz a former inmate had a book signing just outside the prison entrance. I can’t remember his name and I regret not buying his book. I'm sure it would have been fascinating to read.

Fascinating! Thanks for the virtual tour of Alcatraz, Carla! I'll have to visit there someday. Research, what fun, eh?

Carla, I enjoyed reading your thoughts and experiences on Alcatraz. Although my daughter lives near S.F. it wasn't until this March that I visited Alcatraz with her. What a fascinating place. I was totally enthralled by the history of not only the prison, but the island, too. My daughter had been twice before, but she said she enjoyed it so much more with me because we took our time to listen to the audio tapes at each stop. I'd like to go back in the summer, too, when the gardens are open.

My older son lives in San Francisco, and my husband and I visited Alcatraz one vacation several years ago. What a depressing place, but also so fascinating! I bought a T-shirt in the prison gift shop, and on the back it says: "Regulation #5: You are entitled to food, clothing, shelter and medical attention. Anthing else you get is a privilege." That says it all.