Some Enchanted Evening by Linda Reilly 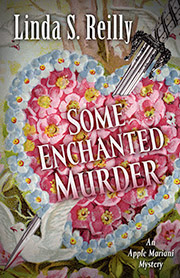 Five Star Publishing released Linda Reilly’s first published novel Some Enchanted Murder on April 13th. Linda gave me an advanced copy. Once reading, I found myself enmeshed in a page-turner. Popular culture from the 1950s and 1960s influences Linda’s characters. Main character, Apple Mariani, isn’t quite old enough to get the references, but she receives help from her Aunt Tressa, the woman who raised her. The title, Some Enchanted Murder, is a take-off from lyrics of the song, “Some Enchanted Evening,” from the 1958 movie, South Pacific, which was adapted from Tales of the South Pacific, a book by James Michener. It’s up to Apple to link the past to the present and solve the murder. Please welcome, Linda to WWK. E. B. Davis

2. How long did you spend on the script, and when and why did you send it to Five Star? I spent about a year and a half on the script. I sent it to Five Star after another small publisher (Poisoned Pen) rejected it. Incorporating some of the excellent suggestions offered by the PP editor, I made some revisions, and then spent the next few months reading all the Five Star cozies I could get my hands on. I came to the conclusion that my cozy might be a good fit for them, so I submitted it along with my query. The day I received the acceptance e-mail will be etched forever in my mind.

3. It’s my impression that Five Star sells most of its books to libraries. While this may initially sell books and garner readership from library patrons, are sales lost due to the free distribution by libraries? Do you know on what basis do libraries order the second in series? I don’t think it hurts sales, because the book is somewhat pricey. Five Star books are beautifully bound to withstand years of library use and abuse, but the one drawback to that is the retail price ($25.95). That’s why I encourage readers to “request it from your local library.” As for the second book, I’m not sure how the libraries determine if they’ll acquire it. But first I have to finish the manuscript, and then Five Star has to accept it!

4. Does Five Star have the electronic rights to your book? Yes, they do. Should they decide to go to an e-version, however, I don’t think it will happen until the end of 2013 at the earliest.

5. Could you provide us with the book jacket write-up?  Sure thing: Paralegal and title searcher Apple Mariani is accustomed to solving mysteries—mysteries such as lingering liens and missing heirs. But when appraiser Lou Marshall is stabbed with an antique dagger at an estate sale, she finds herself plunged into the heart of a murder. For starters, she learns that the victim had entrusted her with a decades-old valentine minutes before he was killed. Then Apple’s Aunt Tressa—the victim’s new squeeze—is pegged as a prime suspect, and their elderly friend Lillian goes suddenly missing. Was Lillian kidnapped, or worse, because she witnessed the murder? Despite the local police chief’s irritating lack of concern, Apple is sure her friend is in trouble when a cryptic call from Lillian’s cell phone awakens her late at night. Still haunted by childhood memories of her own mother vanishing, Apple is determined to find Lillian before it’s too late. From the shelves of a local antique shop to the culinary horrors of the grimiest diner in New Hampshire, Apple and Tressa collect a series of clues that seem maddeningly unrelated. But time is running out, because a desperate killer­—a killer bent on keeping the truth buried in the past—is still walking free . . .

6. Is there a backstory of how you created this plot? Yes! A former co-worker of mine, who’s both a title examiner and a surveyor, was chatting on the phone with me about a title she was searching for my company. An abutter was disputing a boundary line, and Maureen was researching it. The abutter’s claim sounded like nonsense to me, and when I asked her who searched the title for the abutter, she exclaimed, “The broker did it!” That one sentence planted the seed, and I envisioned a cozy series with a serious-minded paralegal and her eccentric Realtor aunt. Some Enchanted Murder was the result. I thank Maureen to this day for that spark of inspiration. As for the plot itself, I knew only one thing when I started writing: a major revelation had to come from the Registry of Deeds.

7. How did Apple end up with her name?  I don’t want to give away too much, but her real name is 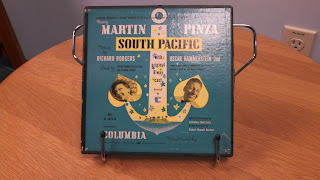 from a character in her dad’s favorite movie—The Godfather. It’s a lovely-sounding name, so think back to the movie and see if you can guess it. Hint: Michael loved her.

8. I love stories that connect to the past. Does Apple’s job predispose her to make connections? It sure does. Searching titles involves backtracking to a point in time, and then bringing the owner names forward to the present by “running” them in the indices of the Registry of Deeds. Occasionally, there’s a missing link that has to be hunted down, such as a heir whose interest is unaccounted for, or an owner with an undisclosed name change. Searching titles involves a lot of digging around in the past in order to make sense of the present.

9. Do you think that circumstances shape character or are circumstances incidental to character development? I think circumstances definitely shape character. Apple’s aversion to commitment was influenced largely by her parents’ vanishing from her life when she was at a tender age. Knowing what she knows now, and having been raised by a quirky but adoring aunt, she often wonders: if she had the choice and could travel back in time, would she choose to be raised by Aunt Tressa? Or would she opt to have her mom and dad stay with her? It’s a question that haunts her.

Bonus: Your vacation spot, beach or mountains, Linda?  Which do you think Apple would choose?  I’d choose the beach—fewer bugs there, and I love the smells and the sounds. Apple would also choose the beach—Rye Beach, New Hampshire being her favorite local beach. She’s always wanted to visit the beaches of Maui, which is one place Tressa will not go for fear of encountering some seriously oversized spiders.

I hope you enjoy Some Enchanted Evening as much as I did. You can purchase this title on Amazon.
Thanks for the interview, Linda!
Posted by E. B. Davis at 12:00 AM

Thanks for the interview, Linda. Good luck with your book.

The story sounds fascinating and that book cover is gorgeous! Thanks for stopping by for an interview.
PS Apple's "real" name is beautiful!

Thank you, Warren. Shari, I love that you know Apple's real name!

The book was a fun read, so I don't think Linda will have a problem getting the second book published. Seems as if it is destined to be a series. I hope libraries pick it up! Good luck, Linda.

Linda, your book cover is beautiful and your story sounds interesting. It's been too many years since I saw The Godfather, so I have no idea what Apple's real name is. :-)

Best of luck with you in selling lots of copies of your book.

Welcome to WWK, Linda! You've got a lovely book cover! and your book sounds absolutely fascinating. It's going right on my TBR list.

Best of luck with your new book!

Gloria, before the day is out I'll have to reveal Apple's real name. Thank you for the good wishes!

Linda, that you so much for the kind words ~

Linda, I meant to say thank you so much for the kind words ~