MEMORIAL DAY - THE BEGINING OF SUMMER 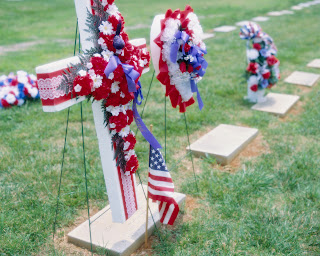 Memorial Day brings thoughts of parades, flag waving, red poppies, picnics, barbecues, a day of no school or work, and what many of us think of as the beginning of summer – forget that the calendar shows it as June 21st, most of us see summer beginning on Memorial Day and ending on Labor Day.

In truth, Memorial Day is the day we should primarily remember those of our American military service men and women who died fighting for our country. Every Memorial Day an observation of that is held at Arlington National Cemetery. There is also  a presidential armed forces wreath-laying ceremony at the Tomb of the Unknown Soldier.

The holiday, originally known as Decoration Day, was first proclaimed on May 5, 1868, by General John Logan, who headed the “Grand Army of the Republic,” which was essentially a lobbying group for Union Civil War Veterans, and was first observed on May 30th of that year with flowers placed on the graves of both Union and Confederate soldiers at Arlington National Cemetery. The first state to recognize the holiday was New York in 1873. By 1890 it was recognized by all the northern states. The south refused to acknowledge it until after World War I when the holiday changed to honor any American who died fighting in any war.

Mona Michael was inspired to write her poem, “We Shall Keep the Faith” by the poem “In Flanders Field,” by John McCrae. She wrote “We cherish, too, the poppy red that grows on fields where valor led, it seems to signal to the skies, that blood of heroes dies.” She was the one who came up with the idea to wear red poppies in honor of those who died serving the nation during war. In 1922, the Veterans of Foreign Wars became the first organization to sell red poppies that are made by disabled veterans.

I seldom go to Memorial Day Parades, but I do buy a poppy if I see the Veterans selling them at the grocery store, and I never miss planting the graves of my loved ones. What once was a tradition of only placing flowers on the graves of veterans has become a tradition for many to also plant the graves of loved ones and not just Veterans. In the township cemetery with graves of my family going back over a hundred years, I have no family veterans so I plant only the four closest to me; my parents, my son, and my granddaughter.

A few days before Memorial Day, I go to Champion Township Cemetery with flats of flowers, potting soil, bark mulch, spade, trowel, kneeling pad, buckets for the weeds and grass I dig out and a watering can. I spend almost two hours preparing and planting the graves. It's one of the few things I can do now to honor my son, granddaughter and parents..

Do you celebrate Memorial Day in any way?

Do you ever put flowers, real or artificial on a grave?

The current Jackson family plot goes back only 150+ years, but the only veteran in it is my father. My grandfather couldn’t get into the army air force for WWI, so he became a farmer and had an exemption.

My great-grandfather was a doctor and never served. His father, also a doctor, purchased an exemption from the Civil War. The sailor who got the bounty was Scottish and survived the war.

My great-great-great grandfather was another physician and was too old for the Civil War (he was an early abolitionist, woman's rights activist and healthy food advocate, among other causes).

My great-great-great-great grandfather served as a physician during the War of 1812, but he’s buried in a different cemetery. His father, my 5-greats was a Lt. Colonel in the Revolutionary War and penned the articles of capitulation of British General Burgoyne to General Gates.

Even earlier ancestors fought in the French & Indian Wars and various other Settler/Indian conflicts in Massachusetts.

I don't live close to any of those cemeteries, but when I pass by one I stop and make sure the markers are in good shape and clear out any encroaching grass or weeds.

What a fascinating history, you have, Jim. Have you ever thought of writing historical mysteries?

My brother signed up for some branch of the service and had one of the highest if not the highest scores on the test taken towards being a pilot. He hated boot camp, and when he found out he was color blind and couldn't be a pilot, he left the service after book camp.

My father had two small children when WWII started and his position in a plant that made shells, kept him from going, but two of his brothers went; one parachuted in over Normandy in the invasion, and the other fought in North Africa and Italy. One of his friends was shot and killed beside him. Thinking back now, I wonder how they always seemed to have such a wonderful sense of humor after those experiences. To my knowledge they never talked much about it. Two other brothers of my father also served, but didn't see action.

We've had many veterans in our family, but the only one I know of who died was my mother's cousin--at Pearl Harbor. She found his grave at the Punch Bowl.

We are in the fine possession of a diary that one of my great, great, uncles kept during the Civil War, which was returned to my grandfather in the 1920s from the government, which confiscated it after the Civil War. I have no idea why since most of the journal documents every ailment and misery he endured, including taking supplies across the Susquehanna River on the Union's boniest and uncomfortable horses.

I didn't know about the poppies, Gloria. I'll remember.

How lucky you are to have that journal, E.B. How interesting that must be. More people died of disease than being shot.

One of the writers in my local group is quite a Civil War buff. She's part of a re-enactment group with her husband and her book - which should be published by now - is a fictional historical novel and very well written. I'm going to have her edit my Sept. book which will have a Civil War re-enactment at Elmwood Gardens.

My father was an infantryman in World War II. He fought in the Battle of the Bulge. His division was the first full division to cross the Rhine River over the Bridge at Remagan. I helped him write a memoir of what he wanted to tell future family members.

My sister in law does the duty here in OR at the military cemetary.
Their family ties are to Mississippi, where their family goes back to mid 18th century. We have photos of many family tombstones in a little back country cemetary near Meridian that date to that time.
Patg

Oops, didn't get this part in. A few of those tombstones date to the Civil War, but we have charts showing that the family faught in the Revolutionary War too. Seems that's what could get my daughter and nieces into the DAR. :)
Patg

My father served in WWII. He was part of the second wave into Normandy. He was also stationed in Italy and North Africa. He's buried in a national cemetary about an hour away. My mother is with him. I need to visit more than I do.

I have all the letters my father wrote home to his father from Italy and North Africa. Some day I'll read them. I'm not ready to yet.

Warren, that was wonderful that you helped him. I remember the precious little pieces that he wrote and you posted. You were lucky to have a father like him.

Pat, your daughters and nieces have an interesting background. Are any of them interested in genealogy? My children go back to John Alden from the Mayflower. He was a cooper, and we have the family tree dating back to John and Priscilla's second son, Joseph.

Elaine, what memories you have, and someday you'll want to read those letters. My closest siblings live about an hour away so that's why I take care of the family graves.

This is the holiday when I most regret how our family has scattered to the winds. I have a cousin left back home who visits the graves of our moms and aunts and uncles and Grandma and Grandpa.

My mother used to put her own peonies on her parents' graves and we'd get together with all the many cousins.

Our new yard has tons of peonies and they made me think of the graveyard where my parents lie, so far away.

When I win the lottery and have my own jet and pilot, I'll just zip back to Illinois and visit the graves on Memorial Day.