Our guest blogger Kaye George joins us again on Salad Bowl Saturdays, but this time talking about music and how it informed her newest novel, which has been recently released. I met Kaye at the recent Malice Domestic, where she had the perfect musical scarf to go with her mystery's motif.

An aside: long character names--why do I do that? I now have an Imogene Duckworthy Mystery Series and the above-mentioned CCMMS. Shorter names would fit better on book covers! 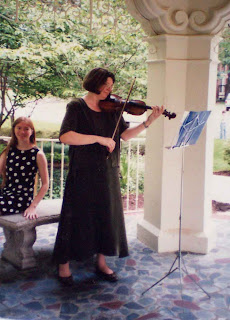 Here’s some background on the birth of this project. The series was begun a few years ago as a result of listening to the advice to write what I know. I know music. I took piano lessons from age 5 to 12 and violin from age 10 until, well, I took some lessons from a man in the Chicago Symphony in college, Sol Turner. (I looked for some mention of him online, although I doubt he’s still alive. I found, instead, his daughter, a harpist. I remember speaking to her once about being frustrated that harpists in America didn’t take their music seriously enough. (http://cso.org/About/Performers/Performer.aspx?id=5000)).

After graduation from college, where I did not major in music, but just played in the Northwestern University Orchestra, I quit playing for a couple of years. To get back into it, I took lessons from my high-school teacher since I was living in that town. A few years later, living in Detroit, I studied with a personable young man from the Detroit Symphony, Stacey Woolley (I found him online!) Hey, this is fun finding these people from my past.

All of this is to illustrate that I do know a lot about playing violin. Also about being in orchestras, chamber music groups, and string quartets. I’ve taught violin to children, I’ve done a good bit of arranging for the string quartet I played with when we lived in Dallas, and have dabbled in composing. I’ve had a bit of conducting experience, mostly with children. So I know a little about those things. 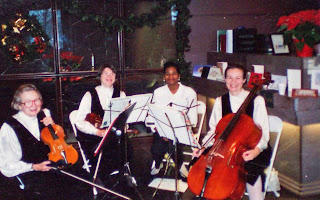 Here’s the point, finally. I decided to create a musician sleuth! I wanted her to be an actual composer AND I wanted her to be a successful conductor. For many years it was unheard of for a woman to conduct a major symphony and it’s still unusual. My character would be a barrier breaker as well as a crime solver.

I wrote the book, over a period of several years, and started querying, waiting for the world to realize what a marvelous creation I was offering. No such luck. I won’t go into the details, but many revisions, classes, critiques, and rejections later, the project finally turned into something that Barking Rain Press wanted to publish--yay!

This book is dear to my heart, since it was my first serious attempt at a mystery. (I have the standard stinkers that I wrote before this one, of course. You will never see those.) Besides making the main character into someone I wanted to be, and someone who has the same interests I do, I put her in a place I know--my mother’s cabin. In the story, it’s her grandmother’s cabin, but I describe it pretty much exactly as it was when my mother owned it. Mom never lived there, like Cressa’s Gram did, she just kept it for a weekend and summer place, but she could have used it for her home.

Here’s another funny aside: One New York agent rejected my novel and the reason she gave was that my setting was impossible, due to the fact that there are no lake resorts in Illinois. Of course, I set the novel at an actual Illinois lake resort. I could also name you several others in the same state! From New York, it’s hard to see those Illinois lake resorts, apparently.

I’m thrilled that Barking Rain Press decided to publish EINE KLEIN MURDER, my Cressa Carraway Musical Mystery! I hope my readers have fun with it and enjoy a trip into my musical world while the crimes are being solved.

Here’s the teaser: Aspiring conductor Cressa Carraway arrives at her grandmother’s cabin at a rural Illinois lake resort, hoping to find some peace and quiet so she can finish composing the symphony she needs to earn her master’s degree in composition. Instead, she finds her grandmother’s corpse in the lake. The authorities dismiss the death as an accidental drowning, but when Gram’s best friend drowns in the exact same spot, Cressa just knows something is off-key in this idyllic setting. Convinced that her grandmother’s death was anything but an accident, she fights her instinct to flee and starts looking into things herself. There are lots of people and facts to consider, from the self-important property manager and his brow-beaten wife, to their salacious son, to the elderly widow who may be lacing her home-baked cookies with a dash of poison. As the body count rises, Cressa doesn’t know which will be finished first—her symphony or her life.


Kaye George is a short story writer and novelist who has been nominated for Agatha awards twice. She is the author of four mystery series: the Imogene Duckworthy humorous Texas series, the Cressa Carraway musical mystery series, the FAT CAT cozy series, and The People of the Wind Neanderthal series. EINE KLEINE MURDER, the first Cressa Carraway novel debuts in April from Barking Rain Press. DEATH IN THE TIME OF ICE, the first Neanderthal book, will be published later this year by Untreed Reads.  The first FAT CAT book, from Berkley Prime Crime, will appear in 2014.

Her short stories can be found in her collection, A PATCHWORK OF STORIES, as well as in several anthologies, various online and print magazines. She reviews for "Suspense Magazine", writes for several newsletters and blogs, and gives workshops on short story writing and promotion. Kaye is agented by Kim Lionetti at BookEnds Literary and lives in Knoxville, TN.

It was great to finally meet you in person at Malice Domestic. I must say that I am in awe of people like you who can write multiple series at the same time. One book a years seems enough of a challenge to me. How do you do it?

Also, as a tip to your readers, they can sign up on the Barking Rain Press website to receive the first four chapters from BRP and after receiving them get a coupon for 35% off either the paperback or e-book. It's the best deal available on the e-book. For print you need to check and see if Amazon and Barnes & Noble are having a price war.

Kaye, it was good to see you again at Malice. I came home from Malice lugging bags of books, not only those given to us,but many I bought. Yours is at the top of my TBR pile.

Music is very important in my life. I took piano for one year as a child until my younger brother, a true musician, put me to shame. Although he never played the piano professionally, his talent was amazing and he played all his life. I took lessons again at the same time my oldest son, John, did. He was only eleven and soon passed me up in ability and natural skill. I got a used guitar and learned to play that, but again with quite limited ability although I enjoyed it. I played the lap dulcimer and very briefly the banjo. The love is there, the talent isn't, but I can't imagine not having music in my life. Instead of TV, I listen to music so that's why I'm so looking forward so much to reading this latest of your books.

Kaye, your Musical Mystery sounds like fun! It will make a great gift for my musician friends. I love music and dance, which I've heard called "music made visible."
So nice to meet you at Malice.
Keep writing!

What fun, Kaye. I can add your new protagonist to Immy in my list of favorites. Good luck with the new series. Your persistence is a testament to us all.

OK, Jim, I write about one book a year, too. It just takes them a long time to get published.

Malice was VERY fun this year, meeting new people and connecting with old friends. I'll never be able to quit going to Malice.

Music makes our lives richer, IMHO, just like books do.

I was so happy when I heard that this book was published, Kaye. It was one of the projects that stood out for me in the synopsis class we took together through the Guppies, and I always looked forward to reading the finished book. Now I can!

Comments like yours make me so glad I persisted with this project, Elaine--thanks!