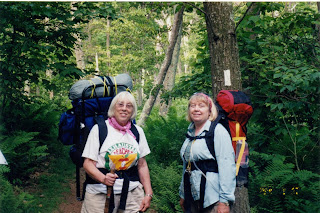 One of the perks of getting older - and we who are in the upper echelon of age look for any perks we can find - is the life experiences we've had. That is if we can remember them.

In the second book in my series, Martha, the police chief's mother, takes off on a backpacking adventure with a hunk of an environmentalist, who had been staying at her bed and breakfast. What made this such a good ending was not only how much it upset her son, but her age. Sixty year old mothers are not supposed to do something so out of character in the eyes of their sons. But I did the same thing. Not taking off with some hunk, of course, but taking up backpacking at the age of sixty. My adventure was an example of how dangerous reading can be.

It all started with Bill Bryson's book, A Walk in the Woods. The previous winter most of my siblings and I read the humorous account of him hiking the Appalachian Trail. Then my sister, Elaine, showed us a video of some AT hikers attempting the whole trail. A couple of them were older than we were. So we figured if those two older hikers and Katz, an overweight and out of shape friend of Bryson's could do it, so could we. At least Elaine and I decided we could. The other siblings opted out.

For months Elaine and I made our plans to hike the Appalachian Trail - okay, not the over twenty-two hundred miles it covers, but a section of it. Maybe in time by doing sections, we could cover the whole thing. Did I ever mention I have an overdose of optimism in my psyche? We decided to start with five days along the trail in Shenandoah National Park in Virginia.

That first day we got a late start since it had rained in the night, and we had to dry at least one sleeping bag at a camp laundromat. When we hit the trail, it was foggy and overcast. As Elaine and her teenagers, Emily, Abby and Caleb got their packs on and adjusted, I sat on the tailgate of the van. My pack was so heavy I could barely pick it up let alone sling it over my shoulder. When they were all ready to go, Caleb put it on my back. I soon had the straps tightened and followed them down the trail slightly bent forward from the weight and muttering to myself about how stupid I was to let Elaine talk me into this. As I trudged along following the others at some distance behind with my pack creaking and swaying, I was reminded of the years I'd spent riding. My pack sounded just like a horse's saddle only now I was the beast of burden. 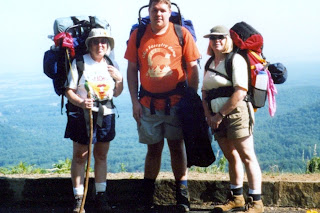 But gradually the fog and mist cleared, the sun burst forth, and the most incredibly breathtaking view of the Shenandoah Valley lay before us. We shed our packs and sat on a rocky ledge drinking water, eating trail mix and took it all in. I decided this one view made it all worth it.  Eventually we discovered the whole trail in the Shenandoah had such views.

Over the next four days, I soon managed to hoist my own pack onto my back, and I found much to enjoy about the experience. Not only did I become stronger, but the shared camaraderie and laughter with my sister, nieces and nephew made the trip worthwhile. Although we'd all been campers for years, it was a new experience cooking on a tiny stove, filtering drinking water and making sure everything, even toothpaste and brushes, was put into a bear bag every night before hoisting it up over some high branch where bears couldn't get it. We also found out that first year that this national park has the highest concentration of black bears in the east. Then there was the excitement of coming to a lodge or wayside store where we could treat ourselves to ice cream, and I might add, feeliing a little bit smug as we shed our packs outside and walked in front of tourists, who we hoped looked at us with admiration. They didn't know what newbies we really were.

When we ended our adventure that first year, it was with a great sense of accomplishment. We'd walked twenty-six miles in less than five days averaging at least five or more miles a day. That may not sound like a lot, but we were carrying close to thirty pounds on our backs and much of the hike seemed to be climbing. Not bad for a sixty year old woman, who while reasonably active, rarely walked over several miles a day. 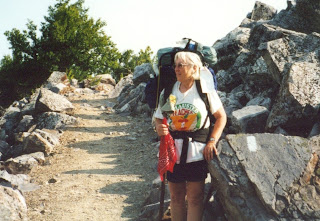 Over the following years, Elaine and I covered almost the whole AT trail in the Shenandoah as well as trails in Pennsylvania, all in four or five day excursions of between twenty-five to thirty miles. Other members of our family joined us occasionally. Our largest group was eight the following year and six the year after that, but there was always one constant, and that was my sister, Elaine and I. Sometimes there were just the two of us.

It's been three or four years now since we last went. I'd love to go again, but can't find anyone willing to go with me. One of my nephews, Matt, who went with us our second year, several years ago did the whole long AT trail. Although I'm not backpacking now, I have my memories, and they are good ones. As for Martha, my character who took off at the end of my second book, her story will be told in my next book as a sub plot. She'll be telling Catherine, my protagonist, about the murder she and Bruce encountered on the AT in Shenandoah National Park - a murder of a birder - and how they solved it.
Posted by Gloria Alden at 12:00 AM

In my early twenties, I used to hike in the Shenandoahs. It was a wonderful time and I remember it giving me a sense of peace during a turbulent time in my life. It wasn't a challenge physically, it was an escape from urban life that I wasn't used to living in. I still get a sense of peace from nature. Like yesterday, when I went shelling on the beach. But then I found an unusual bone, which set off the question what if...and a plot came to mind!

I hiked in college and graduate school. One of my memories was after an overnight hike in Yosemite my group passed a group of people who came in by bus. They looked at us like we were pioneers. Next we met a man who had been on the John Muir trail for three months. I thought about the moving target called "success."

Good for you, Gloria. I admire your perseverance. However, you lost me at the 30-pound backpack. I like walking, as long as I know I'm not far from my starting point. My idea of camping out is a Marriott. But what a wonderful experience to use in your story.

I enjoyed the post. I fondly remember when you came in to lead our book club discussion of A WALK IN THE WOODS, dressed in your hiking gear. Priceless !
Roxanne

What a wonderful story! I can handle a couple hours of hiking, but that's about it ;)

Writing from experience adds those nuances that make a story memorable. I'm not a nature person, so hiking the woods isn't for me. My personal belief is that people should stay out of the woods, it took us millenium to make our way out, why go back.
OTOH, I hope it brings you lots of readers.
Congrats on you story publication.
Patg

E.B. like you, I feel most at peace in nature. The Shenandoah has one beautiful vista after another. It takes forever to travel the Skyline Drive if you stop at each and every one. I like the way you can find plots like that bone you found when you're out exploring.

Warren, my daughter and I went to spend a few days at Yosemite a few years ago. It was a huge disappointment because we couldn't get a reservation for the campground, which wasn't my idea of camping, either, and we were put into a city of tents resembling those pictured in Civil War encampments. The upper trails and campsites were closed off because of a wild fire, and the whole bottom section was wall to wall tourists. The highlight was Lee Stetson's presentation of John Muir. He's awesome. I'd seen him at our local national park before. The views we could see were good, too.

Polly, the 30# bag was in our first year or two. After that we learned to cut back on what we needed to take and got it down to no more than 26 or 27 pounds. Actually, carrying it on one's back is much easier than trying to carry anything in front of you. The pack actually rests on the hips.

Thanks for your comments, Sue, Roxanne, Gigi and Pat. Fortunately, everyone doesn't feel like I do about hiking in the woods. It would get too crowded out there. :-)

Thanks for the congrats on my story publication, too, Pat.

My husband hiked most of the Appalachian Trail in Boy Scouts. My young hiking was usually through the woods on our farm to the swimming hole in the river that edged our property. (So I'm quite comfortable in woods.

However, later, in middle age we ventured forth with our whole family (5 kids, age 9 to 18) and another couple our age. We went canoeing in the Boundry Waters with backpacks for the portages. I recall our oldest saying as we counted up more than 100 mosquito bites on her back, "I don't care who I'm married to, when I'm 47 I'm not going canoeing.

She and the rest of them do remember that trip almost fondly. The girls especially could amaze boyfriends with their wilderness tales.

Norma, that sounds like a great trip. My sisters and I used to talk about doing something like that someday, but I don't think it's going to happen anytime soon.

My kids have fond memories of all the camping we did as they were growing up, too, but none of them wanted to attempt backpacking.

I believe I was with your Appalachian Trail group twice. Once I hiked with a broken shoulder and a waist pack. My entire goal for the trip was not to fall down so I focussed on the ground and placement of my feet on the ground.

That's why we were quite amused when Gloria informed us all that she is an introvert.

Perhaps we all have a bit of the introvert and extravert.

Thanks for the good hiking memories you generated and for the great photos.

I love this story Mom! I started to think that we should go backpacking even if for one night and relive those great memories, until I read the last paragraph. Now I am scared to be in the woods with one who blots murders! Lets just camp here in California and NO MURDERING HERE PLEASE IN YOUR BOOKS!