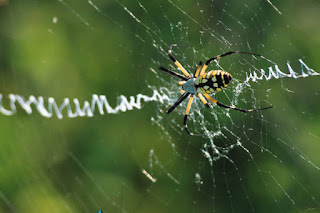 I'm a little late with this, but as the old proverb goes, better late than never. On March 14th it was National Save a Spider Day. Now some of you readers, and maybe most of you, hate spiders and can't see why anyone would want to save them. However, they're quite beneficial and important to the ecosystem. They eat many pests that can be harmful like mosquitoes and flies. Okay, so they're poisonous, but not as much as most people think. They have really small fangs and rarely bite anything larger than an insect. And yes, it sounds kind of gross how the poison they insert into the insect turns the insides into liquid. It's so they can slurp it up like a milkshake since they don't have teeth. Only two types of spiders in North America are poisonous enough to cause harm - the Black Widow and the Brown Recluse - even though a rare bite from either of them would be quite unpleasant for a few days, it's almost never fatal. More people are killed by bees and wasps. 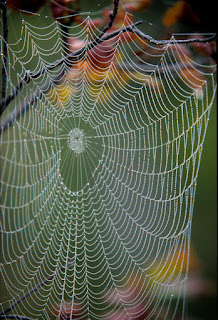 A spider is an arachnid; two body parts, eight legs and most spiders have eight simple eyes. The name arachnid comes from the mythological woman, Arachne, who was changed into a spider by the Greek goddess Athena after she challenged the goddess to a spinning contest.

According to an African legend of the Ashante tribe, we writers owe our storytelling to Anansi, a spider. This resourceful small creature managed to successfully fulfill all the requirements needed to get the Sky God's stories.

And, of course, there's that most beloved spider of all, Charlotte from Charlotte's Web by E.B. White. What child wouldn't love that compassionate, intelligent spider, who befriended Wilbur, the pig?

In spite of the general loathing of spiders, few mystery writers, to my knowledge, use them in their plots. Maybe that's because it would be almost impossible to kill someone with a poisonous spider. One mystery writer, Jane Langton, has a spider in her plot in Natural Enemy, but didn't posit it as evil, but as a harmless barn spider. The nephew of Homer Killy, Langton's protagonist, is an amateur naturalist, who watches the spider. This spider and her web is a metaphor for the villain in the book, who's spinning his web of evil in a small New England town.

Even if you don't mention a spider in your books or stories, you are still spinning a plot like a spider spins her web. And like a spider, when we edit and rearrange our plots, it's similar to a spider repairing her web or starting all over. We may cringe at the thought of spiders, but they're following their need to survive, while we, if we're mystery writers, are following our creative desire to plot murder - at least on the page if not in actuality.  Do you have arachnophobia?  Why? What other critter do you fear? If you're a writer, do you carefully plot by creating webs that eventually lead to the villain? If you're not a writer, in what way do you plot things in your life?

I love them myslef.
I used a spider when Emily has to figure out time of death. I write historicals but crime scenes have to be correct by today's standards even if the characters don't understand what they are seeing.

Anything that kills mosquitoes is a friend of mine. I have not used spiders in a plot but they would be a good devise. When I find one inside my house I transport it outside unharmed.

I don't fear spiders, but I hate and fear snakes, crocodiles and alligators--basically all reptiles. I'm not crazy about insects or the rodent family either. Large mammals are my favorites, even though I know they are the most deadly of all. Typically female--guilty.

I like spiders and snakes and all the critters that people usually fear, but I haven't used any in my writing yet. Spiders as dangers always make think of an old "Avengers" episode, where Mrs. Peel has to crawl through a small space and finds a killer spider. She rolls over and squashes it! Perhaps this is something to keep this in mind for use in writing--perceived vs real danger.

Except for the big critters like tigers and grizzley bears, the only thing that makes me cringe are rats. I have them in my barn, of course, but I live in fear that someday they may find a way into my house, although so far they never have.

I accidentally ran over a small garter snake with my lawn mower yesterday. I didn't see it until I almost stepped on it. I felt badly about it. They help control the enemies of my hostas - slugs.

I don't fear spiders. Like Warren, I transport them out of my house if they're in a bad place. Otherwise, I let them remain. You'll never have bugs in your house if you leave a few spiders in inconspicuous places--toxin-free pest control.

I agree, Linda. I only sweep up the daddy-long-legs when there get to be too many of them - up high - and I have company coming. I have an old and very damp basements and as long as they stay down there, I leave them alone.