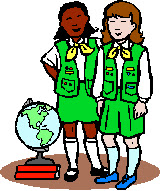 This month the Girl Scouts are celebrating their 100th anniversary. On March 12, 1912, Juliette Gordon Low started the first Girl Scout troop of eighteen girls in Savannah, Georgia. Now there are more than three million active Girl Scouts and fifty million alumnae worldwide. I am one of those alumnae, although not famous like Hillary Clinton, Martha Stewart, Condoleezza Rice, Peggy Fleming, Carrie Fisher or Madeleine Albright.

I became a Girl Scout when I was twelve. The troop lasted two years, and the highlight of my short stint as a Girl Scout was summer camp. It was a totally new experience for me, and I loved everything about it; activities like swimming, canoeing, archery, crafts, singing, nature hikes, campfires, smores and meals in the lodge. I still remember the oneness I felt with all the campers as we gathered around the flagpole in a big circle, mornings and evenings when the flag was raised or lowered and a bugle played reveille or taps.

So with those memories, when my daughter, Susan, entered second grade, I volunteered to be a Girl Scout leader. At the time, a girl had to be in second grade to join Girl Scouts. I chose to limit my troop 340 to grade level so none would be left behind when some flew up. Over the years the size of my troop varied with some leaving and others joining, but there was a core group of at least ten girls, who stayed with me until almost the end of their senior year in high school. By then I was in college, and those girls, who remained, were active in sports, music and other activities so most of our meetings consisted of only three or four girls. 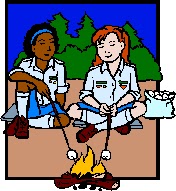 Once the girls were in fourth grade and permitted to go to camp, we went to Camp Sugarbush every year until their last few years, and I introduced the girls to the camp life I loved when I was a young Girl Scout. We also spent several weekends a year in heated cabins in different Scout camps during the winters, too. What fun we had on those weekends! We went to Niagara Falls and to Washington D.C., too. We visited nursing home and played Bingo or sang Christmas carols to the residents. We put on an international event where each girl studied a country and had displays at their table of the country plus food representative of that country. There were many other activities we did, too, including the Girl Scout cookies we sold every year.

My go-leader didn't like to camp and didn't participate in any summer activities or even the heated cabins in winter, but I had several mothers who willingly volunteered and were a big help and fun to be with. I contacted Bonnie, one of them, and asked for her memories of Girl Scout camp. She said it was the first time she'd slept in the three-sided tents, but the first memory to come to her mind was making scrambled eggs over a campfire in the pouring rain with one of the Scouts holding an umbrella over her head. She laughed about that. Apparently, it didn't daunt her because she was one of the faithful mothers, who went with me almost every year.  She also  said her daughter, Colleen, was very quiet and shy before she joined Girl Scouts, but she became more outgoing and felt she belonged with this group of girls. It gave her self-confidence.

I asked my daughter, Susan, about her memories. She remembered the camp director's son, Danny, who played the guitar and sang "Cats in the Cradle." All the girls had a crush on him. The camp directors, Mr. and Mrs. C, were teachers, and they brought their two teenagers as counselors. I got to watch them mature through high school and then as college students. Susan also remembered how several of my Scouts stole my bra one night, snuck out of our unit, and ran it up the flag pole. I'd forgotten that.

My youngest daughter, Mary, belonged to another troop that didn't last, but she always went with us on all our activities. I asked her about her memories, and she laughed and went on and on. She liked the C's daughter, Sue, the best and wrote to her a few times after going home. She loved the camp and Girl Scout songs and started singing them over the phone to me. She remembered getting last place in archery one year and asking for a bow and arrows for her birthday. With much practice, she won first place the following year. She remembered the polar bear swims, too, and how I was willing to leave my warm sleeping bag to take those few who wanted to go. I didn't participate, though.

My memories of times with my Girl Scouts, especially the summer camp experiences, include the music on the front porch of the lodge after lunch was over. I loved the sing-a-longs. Still do. I remember the rowdy camp softball games after supper. Mr. C called the plays so the team scores were so close no one could gloat. He almost always called the poorest players safe whether they were or not. I remembered the skits, how funny they were, and how I laughed louder and longer at them than anyone else. I have so many memories of those years at camp.

Recently, the Girl Scout Council of Northeast Ohio, tried to close five Girl Scout camps, including Camp Sugarbush. It would've meant over an hour's drive to the nearest Girl Scout camp. Many troops wouldn't have made that trip. The Girl Scouts in our area banded together and put up a battle. Some refused to sell Girl Scout cookies, others raised money trying to save the camp. One girl asked for money instead of gifts at her birthday party to save the camp. The council backed down and Sugarbush was saved. Currently there is a lawsuit in Columbus aiming to block the sale of the other four camps, too.

Anna Maria Chavez, the CAEO of GSUSA, feels the Girl Scouts are important in increasing self-confidence, while the media and fashion industry undermine that. Only 3.6% of the CEOs of Fortune 500 companies are women. According to her, few girls feel they have what it takes to lead, and her goal is to change that. So she's declared this the Year of the Girl and has started a compaign called ToGetHerThere with a goal to narrow the leadership gap between men and women in a single generation in whatever field they choose. I think it's a worthy goal.

Were you ever a Girl Scout? Did you go to a Scout camp or another organized camp?  What are your memories of that experience if you did?

Memories--well, how about at Girl Scout camp, when Linda K. told the story of "the pod people" around the campfire..and none of us could sleep?

Plus, I bet I could still make a lanyard.

I was a Girl Scout Leader for six years; Daisys, Brownies and Juniors. We had a lot of fun, had a lot of fundraisers, sold cookies and made crafts. The part I didn't like was sewing the badges on their uniforms. I tried every way to get those badges on and no method was easy.

Audrey quit in Juniors, and then I became a full-time sports team mom between her sports and my son's football, Lacrosse and baseball teams. Good memories.

Love it, Hank. One of my daughters remembered how I had them going on a Snipe hunt with toothpaste on their noses and shaking paper bags with pebbles in them to attract the snipes.

I fogot about lanyards. That's why I like to hear about others' memories.

Troop 100 in Florida. I still have my merit badge sash.

On a camp-out my last year in Cadettes (9th grade), the five of us who would be moving on to Seniors the following year participated in a special overnight trip. With two of the leaders, we packed everything in canoes and paddled more than half an hour away from all the younger girls for a night of primitive camping.

The experience made such a positive impression on me that I got both my sons into scouting as soon as they were old enough. My older son is an Eagle Boy Scout. My younger son is at the rank of Life, with just a few things to wrap up before attaining Eagle. I wish the Girl Scouts had a "pinnacle" rank with the clout of Eagle.

I started Girl Scouts in Brownies, the second year, and went through Juniors and Cadettes. However, after transferring into the Seniors troop, I discovered to my dismay that all the girls in that troop wanted to do was talk about boys. No hiking, no camping, no canoeing. So I was outta there. Too bad that Venture crews with the Boy Scouts hadn't been invented yet!

Suzanne, what wonderful memories you have! My boys didn't go on to become Eagles, although the oldest one stayed in the longest. I have a nephew, who became an Eagle Scout, and his younger brother ended up hiking the whole Appalachian Trail a few years ago. My youngest brother was involved with their troop in a big way, and I think that had a lot to do with their staying with Scouting.

I remember a bit about being a brownie--selling cookies--but little about GS. Nothing much ever happened in our troops, they certainly never went to camp, it was just someplace to hangout after school once a week.
Patg

Pat, that was pretty much like the troop I belonged to when I was a Girl Scout, but we did go to camp one year. Our leader quit after two years and no one else wanted to take over so that was that.

Thanks Mom for reminding me of such wonderful memories! Thank you for being the best Mother ever by introducing me to nature! My love for nature comes from you and it is one of my best gifts. You Rock Mom! :)
P.s. You forgot about snip hunting and how you made us put toothpaste on our noses and go out at night and call softly for the snips. "Here snippy snippy snippy...here snippy snippy snippy". I never did catch a snip.

I'm part of the group fighting to save our camps in Northeast Ohio. I'm thrilled that Sugarbush bush was saved, but we still need all seven camps to meet the needs of the Girls. Unfortunately we've been so stonewalled that our only recourse is that of legal action and we have filed a lawsuit. If you want to find out more go to www.trefoilintegrity.com