At fifty-six, I wonder if becoming published in the novel market was a pipedream. I know I have a case of the “poor pitiful mees.” After attending the Writers’ Police Academy in Greenville, N.C., I drive across state to Hatteras Island, my first visit since Hurricane Irene caused horrific damage to the northern tri-villages of Rodanthe (Yes, from the movie, and the pronunciation is Ro-danth-ee), Waves and Salvo. But my mind isn’t on my upcoming visit to the island. It’s on a woman I met at the conference who relied on a wheelchair to get from hotel to school and from class to class.

“Poor pitiful me” didn’t cut it. After one class that I attended with her, I couldn’t decide which class to take during the next period. I rounded the building, decided on a class and found myself returning to the classroom that I had just left. When I saw the woman still sitting there, I had to admit to her that I’d gone round in circles only to find myself back where I started, like a dog chasing its tail. She laughed at me with good reason.

As I approach the island from the Stumpy Point ferry, I wonder what I’ll find. After the hurricane, I knew the islanders went to work trying to clean up the mess. The government sent in engineers and a contractor to build a bridge going over the inlet that the storm created between Rodanthe and Pea Island (now a true island once more). It will be another month before the bridge is completed and, until then, all service and supply trucks go on the ferries to get to the island.

In the last two weeks though, Mother Nature has been unrelenting in bringing misery to the natives. Up and down the East Coast, rain has caused floods, and as the ferry dumps me into the tri-village area, I see that nearly a month later little has changed since the storm. Many residents have stored their possessions beneath tents trying to protect them. Others have dumped their destroyed belongings at the side of the road. I have no idea if the county has already picked up numerous loads and these are just the remainders, or if getting trucks onto the island via the ferries is too much work. 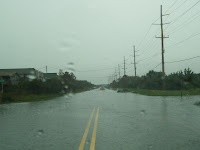 I’m lucky my truck is high and has four-wheel drive because I see that the road in front of me is flooded. The lines on the road disappear as the depth of the water rises. When I leave the town going south, the police are blocking incoming traffic due to the flooding. No volunteers to help the residents will get there today. The downpour prevents progress. 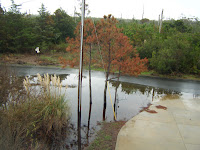 When I arrive at my house, I’m thankful that it incurred no damage, other than yard debris, but I had not anticipated the mosquito factory along my house. For the next two days, I battle mosquitoes, as do the residents. My neighbor tells me that swarms attack children waiting at the school bus stop. Another resident tells me that Dare County may bring in vaccines to help the population fight diseases the insects create. FEMA now pays for trucks spraying insecticide, and the islands have already been dive-bombed with insecticide released from planes. The New York Times article I read that day says FEMA funds will be gone in two days with thousands left homeless.

Everyone I meet acknowledges the storm damage and knows the loss. But this isn’t new. These natives have seen hardship before, have lived through storms and they have survived to laugh. I think about my classmate in the wheelchair. All are survivors. It’s a lesson I have yet to learn and eventually it will hunt me down. I don’t look forward to that lesson.

The night before I leave the sky changes. It looks like hope to me. 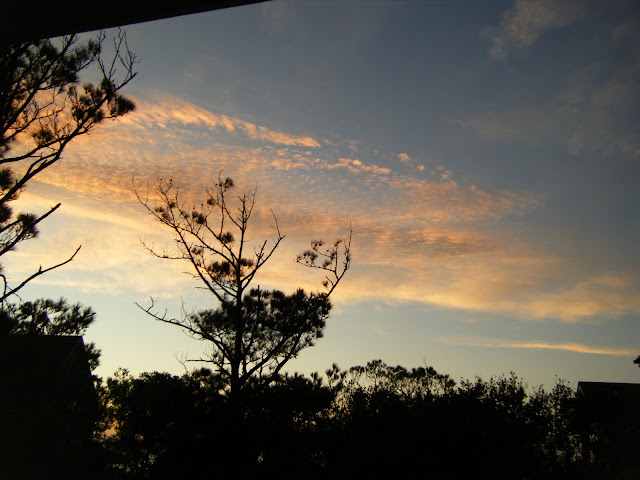 For more information go to facebook: Hatteras Island vs. Hurricane Irene, August 2011.
Posted by E. B. Davis at 12:23 AM

It puts things in perspective, doesn't it?

Yes, but I'd rather our struggles come from nature than from mankind. It seems kinder.

For those of you who connect through Networked Blogs--they must have a problem this morning--quite vexing!

Stories with nature as the villain used to be more popular before people reached most of America. I guess nature is not so much a villain as something that does what it does. I think you're right, Elaine, surviving what nature brings is somehow less devastating than surviving bombs and human hate.

What a beautiful post, E.B. Full of life's lessons. I love that your experience made you think, and I really love your last lines.

The night before I leave the sky changes. It looks like hope to me.

Yes, Pauline. I read one of those new age healer type of books probably 15 years ago. I got one truth from it. Reality just is--and you can't attach what should be or what might have been to it. Nature has no sentiment or morality.

Thanks, Donnell. There is something about the sky in the Outer Banks that is a bit holy. I suspect that the shouls so close the the surface of the water reflect light from underneath as well as from the surface. It all surrounds the island (when the sun is actually out) in this ethereal glow that makes you look up.