Recently, I was looking through two newspapers from 1950 and 1951 that a family member had saved from her hometown of Marissa, Illinois. It was fascinating to see the price of groceries (carrots were 10 cents a bunch) and read the headlines from the Marissa Messenger such as, “City to Vote on Daylight Savings Time.”

But what really caught my attention were two sections: Social News and Around Town. Social News listed parties, meetings and weddings along with the names of all attendees. Around Town was about the life of residents who lived in the Marissa area. There were pages devoted to personal detailed news like the following:

“Mrs. Mildred Dickey visited three days at the home of her daughter, Mrs. C. Wisely, and husband of Oakdale.”

“James Downen was able to get around on crutches Friday.”

I was gobsmacked when I realized how similar these blurbs were to Facebook Status Updates and Twitter Tweets. I could clearly see them as a prototype of today’s social networking. Of course, there were differences. Rude language was edited out, they used formal titles and the newspaper was local and didn’t have a worldwide reach.

Also, the social news was public so anyone could view it; there wasn’t a “just friends” or “custom” setting. I could only imagine what happened when a person saw that she was publicly excluded from a party. Also, what if Mrs. X didn’t want Mrs. Y to know that she had Mrs. W over for tea? I could see this social pressure leading to hard feelings or gasp, murder. 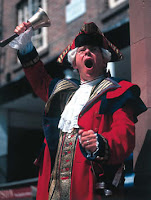 After reading this small town newspaper I thought I understood the genesis of social networking. That is, until I heard about open auditions for town crier taking place in the city of Alexandria, Virginia not far from where I live. In the 18th and 19th centuries town criers were used to orally communicate news to the community. The modern town crier makes opening remarks, proclamations and sometimes serves as Master of Ceremony at events. Contestant, Mike Cherlow, who said he would like to bring the town crier into the social-media age, referenced the number of characters limited in a Tweet. He declared, “My characters shall not top 140, for a cry is history’s first tweet.” So the town crier must be the first vehicle for social networking.

But not so fast. After further research, I realized that Paleolithic cave paintings had functioned as pictorial message boards, recording stories and communicating ideas a 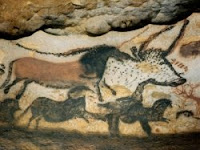 mong various tribes who journeyed far from home while hunting. Some of the oldest and most famous cave paintings, estimated to be about 17,000 years old, can be found in the Lascaux Caves of Southwestern France. These paintings were comprised of animals, figures and abstract signs. Many anthropologists and art historians believe they were a record of personal hunting success and used to communicate hunting strategies. Perhaps this truly was the first social networking site!

The biggest difference between sharing personal experiences today versus the past is the timing of the message received. In a recent Washington Post article a reporter wrote how news travels so fast now that it can arrive before the experience. When a rare earthquake hit Virginia in August of this year, people in New York reported seeing tweets about the earthquake about 30 seconds before they felt the reverberations.

It appears that social networking isn’t a new idea but over time its form has evolved and been re-imagined for each generation using available tools and knowledge. It will always be around, in some form, in order for us to make connections and share stories of important moments (and sometimes unimportant moments) in our lives. How do you feel about social networking?
Posted by Kara Cerise at 12:05 AM

Gossip, as in sharing information between friends can be a positive thing. Everyone with relationships does it.

You make a good point, Warren, that gossip can be positive sharing and a way of relating to friends. When I see the word "gossip" I usually think of the outcome as being hurtful.

I'm thinking of drums. Wasn't that the tribal method of transmitting information, or maybe it was sending smoke signals. They probably were an ineffective means, but the major point like "We're going to war, or the herd's here" carried to their neighbors.

And maybe that's the problem for me. Too much trivia. I don't need to know the minutia of so many peoples' lives.

Thanks for the history lesson, Kara.

Drumming as social networking is a clever idea, E.B. Perhaps it was the first long distance communication and presumably less expensive than today's cell phone and texting rates:)

Looks as though humans always needed to communicate with other humans. I don't know how realistic this is but I remember relatives talking about old cowboy movies where Indians sent smoke signals. Is there a connection with these smoke signals and the term smoking mirrors?

I found an interesting answer to your question about the term "smoke and mirrors" on dictionary.com, Pauline.

"The phrase has been said to derive from carnie slang for magic acts and 'freak show' displays that depend on 'trompe l'oeil' effects, but also calls to mind the fierce Aztec god Tezcatlipoca (lit. "Smoking Mirror") for whom the hearts of huge numbers of human sacrificial victims were regularly cut out."

Thanks for the update, Kara. I had no idea there was an Aztec god called Smoking Mirror. It seems a strange image for such a ferocious god.