I could often have been called a workaholic. Work always enriched my life. Therefore, I can certainly understand writing coaches who urge, “Put ass to chair and write every day even if it looks like garbage.”

Writers have favorite pens. Some create on computers. Others must write in longhand first. I’ve known writers who go on retreats to work among monks with vows of silence. There are writers who need deadlines and other writers who never meet these deadlines.

Do any of these approaches make sitting down every day to write easier? Maybe if you have the true Puritan ethic as it existed when Puritanism first came into being. Suffering and self-denial used to be very good things. When caught up in a story and the characters a writer might rush to sit down every day but the magic doesn’t last forever.

I found a burst of creativity and willingness to write every day after I moved my computer because I thought the wall connection might be causing my internet connection to fail. I was wrong but I received secondary gains. Writing came more easily in the new spot. I was further inspired after I stopped trying to understand characters I’d been working on and decided they were at best crazy and at worst in a state of arrested development. I latched onto characters I like.

On the wall, close to my computer’s new position is the first picture I bought in America. It’s a tiger that fills the canvas. When I bought it, the tiger was bright orange and yellow and carved out of the background with bold black strokes. I wanted the tiger for its free 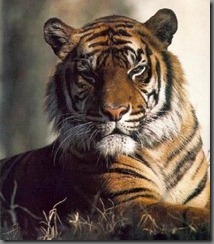 The colors have faded. The tiger blends more naturally into the sandy background. The orange has a pink tinge like flushed skin. The animal isn’t mellow or friendly. It sits, enormous front paws at rest, looking out and inward at the same time.

How can a canvas change so much? I must see what I want to see, you might say. I know about Rorschach and all the strange images and pornography that can be seen in innocent ink-blots. But it’s not just my eyes that alter the picture’s mood. The canvas has absorbed more of the colors that have been bleached by sunshine. I think the change is good like the new position of my computer.

Do you have strategies to jump start the creative juices?

My muse has a way of turning on when I'm trying to turn my mind off and go to sleep.

I'm a workaholic too, Pauline. Problem is, I work at everything, around the house, on the blog, interviewing, writing shorts and my WIP. My fractured time is frustrating. Sitting down to write is a problem, but not half the problem of thinking time.

The discussion of pantsers vs. plotters seems silly to me because I employ both methods. After I plot, when I put word to the page, then, within my plotted framework, I become the pantser.

It's having time, time alone without competing tasks that defeats me.

I think being in the dark and when it's quieter turns up the imagination, Warren. My own inner critic wakes me up in the middle of the night sometimes.

There's always something is such a true statement in my life, Elaine. And I guess I should be grateful for that because, when the statement is no longer true, it won't be finding time to write that preoccupies my mind.