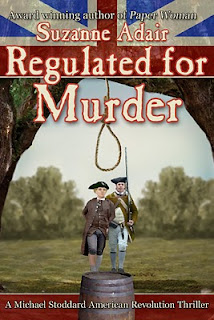 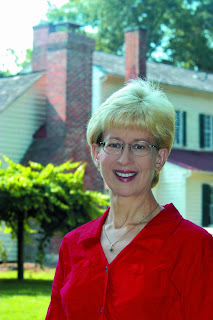 Suzanne Adair has shared a fascinating blog on researching historical mysteries with the readers of WWK before. She is the winner of the Patrick D. Smith Literature Award and author of the exciting novels, Paper Woman and The Blacksmith’s Daughter plus a third novel Camp Follower, which was nominated for both the Daphne du Maurier Award and the Sir Walter Raleigh Award. Regulated for Murder follows those works with an equally memorable story that grabs the reader immediately and provides a thrill ride like galloping on a horse through an unknown darkening countryside to escape pursuing marauders. The tension builds throughout as Redcoat Lieutenant, Michael Stoddard uses his fists, weapons, and wits in equal measure. In especially dire straights he is saved by his would-be love interest, the lovely and wise widow Kate Duncan. Stoddard survives to pursue justice in an unjust world.

Thanks, Warren I’m glad you invited me.

Second why don’t you tell us a little about your newest novel?

For ten years, an execution hid murder. Then Michael Stoddard came to town.

Bearing a dispatch from his commander in coastal Wilmington, North Carolina, redcoat Lieutenant Michael Stoddard arrives in Hillsborough in February 1781 in civilian garb. He expects to hand a letter to a courier working for Lord Cornwallis, then ride back to Wilmington the next day. Instead, Michael is greeted by the courier's freshly murdered corpse, a chilling trail of clues leading back to an execution ten years earlier, and a sheriff with a fondness for framing innocents—and plans to deliver Michael up to his nemesis, a psychopathic British officer.

Regulated for Murder is the first title in the Michael Stoddard American Revolution series, a spin-off of my trilogy (Paper Woman, The Blacksmith's Daughter, and Camp Follower). It takes place during an event we never read about in American History texts: the Crown forces occupation of Wilmington, North Carolina, in the year 1781. Possibly we don't hear about this occupation because during much of 1781, the 82nd Regiment commanded by Major James Henry Craig deployed loyalists as an efficient fighting machine while stymieing movement of the Continental Army in North Carolina. The February 1781 murder investigation in Regulated for Murder is anchored in murderous deeds from 1771, which were covered up by Royal Governor Tryon's execution of six men who'd participated in the Regulator Rebellion that year. So you have a historical mystery embedded in a historical mystery.

When is it coming out?

The release date for the electronic version is Friday 14 October 2011. The print version will be released in the Spring of 2012.

I’m curious about why you chose a Redcoat for a hero.

I noticed you refer to a padlock, which did exist at the time. What other devices or inventions existed then that readers might think of as modern?

What amazes me about the American Revolution is how modern much of it seems. Here are a few examples of "modern" technology from that time.

When officers in the army and navy bought a commission, from whom did they buy it? Did the king get his cut of the money? I’ve always wanted to know.

In the 1600s, it was illegal for an officer to purchase a commission. But by the time of King George I, the practice happened so often that regulations were put into place to curb the abuses. (If you can't beat 'em, join 'em.) Tariffs were placed on commissions. The Crown had to approve each transaction. Children could no longer be commissioned. If an officer were in the market to sell his commission, he was supposed to offer it to an officer in the rank just below his. And the government did participate in the purchase and sale of commissions.

In Redcoat: the British Soldier in the Age of Horse and Musket, Richard Holmes says, "About two-thirds of the commissions in the period 1660–1871 were obtained by purchase, the remainder being gained by seniority, through patronage or as a reward for long, gallant or distinguished service...In wartime the demand for officers outstripped the supply of would-be officers who could afford commissions, and in the large army of 1810 as many as four-fifths of all commissions had been obtained by means other than purchase...Non-purchase vacancies occurred when an officer died or was cashiered, or in wartime when new units were raised or existing ones augmented, although the commissions thus granted could not generally be sold."

That business adage applies here: "You can get it fast, or you can get it cheap, but you cannot get it both fast and cheap." The fast track, as you'd expect, was purchase, but only the very wealthy could afford multiple purchases. Thus Michael Stoddard, a commoner, appears stuck at the rank of lieutenant in Regulated for Murder, as his benefactors' pockets have run dry. But the landscape of war changes rapidly, as Michael will learn in the next book of the series.

Is there some question about your writing that you have never been asked, but would like to answer?

Yes, my characters often pursue actions that surprise me, and yes, I've had creepy dreams about Lieutenant Fairfax.

Finally, please promise you will come back in the future and tell us more?

I'd be delighted. Thank you for having me.

When I studied history at school, I was told to read around the subject, to read historical fiction. Purists will argue about fact vs fiction but my reading helped me picture historical figures and periods so I have a lifelong interest in the way we were. So often I hear students say history is boring and they can't wait to stop reading their textbooks. I can understand that. Textbooks can be so black and white with good guys and bad guys.

Historical fiction taught me more than school ever did. Good interview, Warren. Thanks Suzanne for being our guest.

Thanks, Pauline! Wow, you had some progressive teachers. While historical fiction isn't always factually correct, the advantage it has over rote memorization of dates and names is that it instills enthusiasm in the reader. The reader may then be inspired enough to conduct personal research. That's how history comes alive, and the black and white vanishes.

E.B., I share your sentiment! Thanks for the opportunity to be a guest here again.

Suzanne is a wonderful writer and person. Great interview, you guys. Congrats!

Thanks to my reader, Liz Veronis, for pointing out that Thomas Jefferson didn't invent the device that copied his letters, but he did put it through QA and correspond with the inventor with suggestions for improvement. Read what the Monticello web site says about it. Jefferson's office sounds modern,doesn't it?

Hi again, Suzanne! What's amazing to *me* is how much richness you historical writers can mine from these dramatic times...