I’ve never had a great memory, but for some reason I can recall the street addresses of every house in which I’ve lived. Some of those homes and addresses have stuck around in my subconscious, and others have ended up in my mysteries. But all have been in small towns in downstate Illinois. 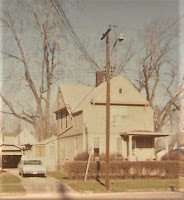 People move more these days than they did when I was growing up—into different houses, across the country, over oceans. But in the 1950s, my family had their first house in the town of Galesburg, Illinois. 692 North Kellogg Street. We stayed in that house until I was in college. It no longer exists because it was razed in the mid-1960s to build a hospital parking lot. But in my mind, I can still see every nook and cranny, every pattern on the wallpaper, the living room drapes, the layout of the rooms, the office my dad added on for his tax business, and the backyard where I used to play with neighborhood friends. I can even visualize the cherry tree in that back yard, although none of this exists anymore. It’s only in my mind.

When my husband and I bought our first house in Monmouth, Illinois—215 West Broadway—I  knew—a gut feeling—when I walked through the rooms that this was the home for me. It wasn’t until much later that I realized the layout of the rooms was exactly like the house where I grew up at 692 North Kellogg. Subconsciously, the familiarity and comfort of that pattern led to our decision to buy. 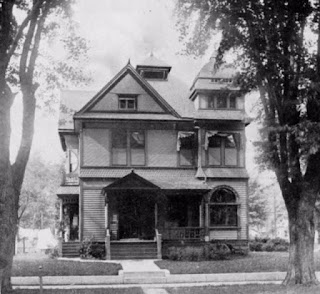 Before we bought that home, we lived in an apartment in a huge Victorian that has been a major setting in both my Endurance mysteries and my Sweet Iron mysteries. (The photo above shows an entrance on the left side that was gone by the time we lived there.) 402 West Broadway. It was built in the late 1800s by Charles Barnes and became known as the Allen house since John C. Allen was the longest resident. He was a self-made millionaire who owned a huge department store in downtown Monmouth with so many doors it had five different addresses. His business drew customers from as far away as Chicago and St. Louis.
I’ve investigated the history and owners of that house at 402. One scene in my Endurance mysteries came right out of real life. At the County Clerk’s office I asked for the late 1800s plat book for that property so I could see the history of the land, the owners, and the house. The clerk brought it down from some nondescript dark recess “upstairs” and dropped it on the counter as a huge plume of dust flew in every direction. Both the home that Jeff Maitlin bought in Marry in Haste and Tippitt House in A Death at Tippitt Pond are based on this amazing Victorian house. The attic on the top floor was actually a ballroom, and a magnificent mahogany staircase rose to the ballroom in the front of the house. A servant’s entrance and stairway were near the back of the house just off the kitchen. (The photograph below was from a postcard picture of the house.) 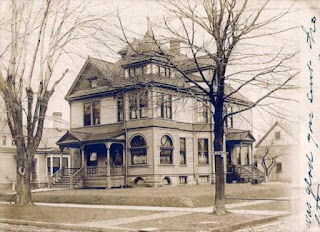 When we lived there in the late 1960s, our apartment took up the entire first floor. To give you an idea of size, ten feet longer north to south and it would have been the length of a bowling alley lane. It had gorgeous wooden pocket doors that opened into the front foyer, an entrance with stained glass windows where people probably left calling cards in the 19th century. Black gas fixtures were still in the walls from the date when they changed from candles to gas lighting. Four other apartments were above us on the second and third floors. Imagine a family with six children, like the Allens, living in this vast house built as a family home. Although it didn’t have a carriage house on the north side, I added one to my book just for fun.

Alas, 402 went the way of many huge homes that eventually became money pits. It was razed in 1990, and only the cement steps from the street to the sidewalk remain. But during the time we lived there, I thought about the details and the many changes that had taken place between the 1890s and 1972. 402 was quite the Victorian lady, a trifle dowdy in her old age, and, sadly, living way beyond her prime.
Posted by Susan at 3:00 AM

My house in Cincinnati (that I shared with Seamus McCree, the protagonist of the series I write) was a Victorian built circa 1890. I loved that house, although it was a tad expensive to heat. It had pocket doors as well and a wonderful staircase with jhand-carved banisters.

I've never lived in an old house. They seem creepy to me, though I appreciate the architecture and finish details--craft that few know how to create these days. The one old house I stayed in for a while when my to-be husband rented it was haunted by a woman we finally found out had committed suicide. She was hostile in the beginning to the point of wanting me out of the house if my intended wasn't there. After he proposed to me in the house and he was in the process of moving out, we sensed a regret on her part. But her son said she was crazy. We believed him. He didn't doubt she haunted the house.

Not only do I remember every address I've lived at, I remember the postal (zip) code and the phone number we had at that address! I've always admired Victorian architecture and write about it in my books, but I've always lived in bungalows and modern 2-stories or high rise apartments. I do love nostalgia though and you've captured that.

I love old houses, but the maintenance and heating/cooling bills don't make them practical. When we owned our first house, a 1964 aluminum-sided tract colonial, we tackled everything from roof to new furnace in the basement. We learned our capabilities (stripping wallpaper and linoleum) and limitations (the day the concrete front porch caved in because it wasn't backfilled).

Good times, glad they're over.

Susan,
When I pass an old house like the ones you describe, I often find myself imagining the people who once lived in it.

My favorite old house was my great grandmother's. She had married when she was 17, to a man who was 72 at the time. He had the house built for her. It was a massive Victorian, with six bedrooms, a butler's pantry, a front and back stairs, and unending decorative touches. They had five children, and, not surprisingly, he died before they were grown. She lived in that house until she was 104. I remember sitting on the horsehair chairs in the parlor, being admonished to sit still. I would have been wearing a "Sunday dress" which rode up as I sat, leaving the bare backs of my thighs to deal with the itchy horsehair. The house is still standing.

It makes me so sad when these dowager empresses are razed. I feel as if the hearts and voices of all the people who occupied and loved them are screaming out their individual stories. My only first hand experience with an old house was renting an apartment in an 1890s house. By the time we got to it, the place had been through numerous renovations but the sleeping porch and the maids' quarters upstairs under the attic eves survived. We kept our bedroom dressers on the sleeping porch and had to push them back to the wall once a month or they would collide with the sitting area we also fashioned out there. I'm not sure if the building is still standing.

I remember my first two addresses, but after that, it's a blank until the first house I owned. I admire people who have number memory, unfortunately, I have none.

Yes, Jim. That sounds a lot like this house. And I believe it was built around the 1890 date too. The man who built it signed up for the Army of the Potomac when he was just 15. He ended up with a scar on his chin that he carried the rest of his life. Like you, I loved the intricate carvings and the care in the details of the house.

That is an amazing story, Elaine. And it didn't worry you to be in that house? One of my friends owns a Victorian he has lovingly restored, and he is quite sure it has ghosts.

Thank you, Judy. Of course, I didn't mention the furnace always going off or the upstairs resident who ran the water over in her bathtub so it came through our kitchen ceiling. Ah, the joys of living with apartments. But despite the nostalgia, I understand how much money is needed to keep one of these up. I am so impressed that you can remember zip codes and phone numbers. Wow.

I also imagine those early inhabitants, Marilyn. Of course in my case I have tracked them down from the 1890s until 1990. At one of my book talks, the woman who had bought that house long after we lived there was in the audience. She told me with great sadness how she had had to raze the house. It was just too expensive. But it was so easy to imagine the carriages pulling up to the front of the house with women in ballgowns that often came from Paris. It wasn't hard to imagine living there.

What a wonderful history, Kathleen. Thank you for sharing it. Wow. Talk about an age difference in a marriage!

That sounds very typical, Kait. This house was broken into apartments in the 1950s after WWII. A lawyer who bought it lived in the downstairs and had renters above him. When I lived in it I was just 22, and I didn't appreciate all its history until I was older and had some time to look it up. Beautiful, nostalgic places but lots of money to maintain.

Lovely post, Susan. Having grown up in a Victorian house, not quite the size pictured, I am heartbroken to see them being torn down. Each time I visit my hometown in Pennsylvania, more and more of them are gone.

The house I grew up in, in Moline IL, was built in the 1890s, but wasn't grand at all. No towers or wrap around porch, or pocket doors. Bathrooms were added after it was built, but, thankfully (!), before we lived there. I do love old houses. I don't think I'd be comfortable living in a new house. When we bought this one in Knoxville TN, the real estate agent said she thought it looked dated. I told her *I* am dated.

I know, Grace. We still have quite a few, as does my hometown twelve miles away. Fortunately, several are owned by people who have the interest and budget to save them.

Kaye, thanks for giving me a laugh. It is a gift you have.