The Cemetery of Lost Words by Connie Berry 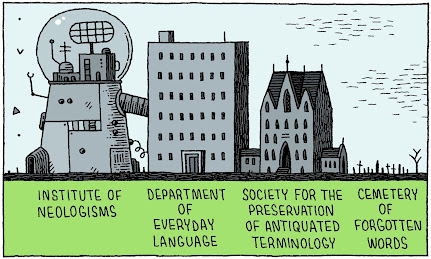 My favorite line in J. M. Barrie’s Peter Pan describes Captain Hook: “The man is not wholly evil—he has a thesaurus in his cabin.”

I love that. Words are important. They convey meaning and create an intellectual and emotional response. Since we know words can hurt or heal, we should be certain ours are understood.

Some words are imprecise, flabby, and liable to misinterpretation. Other words nail the intended thought with such clarity and precision that the mind of the hearer or reader is enlightened and enlarged. I admire people—even Captain Hooks—who know interesting and beautiful words and use them with skill and artistry. That’s the job of the writer, after all.

The English language has no shortage of words. One million is the current estimate, with more added each year. In 2019, the Merriam-Webster Dictionary added almost 700 new words, phrases, and definitions, including buzzy (speculative or excited talk or attention); snowflake (someone who is overly sensitive); and unplug (temporarily refrain from using electronic devices).

My interest isn’t so much in the new words being created as in the old words being lost through neglect—or downgraded in meaning. I agree with those who say, “Don’t use a fancy word when a plain one will do.” The problem is sometimes a plain word just won’t do.

With that in mind, I’ve compiled a list of eight delightful forgotten or endangered words I think we should use more often so as to preserve them for future generations.

1. Eventide: the onset of dusk or twilight; a lovely word to use when all is right with the world, and it’s time to sit on the porch with your sweetie and a glass of wine.

2. After-wise: the feeling of knowing exactly what you should have said or done when the opportunity to say it or do it has passed you by. Yup.

3. Susurration: the whispering, murmuring, or rustling of wind or water; a perfect example of onomatopoeia (another endangered word).

4. Bunbury: to get out of a commitment by inventing an imaginary person you must visit; from Oscar Wilde’s The Importance of Being Ernest, where Algernon invents a sick friend named Bunbury as an excuse to avoid his relatives. Secondary meaning: to galavant around (another word in danger of being forgotten) under a false identity. The first bunburying often leads to the second.

5. Slugabed: a person who stays in bed long after the usual or proper time to get up; helpful when raising teenagers.

6. Énoument: the bittersweetness of having arrived in the future and seeing how things turn out, but not being able to tell your past self.

7. Ephemeral: lasting for a very short time; fleeting; transitory. A word used primarily by those over fifty.

8. Chimerical: hoped-for but illusory and impossible to achieve; or something that exists only as the product of unchecked imagination, like Big Foot or world peace.

I read a fascinating article recently on the subject of lost words by Wilfrid M. McKay in The Hedgehog Review (Fall 2019). McKay said, “Like a lover of endangered species, the lover of endangered words jumps for joy when he sees a word being rescued, and is grateful when a writer restores to currency a semantic possibility that had fallen into desuetude. It is as if a lovely antique table has been rediscovered after many years of gathering dust up in the attic, and when brought downstairs and cleaned up and polished, imparts a splendor and unbought grace to the room that no shiny new object could possibly match.”

Do you have some favorite old words? How about a favorite author who makes you get out your dictionary and thesaurus? What words do you hope we save for future generations?

I'm a philistine when it comes to lost words. What good does it do to have a million plus words when the average person knows only 40,000 and doesn't know when to use less or fewer, subject or object pronouns?

With age and experience, I've found that general words combined with hand illustrations work wonders for describing things for which you can't remember the names. You know, the doohickey, that's about this big that you fit over the top of the thingamabob to open the whatchamacallit. Adding appropriate gestures and your conversant supplies church key, bottle cap, and soda bottle.

Tongue in cheek, of course. But I treasure those who can be precise without resorting to multisyllabic anachronisms so I can keep on reading without having to haul out a dictionary to figure out what they are trying to say. (Although, I am more tolerant when I read with my Kindle and holding my finger over the word magically produces its definition.)

I celebrate the old-timey words in hymns and Christmas carols.

Fortnight - I love that word, always have. Its fallen from use in US English - at least in my part of the US and I'm sorry to see it go.

I love these! Slugabed! That's what I strive to be, if only insomnia and my cat would allow!

Interesting. Actually, slugabed was frequently used by my family when I was growing up. My mother had very rigid ideas about when people should arise from their beds, no excuses accepted. Otherwise, you were a true slugabed. Even if you had worked an overnight shift and fell into bed at 6 AM. You had to get up by 8.

The last time I heard "Ephemeral" used was by a biker with an amazing vocabulary. He described the high one got off a certain drug with the term. When he was arrested and charged with murder, the interrogators who recorded his statement had to go back over it later and look up some of the words he'd used, like "importune."