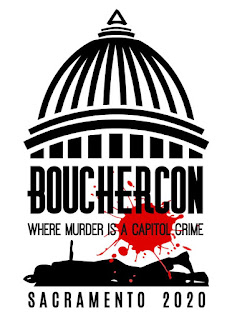 After Covid 19 changed our lives, the local organizing committee blazed new territory by converting the conference, in its 51st year, to a virtual event held this past Friday and Saturday. A new Bouchercon for a new half-century! According to Michele Drier, 33 live panels were held with audiences from about 80 to more than 260 each. Attendees used the chat line to ask questions and greet fellow participants. Pre-taped welcomes for each day and interviews with the Guests of Honor were available for viewing during the 48 hours of the conference. Also among the taped segments was an interview among past Sisters in Crime Presidents and one of Anthony Boucher’s radio programs, presented by authors. 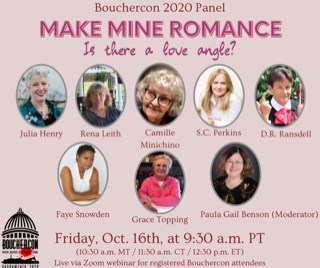 I was delighted to be asked to moderate a live panel, titled “Make Mine Romance: Is there a Love Angle?” I knew two of the panelists, Grace Topping, a blogging partner here at Writers Who Kill, and S.C. Perkins (Stephanie), who prepared graphics to publicize our segment. Both Grace and Stephanie were nominees for this year’s Agatha for Best First Novel.

While I had heard about the other panelists, this was the first time we had the chance to interact. Let me assure you they all now are on my to-be-read list, including our host June Gillam. Here’s a little about each so, if you haven’t already, you can discover their work.

D.R. Ransdell has written a memoir about her 25 years experience in a mariachi band. Her mystery series features mariachi violinist Andy Veracruz, and she has written a romance set in Thailand.

Faye Snowden has two mystery novels featuring Dr. Kendra Hamilton and one with protagonist Raven Burns, a police detective whose father was a serial killer.

Not only was it great to hear what this insightful group of authors had to say about how romantic elements (including humans, pets, professions, and obsessions) influenced their work, but also it was terrific to have this discussion take place at Bouchercon where often hardboiled and noir stories predominate the conversation.

Bouchercon 2020 concluded with the Anthony Awards ceremony held on a public access channel. The nominees appeared on screen to hear the winners announced and make acceptance speeches. At the end of the evening, as the baton was passed to Heather Graham, for 2021’s local planning committee in New Orleans, promises were made to continue virtual access and allow for more participants. I hope that will be possible. For all that we’ve had to learn during this year of isolation, the new capabilities for connections are a true asset.

Sounds like a good experience, Paula. Although I know you Southern girls can make anything sound good with your fine words and their double meanings.

Sounds like a wonderful conference! I am sorry to have missed it this year, but happy to learn there are plans for a virtual component next year. YEA!

Special shout-out to the WWKers who attended and participated on panels. I'm proud to blog with this group.

Bless your heart, Jim! We give it our best. In this case, the event was an awesome achievement. Many thanks to all those involved!

Kait, isn’t it great to have so many WWKers on panels! I was proud, too!

Thanks for the recap. Certainly makes me want to try to get to the next Bouchercon.

Thank you, Paula, for the wonderful spotlight on this year's Virtual Bouchercon. It was a lot of fun, But I missed seeing everyone in person and getting to take photos.

Paula, you are so right - WWK was a super presence! I loved seeing everyone's faces, even if we couldn't share a drink and visit in person. Fingers crossed that we can make that happen in New Orleans.

Paula, I'm so glad you blogged about Bouchercon. It was a wonderful virtual event. I was happy to take part in it. Yay for WWK's super presence!!

It was a great event, although I did miss seeing folks in person. I made it to the romance panel you moderated, Paula--so interesting.

Thanks for the shout-out to all the WWKers at Bouchercon. Looking forward to more connecting next year!

Margaret, I think it will be great to incorporate a virtual option. Many readers and authors miss the festivities if they are unable to travel.

KM, I am so ready to return to New Orleans! I hope we will be able to go there.

Grace, I missed our usual photo, too. The screen shot helps, but it's not the same as standing together and grinning!

Shari, I was so delighted to see all of us WWKers as part of the program. Maybe we need to pitch a WWK panel to the NOLA B'con committee.

Marilyn, it was a great event. So glad to be able to gather virtually, if not in person.

Jennifer, weren't the Romance panelists awesome? So many accomplishments. I learned a lot researching their careers and talking with them.

Please let me also thank Christopher Graham, who took care of all the IT issues. He was awesome!