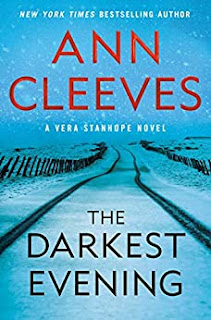 Vera Stanhope and Jimmy Perez are loners, Vera by inclination after an emotionally fraught childhood, and Jimmy Perez after his beloved fiancee Fran dies. Matthew Venn enjoys a stable marriage with his partner, Jonathan.

During her talk, Cleeves described how she created her main characters, who are neither super-heroes nor self-destructive. Vera is based on her childhood memories of the sturdy women of the fifties, teaching school or acting as the power behind the scenes in a village, single by choice or circumstance following the devastation of World War II. They are intelligent and formidable, with an iron will and disdain for the societal conventions of the roles of wife and mother. 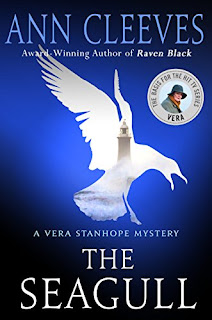 “The woman stood just inside the door and was caught in a patch of coloured light; sunshine coming through the one stained-glass window made it look as if she was standing in a pool of red water. She was big and she wore a tent-shaped dress covered in purple flowers. Her legs were bare, and on her feet were the kind of sandals that walkers and climbers might wear. He could tell just from the way she stood and stared back at them that this was the last place she wanted to be. She was impatient, and she wanted this over.” (The Seagull, p.5) 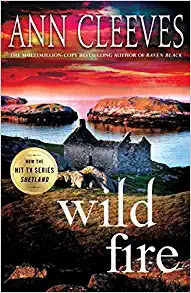 After publishing eight books about Jimmy Perez, Cleeves ended her Shetland series. The Shetland Islands are sparsely populated, and she was concerned about the credibility of so many murders in an isolated area. In this excerpt, a woman who may be friend or foe describes Jimmy Perez:

“She was reminded of Cassie Hunter, and again of the detective with the Spanish name and dark good looks, felt a moment of lust and wondered how things would be if she were single.” (Wild Fire, p.29-30) 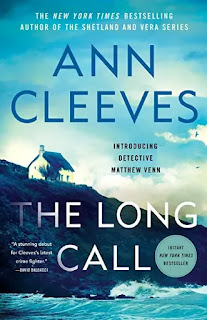 Matthew Venn is the troubled detective in Cleeves’s Two Rivers series set in North Devon. After her husband died, Cleeves stayed with a gay couple, which inspired her to have Venn not only an outcast from his strict, fundamental Christian upbringing, but married to a man. Cleeves is pleased that Matthew was so well received by her readers. He’s a sensitive soul and tenacious detective. In this excerpt, Matthew describes himself:

“He looked like a respectable man, a wearer of suits and sober ties, prematurely grey-haired and staid. Not a risk-taker or a rule-breaker. Matthew thought he could have been the celebrant, arriving a little late for the service. Or a diffident mourner, sheepish and apologetic, with his soft skin and sad eyes. A stranger seeing him for the first time would expect sympathy and comfortable words. In reality, Matthew was angry, but he’d learned long ago how to hide his emotions.” (The Long Call, p.1)

Cleeves is appreciative that the television series—Vera, Shetland, and soon, Two Rivers—capture the spirit of her books. She delights in watching the talented Alison O’Donnell, her favorite television series character, who plays “Tosh” Macintosh, the young policewoman in the Shetland series.

Though Cleeves has memorable characters who grow and change as the series progresses, like P.D. James, she starts each book with the setting, creating the circumstances of a murder and secondary characters associated with foul play, either as victims or potential perpetrators. Cleeves has lived in Vera’s Northumberland for many years, and spent her childhood in North Devon, the setting of the Matthew Venn books. Cleeves met her ornithologist husband on Fair Isle, near the Shetland Islands, and visits friends on the islands every year. Before she starts a new book, Cleeves spends time in the area immersing herself in the spoken idioms and dialects of the setting. She ably sets a scene, combining her perceptions or memories of a place with those of character in the story.

In The Seagull, the opening scene is the 1995 prologue, told from the viewpoint of a young woman:

“In the far distance, she caught the noise of the town: cheap music and alcohol-fuelled high-pitched laughter. It might be Sunday night but people were still partying, spilling out of the bars and clubs, lingering on the pavements because this was June and the weather was beautiful, sultry and still...She could see the silhouettes of the rides, marked by strings of colored bulbs, gaudy in the full sunlight, entrancing now. The full moon shone white on the Dome, on the tower of the lighthouse behind her, and on the seductive Art Deco curves of The Seagull.” (The Seagull, p.1)

In Wild Fire, a young woman sits on the beach:

“Emma sat on the shingle bank and watched the kids on the beach below build a bonfire. They’d dragged pieces of driftwood into a pile; it was something to do to relieve their boredom…The night was clear and still and the light drained slowly away. In another month it would be midsummer.” (Wild Fire, p.1)

In The Long Call, Matthew closely observes the details of the area surrounding a crime scene:

“The small industrial park, where they made surfboards and smart country clothes; the strip fields, brought back to life to feed incomers and posh grockles organic vegetables. The road narrowed; on each side a dry-stone wall, the stones laid edge on, with a hedge at the top. There were already catkins and soon there would be primroses.” (The Long Call, p.4-5)

Quite modestly, Cleeves stated that once she finds a setting and victim, she plunks her detective in the middle of it, adds a cast of secondary characters, and starts writing, with no idea who committed the crime, and why. We, the readers, accompany her on the journey to unravel present and past crimes.

Readers and writers, do you enjoy Ann Cleeves’s books and the television shows on which they’re based?

Thank you for sharing this, Margaret. What a fabulous opportunity! I fully intend to keep checking to see when the event goes public. I began The Long Call last night. It is wonderful in so many ways and the reading will be so much richer based on your post.

Excellent post, Margaret. I had the privilege of seeing Ann Cleeves and Brenda Blythen at Malice Domestic two or three years ago. Both were such gracious women. I recently started watching Vera on PBS and enjoyed the episodes I saw.

I've read the Shetland Island series. She takes chances with her secondary characters that other authors wouldn't. It took my breath away--and it was very dark. She's a writer who captivates audiences. Glad to see her success as a writer and having her books televised.

Ann Cleeves' books are always rich with full-developed, believable characters. Looking forward to reading this one!

Kait, after creating Vera Stanhope and Jimmy Perez, how could Cleeves create another memorable main character? With Matthew Venn, she did!

Grace, the TV shows enhance my experience of Cleeves's books, though Brenda Blythen is in a class by herself. I want a green rainhat like Vera!

Kathleen, the more we know about Vera Stanhope, the more we want to know. I'm looking forward to her new book, too.

I so enjoyed this post, Margaret! I still remember how captivated I was by the first book of hers I read, RAVEN BLACK. So good! Thank you for sharing all of this with us. I want one of Vera's hats, too!

Shari, all three of her main characters resonate for different reasons, but Vera's green rainhat wins the lottery.