Recently, someone on Twitter posted the question: “First person or third person, Which is better?” I scrolled past because 1) the question was utterly unanswerable in 280 characters or less, and 2) it was badly posed. It’s not the first time I’ve seen that question pop up on social media, but it was the first time I felt driven to work out why it’s the wrong question.

Because the short answer, “it depends,” while true, isn’t particularly helpful. And supplying an answer depends upon understanding wildly different needs.

For most of my writing life, I’ve written in the first person. Early on, it felt like an aesthetic choice, one that I believed delivered a more immediate, character-driven story. Which it certainly can do. I looked back recently at each of the stories I’d published as a young man, and all were in first person. In fact—in an attempt to increase the immediacy between reader and action—I’d written just about all of them in present tense. (It was the ‘eighties, and I had written them under the spell of Amy Hempel and her very fine short story collection Reasons to Live, most of which are told in the present.)

The present tense aspect, in retrospect, strikes me as maybe something of a conjuror’s trick. But Hempel’s use of narrative voice—for very different characters—was arresting, compelling and urgent. She inhabited those narrators. More recently, Art Taylor’s writing in On the Road with Del & Louise and his recent The Boy Detective (also first person) does much the same thing, a sort of Stanislavsky/An Actor Prepares approach that’s rich and inspiring. I tried to inhabit the character as an actor would in my own writing, with varying degrees of success. But the danger in writing in the first person is that the narrator may actually be (or become) you, the writer, and the story risks becoming neither memoir nor fiction. (This is distressingly, abundantly true of my first, unpublished novel, written back then.)

If there’d been Twitter in the 1980’s, I’d have probably enthusiastically responded that first person was best.

But as this century dawned and I turned to write my first thriller, Faithless Elector, I wrestled with how to tell it. The story, as it took shape in my mind, had scope, multiple actors and multiple locations. No single character could know it all, unless the story was told in retrospect and the narrator has been able to fill in the gaps. Which removes the immediacy I craved and the suspense I needed. How, after all (unless I’m prepared to go full Sunset Boulevard), can there be any suspense about the danger to the protagonist if she’s recounting the story in safety and comfort—having obviously survived?

As I sketched out the story of Faithless Elector, I felt that it had a cinematic quality, perhaps even seen through a camera lens. In film, I’ve heard it said, the camera is the narrator—decidedly third person. But two of my favorite movies are the classic Western, Shane, and the WWII film Das Boot, which seem to be first person tales. Shane is told from the perspective of little Joey Starrett. It begins when he and Shane meet, and it’s Joey who follows him at the end as he rides into the sunset. He has seen it all. In the original novel, it’s Joey (named Bob in the novel) who tells the story. Das Boot begins when a reporter comes on board. And he’s seemingly the only one left alive at the end. Presumably to tell the tale. And, of course, there’s William Holden’s Joe Gillis in Sunset Boulevard.

Of the thriller writers I had long admired, LeCarre, Greene and Forsyth, only Greene seems to have written in first person. In his best, The Quiet American, he did so in order to use an unreliable narrator, the better to draw the reader in.

Prior misconceptions aside, the point is that the deep dive into character that first person demands —like the specificity of an actor preparing for a role—can also inform the characterizations of a third person narrative, but for multiple characters, enriching the story. Which is always what the story wants.

And I’ll probably save present tense for scripts and screenplays...of which I have a few.

Bio. James McCrone is the author of the Imogen Trager thriller series, comprising Faithless Elector (2016), Dark Network (2017), and the forthcoming Emergency Powers (Oct. 1, 2020) — “taut” and “gripping” political thrillers about a stolen presidency. His work also appears in the short-story, edited volume Low Down Dirty Vote, vol.2.
A Pacific Northwest native, he now makes his home in South Philadelphia with his wife and three children.  James is a member of the Sisters in Crime network, Mystery Writers of America, International Association of Crime writers, and Philadelphia Dramatists Center. He has an MFA from the University of Washington, in Seattle. 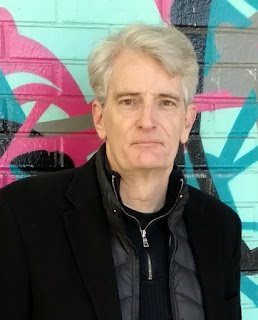