Monk Was Right by Keenan Powell 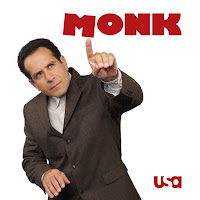 After a day of running errands in a mask and liberally dosing with hand sanitizer every time I return to the car (kept in my purse and not the glove compartment), I’m ready for something light, and Monk fits the bill.

I’ve always related to Monk. I must confess that I’m a bit of a germaphobe. I don’t like touching anything metal in public. Do you have any idea how long germs can live on metal? I quit going to the gym because of it; I kept getting sick. I don’t think other people wash their hands as often (or as long) as I do, and I notice. There was a woman in my office building who never washed her hands when she used the restroom. I saw it! There I was, trapped in the ladies room after she turned the doorknob to leave. I started using paper towels to open the door after that. I was thrilled when they moved out. But I digress.

I like the traditional mystery plots in Monk’s two seasons and was tickled with the nods to Agatha Christie dotted through Season One: a story involving a will, a visual reference to the train scene from "4:50 From Paddington," a plot involving a murder in an airplane. Then in the second season, there were two locked room mysteries. One with a solution I’d never seen before and gave me a delightful surprise. And another, a more typical solution in which a chimp is the prime suspect. Get it? A chimp. Anyone remember "Murder on the Rue Morgue?"

I like the quirky characters: Monk, the OCD germaphobe version of Sherlock Holmes, his nurse, Sharona, the big-hearted brassy little woman, Capt. Stottlemeyer, who simultaneously is vexed by and protective of Monk, and Lt. Randy Disher, the human Google. There’s probably a better term for the detective’s sidekick than the “human Google” but that’s what I’ve come to think of him: there has to be someone who walks into the room with a tidbit of information. And every week there is a new quirky character for that week’s story: a fortune teller, an elephant trainer, Monk’s agoraphobic brother, a tree sitter, Stottlemeyer’s hippy filmmaker wife, on and on.

To be completely honest, I quit watching the show back in the day when Sharona left. I never warmed to Natalie. I’m working my way up to the last Sharona episode right now. After that I might skip ahead and see if I like Natalie any better. The show won a bunch of awards so it must have still been good.

I like the comedy bits. There is one written into almost every show, some funnier than others. One of my favorites is a scene where Monk and Sharona are interviewing a bartender. Sitting next to Monk is a guy drinking a Corona (no kidding) who is making a day of it. The guy orders a water which the bartender pours from a bottle. When the bottle is returned to the backbar, the water bottle level is now lower than that of the Scotch bottle next to it. So Monk orders a Scotch to even the levels. But he doesn’t drink, so he gives the Scotch to the beer guy. Beer guy downs it and orders another water. Water level goes down. Monk orders another Scotch, gives it to the now-getting-drunk beer guy. Then the beer guy figures out what’s going on and orders a double water.

Ironically, there are some continuity mistakes that make me nuts. Ironic that there are continuity issues since it’s a story about a man with OCD. Not ironic it makes me nuts. My kids used to groan every time I leapt off the couch pointing at the TV, yelling about how the pen moves from one hand to another or some such. For instance, there is a fair scene in which Monk is walking through the midway, and a fat man in a yellow sleeveless t-shirt with aFu Manchu mustache,  a watch, a ring, and a fanny bag is sometimes behind him, sometimes gone. I only noticed because the fat man owes me money in real life. Really.

And, hey, did anyone else notice that Trudy’s grave was in three different graveyards by the end of Season Two? Or is just me? I could be wrong. But I don’t think so.

I never watched Monk but my house could use some obsessive attention to detail, like all the half-jars of marinara sauce in the fridge.

A new possibility for my husband's TV evenings. I'll have look for it.

Margaret S: Ha! The titles open with Monk standing on a stepstool and vacuuming his walls. Every time, I look up at my walls and think "How can dust bunnies just hang there? I should really do that." And then I forget.

KM: Hope he enjoys it!

I liked Natalie OK, but it took me some time to get used to her. That was such a clever premise for a main character! Loved that show.

Kaye, I'm still not getting used to Natalie. Maybe in the later seasons, where they aren't putting so much energy into distinguishing her from Sharona.

Paula: it's fun. Hope you enjoy it.

I love Monk. I have the entire set on DVD. I ended up liking Natalie much better than Sharona. Sharona does a couple of guest spots later in the series which surprised me because she left in a contract dispute.

I like how Randy developed into such a goofball. He always had some idiotic idea. It was hysterical.

I also liked the closure of the series. They didn't leave anything hanging.

Have you seen the recent YouTube video "Monk in Quarantine?" It's perfect.

Joyce: I have not seen the You Tube! I will look for it. Thanks!