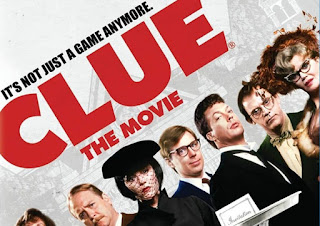 The pandemic has changed many aspects of our lives. It’s certainly changed my tv and movie streaming habits. I’ve never really binged movies or tv shows before. But now I’m binging with the best of them, and am currently on season four of Brooklyn 9-9. Yes, I’m looking for laughs. Back in March, I made a list of Oscar winners and other serious films that I intended to watch during lockdown. Have I watched Parasite or Once Upon a Time in Hollywood? Nope. Am I catching up with Agatha Raisin and What We Do In the Shadows? You bet.


After working through as many free options on Netflix as possible, my daughter mentioned that there was a movie version of the Clue board game. How did I not know this? One of my favorite games was made into a movie? With a cast starring one of my favorite actresses, the magnificent Madeline Kahn? In Clue the Movie, Kahn plays Mrs. White, a mysterious widow – not the cook/housekeeper of the original game.* On a dark and stormy night, she and some other suspicious characters are invited to a dinner party at the mansion of Mr. Boddy (Lee Ving). Boddy's butler, Wadsworth (Tim Curry), assigns each guest a colorful name: Mr. Green (Michael McKean), Col. Mustard (Martin Mull), Mrs. Peacock (Eileen Brennan), Professor Plum (Christopher Lloyd), and Miss Scarlet (Lesley Ann Warren).


Before viewing, I checked reviews. The critics were not kind, with most concluding that the game was more fun than the movie. Rotten Tomatoes said: “A robust ensemble of game actors elevate Clue above its schematic source material, but this farce’s reliance on novelty over organic wit makes its entertainment value a roll of the dice.” Translation? The “plot” doesn’t make sense, the jokes are of the boob, dog poo, and rimshot variety, and it could have been funnier. What does make the film fun? The stellar cast flinging dignity out the window and giving the less-than-stellar material the old college try, plus three different endings.


Why three endings? Different versions of the ending ensured movie audiences wouldn’t be able to give away the solution to the murder. (The streaming version has all three endings.) Though the solution brought to mind Raymond Chandler’s take down of Murder on the Orient Express (“only a halfwit could guess it”), I had to admire the writers.


Have you played Clue? What shows and movies have you been bingeing lately?

Clue was one of my favorite childhood games. Mrs. Peacock in the study with the candlestick - of course!

The movie is pure mind candy. I loved it when I saw it and it would be the perfect flick for a pandemic stream. If you are up for more camp (and Curry) consider the Rocky Horror Picture Show. I haven't seen it since the 1970s when it was released. Not sure if the humor holds up, but I remember it as hysterical at the time.

CLUE the movie! Perfect. Followed by GOOSEBUMPS the movie, which is zany good fun.

Hi Kait, mind candy is the perfect term. I remember the Rocky Horror movie - what a scream (sorry!) and all the midnight showings. Definitely a good one for a pandemic playlist.

Hi Margaret, Goosebumps! I haven't seen that one. Going on the list, too!

I used to love playing Clue, and I’m sure I saw the movie. Nice diversions from the present.

What fun! I'll have to look for it.

Right now, I've been watching one show each evening with my husband--Brother Cadfael (the first ones were good; the last two I've seen, not so much) Midsomer Murders and The Vicar of Dibley. Then he goes on to watch NCIS, Andy Griffith or one of the myriad documentaries on World War I or II.

Shari, a good friend of mine in Chicago lived down the block from a theater that showed Rocky Horror every night at midnight. It was fun watching all the people in costume waiting for the theater to open.

Hi Susan, I have such good memories of playing Clue, too.

Hi KM, thank you for mentioning the Brother Cadfael shows - I may check them out (the earlier ones, as you said) And I may have been one of those on the way to that midnight show...

I still make my grandkids play the game whenever I can. I did not know there was a movie! I'll add it to my list.