As I mentioned before, I have a brown thumb, primarily since those pesky plants demand regular watering.  And yet, this year at least, I managed not only to place colorful flowers and plants in front of our house, but also to keep them alive since April, verging on record territory for me.

So how have I done it?  Through a good nursery, research, technology, serendipity and one bad habit. 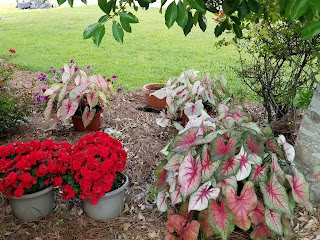 The Reiger begonias (the pots with the red flowers) and the caladiums (the plants with the colorful leaves) came from The Potting Shed and have done remarkably well.

Research involved figuring out where to put what plants, since our front yard has limited shade areas.  The begonias and the caladiums love shade.  Too much sun kills them.  Yet other flowers such as the zinnias and the geraniums love sun.


The technology we’ve used is both biological and mechanical.  The biological technology consists of the rose bushes you see in these pictures.  These are called “Knock Out Roses” (I think), perfect for people like me because all they need to thrive is to be left alone.  I can do that quite well.

The mechanical technology is nothing earth-shattering—a set of plastic sprinkler heads that connect in a line and hook to a garden hose on a timer.  But the contraption keeps the plants watered and happy.

Serendipity raised its head when we discovered that a calla lily had been reborn in a pot we cast aside a year ago.  Calla lilies are elegant.  And they must cling stubbornly to life for this one to come back.


And the bad habit?  The one flaw in the watering plan is that it can’t cover the two plants by the front door.  There’s no way to get the hose over there without stretching it across the driveway or entryway, and it looks bad.  However, every day when I leave work, I stop by the local Zaxby’s and get a drink for the drive home.  They always put a lot of ice in the drink, and I finish it long before I reach the house.  So when I reach the house, I pour the ice into the two plants by the door and throw my cup away.  You wouldn’t think it would be enough, but they like it.


The only thing I regret is that the landscaping in the front of the house doesn’t provide me with an area to sit and read.  I guess that will be a project for the back yard next year.

So fellow brown-thumbers of the world, take heart!  With a little planning, even we can maintain beautiful landscaping.

As a lifelong brown thumber I take hope from your post. Gorgeous plants, Nancy. Especially roses. You give me the courage to try again.

I'm a brown thumber too, which is especially embarrassing since I come from a long line of farmers. But I'm trying to cultivate a flower bed this year for the first time in ages. So far, so good. I almost killed a few of the plants yesterday when the sun baked them and the predicted rain turned into a mere sprinkle. At dusk, I saw the sad, droopy flowers and leaves and went out to give them a good soaking. I'm happy to report, they've revived this morning!

Lovely photos, Nancy. I'm another brown thumber. Bought basil plants this year and hope they won't die as they usually do in my care. And I do try to take care. I think I'd do best with the Knock Out Roses.

Knock-out roses, planted in well-drained soil in full sun, do very well with benign neglect. However, after prolonged below zero temps in Cincinnati, the canes have died back to the ground. But they regrow. The roses are almost a landscaping cliché: office parks, motels, gas stations, and boulevard beds.

And I do fertilize 3x a season with a systemic insecticide/fungicide.

I just went out this morning to see how my daylilies are doing. Great, except that I have healthy, strong stalks with each flower bud has been neatly bitten off by deer.

Last year they did in my hostas, which did not even try to come back this year.

Since daffodils tend to be deer (and rodent) proof, I've planted lots of them. They are beautiful in the spring.

I did manage to kill off some knock-out roses, but now have fairy roses thriving in the same spot.

Another black thumb here. I really do have to get some knock out roses. I've learned to only buy plants that "thrive on neglect." That's my signal to buy!