A Lesson in Top Down Economics by Warren Bull

A Lesson in Top Down Economics by Warren Bull 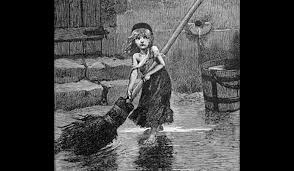 image from alamy (dot) com
During a recent (pre-COVID 19) trip to Savanah, Georgia, Hilton Head Island, South Carolina, and Daufuskie Island, South Carolina I was reminded about how the economy really works. My wife and I got tickets labeled “Basic Economy,” which was a new designation to me. It meant we had the cheapest of all tickets. We were not given assigned seats ahead of time. We had to check-in at the gate to get whatever seats were left over from active service members (no complaint about that), the precious, semi-precious, and common metals groups of passengers (platinum, gold, silver, copper, lead and nickel, in descending order) and, economy fliers. I am not certain how many groups of economy there were. Perhaps enhanced economy and middle economy came before basic. Basic was a more polite word than scum. People in higher priced thrones are shielded from the view of those in lesser, smaller, and narrower chairs by a curtain. Passengers in those cushier, more flexible tush-holders with a greater capacity for reclining, have better food, quicker access to a bathroom and a smaller attendant to passenger ratio.
The outgoing flight was a redeye and being shoehorned into the last row, where the seats did not recline at all, was actually a good thing for a man, like me, of a certain age. I did not have to climb over people and maneuver through a dimly lit narrow aisle to get to the bathroom.
Savanah was a lovely city which had many antebellum structures. It was not burned during the Civil War. Partly that was because, unlike Atlanta, the Confederates did not set it afire before Sherman’s Union troops ever got there. Confederate forces abandoned Savanah completely, the city residents did not oppose the Union army but wisely invited the Yankees to make use of the finest homes.
Hilton Head Island was also a wonderful setting. My wife and I were even allowed to visits large parts of the island. True, we had to pay for the privilege of spending time in some of the places where we were not actively excluded. On the other hand, we were able to see some restricted beaches as we drove by in our car. Parking places, however, were denied anyone who did not own adjacent property or have a membership in a local beach club. We stayed in a gated timeshare that checked for our permit in the car window every time we entered it.
We met with friends and had a great time. I recommend visiting the area and learning about the Gullah culture. There is nothing unique about the status awarded to the wealthy. I could make similar observations in the cities I have lived in. I suppose I am usually oblivious to the advantages I have become accustomed to in my daily life.  Time in Georgia and South Carolina made me acutely aware of the way money influences American life.

Email ThisBlogThis!Share to TwitterShare to FacebookShare to Pinterest
Labels: Economy

I've visited Hilton Head for a soccer tournament, but other than the soccer complex and family-style restaurants near our motel on the beach, we didn't see much of the place.

When we lived in Atlanta, we made the trip to Savannah every year. I loved eating on the riverfront watching the boat traffic and touring the historic sites, including the homes of Juliette Gordon Low, Girl Scout founder.