I was thrilled when my publisher asked me to write another series but a bit baffled when I was told to write under a pseudonym. My agent said this is done to differentiate the two series. So when my new Ice Cream Shop mysteries come out they’ll be written by Meri Allen. (A mix of my hometown, Meriden, and my dad’s first name, Allen).

The writing has gone well. I’m falling in love with my new characters, especially Grace Rhodes, a librarian with a secret past. When her friend asks her to help run an ice cream shop in Connecticut’s Quiet Corner, Grace jumps at the chance and of course, lands smack in the middle of murder. (Don't worry - if you’re missing the Lobster Shack series, there will be a Lobster Shack holiday story, “The Queen of Christmas," which will be up for preorders in November.)

I had some questions about writing two series and using a pseudonym, so I called on some friends for advice: Julie Anne Lindsey and Edith Maxwell, two talented writers who have successfully juggled series and pseudonyms for years. Between the two of them they publish under seven names: Edith Maxwell (Maddie Day, Tace Baker) and Julie Anne Lindsey (Julie Chase, Jacqueline Frost, Bree Baker).

I had questions, they had answers and reassuring insights. I hope this short Q and A helps every author who is switching gears not just with a pseudonym, but also with a new series and characters.

Julie:  I think you'll find it's easy to switch between author names because they're kind of irrelevant. Like nicknames, not other personalities.

Edith: Writing under different names presents both joys and concerns.

How do you shift gears when writing a different series and different characters?

Julie: As for changing between worlds and writing one series then another, I don't struggle with that because everything is so different in each series. The places and characters are real enough to me that I easily know what they'd do or say in each situation like I would with my friends in real life. So, I just tell their stories.

Tell us a bit about your evolution:


Edith: When my editor of the Local Foods Mysteries (my first Edith Maxwell series)
at Kensington Publishing accepted my proposal for the Country Store Mysteries, he said he wanted me to use a pseudonym. I agreed and settled on Maddie Day, but I wasn't clear why. My agent said it was probably to make me look like a new author to readers and booksellers. That series has done so well, I have a second Maddie Day series, the Cozy Capers Book Group Mysteries. I guess it worked!

As it turns out, I wasn't very smart choosing Maddie Day as a pen name. There are other Maddie Days out there, so my URL and all my social media accounts have to be MaddieDayAuthor. Next time I'll find a unique name if it kills me. A caution to writers considering a pseudonym - do your research first. Once you're locked into a name, you can't go back
My historical Quaker Midwife Mysteries are published as Edith. And my short stories are all written by Edith. I also had two early books written as Tace Baker - Speaking of Murder and Bluffing is Murder. The publisher has gone out of business, so Beyond the Page Publishing (who puts out the Quaker Midwife books) is going to reissue the pair with new covers (and a fresh edit update) as Edith Maxwell books. I love the name Tace, an archaic Quaker name I dug up, and maybe she'll come back with another series one day.

How to deal with conference nametags?
Julie: At Bouchercon, the mystery conference, I think Bree Baker will be in parentheses beneath Julie Ann Lindsey on my name tag. I was torn about the name tag situation because my latest Bree Baker book just released 9/24 but my first Cider Shop as me releases during Bouchercon so... I figured since one was my actual name, it would be reasonable to make that my nametag name and the other a subtitle. It can be tricky.

Edith: My editor never said I couldn't link the names, so link I do. I often sign emails and blog posts "Edith/Maddie." Having two names on a convention nametag means both are smaller, which is a bit of a drawback. So far I've appeared at mystery conferences under both personas, so it doesn't make sense to use one without the other. 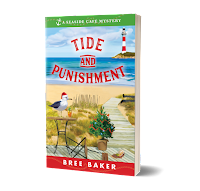 What about social media? Tips or tricks?
Julie: I don't know that I have any tips or tricks. I'm muddling along like everyone. I think just being ourselves and engaging readers is all we can do. Cross-promote when you can. Support yourself LOL. And maybe think of the pen name as a subtitle of the series- just there to help readers looking for that slightly different thing to find it. I often cross-promote between Julie Anne Lindsey and Julie Chase on Facebook, but on Twitter and Insta, it's just me.

Edith: I've opted to use a single web site for all my names and series. I have a MaddieDayAuthor.com site, but it's only a landing page to send readers over to EdithMaxwell.com. I also use a single bookmark, which I change up every year (or more frequently) with the three most current covers.
I have Instagram and Twitter accounts for both names, and two separate Facebook author pages, too. Managing all that is a handful, I can tell you.
I have unifying artwork for my author brand, which I was lucky enough to receive as a gift from my best friend for a milestone birthday seven years ago. The painting, titled "Edith's World," goes on my bookmarks, web site, business cards, and Facebook author pages.

Many thanks for your insights, Julie and Edith!

Writers, you ever used a pseudonym?
Posted by Shari Randall at 12:00 AM

I love reading how other authors handle the pseudonym conundrum. So far all of my books have been written as Kait Carson. She was born because in my very first book, I killed off a lawyer. Since my day job is paralegal, I was concerned that someone would think my dastardly attorney was based in real life, which he wasn't. Since then, I've found I enjoy having an alter ego.

Kait, that's such a perfect reason for writing mysteries under a pseudonym! I like the way you spell Kait - it's so distinctive. Also good for a pseudonym.

I don't use my real name, either, like Kait. My husband had just gone bonkers and decided to be a Methodist minister as I was starting to get published, so I wanted to separate my writing from his career. I did acquire another one with a work for hire, Janet Cantrell. I very much like not using my real name as a writer. I prefer to protect my real self from the public, and to put everything out there as Kaye and Janet.

Kaye, I am starting to understand how you feel. There's a kind of freedom to not being "myself" when I write. You have a lot of aliases to juggle, too!

I admire authors who can pull this off.

Thanks, Shari, Edith, and Julie. Using different names seems to add another level of complexity to the already complex business of writing and publishing. I hope I'm never faced with it.

I occasionally write political satire, which is very different from my usual fare. When I do, I use the pseudonym Pat Anne Sirs.

I was asked to write my Haunted Library series under a pseudonym, and so Allison Brook was born. Er-created. I haven't found this to be a problem at all since my readers know that Allison is Marilyn.