The Importance of Setting By Ang Pompano 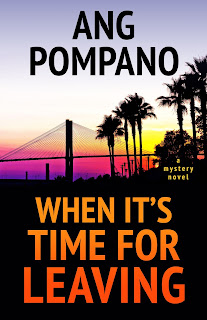 Thanks for inviting me to visit Writers Who Kill! As I wrote my first novel, When It’s Time For Leaving, I realized that choosing a setting was important, so important in fact, that done well, setting can seem like a character. So, I was very careful when I chose an island off the west coast of Florida similar to Siesta Key. As is Siesta Key, the island was not far from the great Sunshine Skyway Bridge. This was important because the protagonist in my mystery, Al DeSantis, developed a fear of bridges after a drug dealer nearly rammed him off the New Haven Q Bridge in the story opening.

So now I had a mystery that I thought was good, and I had a setting that worked. As the plot developed, there were important scenes not only on the island, but on the Sunshine Skyway, and even one that involved alligators in the Everglades. I worked on the story for about a year and finally sent it to my agent. “It has everything,” I told her. “It’s a mystery, but also has action. It has bridges. It has islands. It has alligators!”

End of story? No. That would be too easy. Later, after talking to publishers, my agent wrote back. “I can’t sell it. There are too many stories set in Florida.”

“But I’ve got islands, I’ve got bridges, I’ve got alligators! It’s a Florida story. And you love it!” She made me understand that while that was true, I wasn’t Carl Hiaasen. Hell, I wasn’t even Tim Dorsey. “Change the setting and we’ll send it out again,” she said.

I know Florida. I was raised there for part of my childhood. The only other place I knew well was Los Angeles. That might work. The Vincent Thomas Bridge stretches over the Los Angeles harbor. I could picture my character Al freaking out on that bridge. And maybe I could change the Everglades to the desert. The alligators could become rattlesnakes, or black bears. Maybe rabid coyotes? This was going to be work. But I had a good mystery to tell, so I’d do it. I pitched it to the agent. “Nope. Too many mysteries set in L.A. Find another setting,” she said.

I racked my brain. Then it hit me. Savannah! I loved Savannah. It was warm. It had islands. It had a bridge. A big bridge. A big scary bridge. And best of all it’s not far from the Okefenokee Swamp which has alligators. Lots and lots of alligators. And so, Al DeSantis ended up in Savannah at the Blue Palmetto Detective Agency. It took another year to rewrite the story placing it in Savannah, because as you might imagine, changing the setting involves a lot more than hitting find and replace. Still, it was the best move Al (and I) ever made. 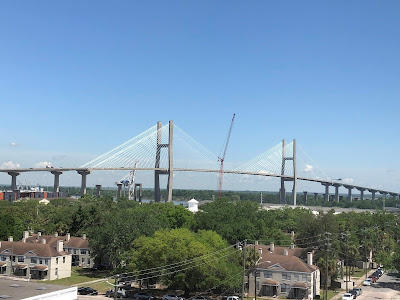 The Bridge in Savannah

Writers, what about you? How important to your story is setting? Would you make major changes to your story in order to get it published? And readers, what books do you admire for their setting?

Ang Pompano has been writing mystery for more than twenty years. His mystery novel, When It’s Time For Leaving was published on October 1, 2019 by Encircle Publications. His short stories have been published in many award-winning anthologies, including the 2019 Malice Domestic Anthology, Parnell Hall Presents Malice Domestic: Murder Most Edible. His newest story, "Stringer" will appear in Seascape: The Best New England Crime Stories 2019. In addition, he has written many academic pieces including one on teaching detective fiction. A member of Mystery Writers of America, he is a past recipient of the Helen McCloy/Mystery Writers of America Scholarship for a novel in progress. He has been on the New England Crime Bake Planning Committee for fourteen years and is a long-time board member of Sisters in Crime New England. He lives in Connecticut with his wife, Annette, an artist, and his two rescue dogs, Quincy and Dexter.
Posted by E. B. Davis at 12:00 AM

congratulations on your debut! Savannah is a great setting.

Sometimes I change the setting in a short story to freshen it up or add tension.

Welcome to Writers Who Kill, Ang! And congratulations on your debut! How exciting. Setting is vital and Savannah sounds perfect! Can't wait to read it!

Setting shapes a story so much! Changing it like that must have taken a great deal of patience and attention to details. But with a solid story, it sounds like you managed it.

Best of luck with the book (although I'm quite aware that, in addition to luck, it's a great deal of hard work and perseverance that lead to success.)

Thanks, Margaret. Yes, changing the setting can really freshen up a story and bring it in a whole new direction.

Thanks, Annette. I've always loved Savannah. I don't know why I didn't think of it in the first place.

Thanks, KM. It did take a year of rewriting to change the setting. And you are right, the setting does shape the story.

And readers think the life of a novelist is glamorous! Congratulations, Ang, on persevering.