I’m a life-long classical violinist, from the age of ten anyway. So when I started out to write in this genre, I created a character who was also a classical musician, but a keyboardist, just so she wouldn’t be exactly like me. And I had her become a composer and conductor, two things I’ve dabbled at, but never did for a living. I guess you could say Cressa Carraway is my alter-ego.

During the ten years I took to get the first novel in shape (never mind the two I wrote before that—they’re hopeless), I took classes, learned about critique groups, joined writers’ organizations locally and, eventually, online. In other words, it took me about ten years to learn how to write a mystery.

Then I started querying agents. I learned that classical music is not considered by them to be a popular hook. I ignored those who said that and kept querying. For a long time. I ran out of agents and started on small presses. Lo and behold, Barking Rain Press decided to take it. I was thrilled! (It wasn’t my first novel accepted—I wrote a few more during that ten years and had two others accepted by other small presses, but it’s my first baby.) It even became a Silver Falchion Finalist at Killer Nashville. 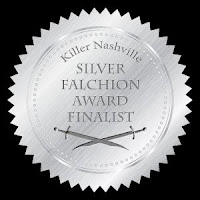 I wrote a sequel and Barking Rain published that one, too. The series even acquired some fans. Things were going well!

Then I got sidetracked on other projects, always meaning to get that third one written. Soon, soon. But, before that happened, things started getting out of kilter at BRP. Royalty statements were late. Payments were late. Communication was extremely poor. I had asked for my rights back from another small press where I had disastrous experiences and ended up self-publishing that series. So I decided to get my rights back for this series, too.

Just about the time the second book reverted to me, BRP announced they were going to shut down! Good timing on my part, for once. So, what to do next?

CreateSpace, the self-publishing tool I used, wasn’t there anymore. Oh brother! What a bother. I actually DID come up with an excellent solution, but I have to leave you with a teaser—can’t tell you yet what will happen. Tune in two Sundays from now!

You have my attention, can't wait to find out.

Congrats! What a journey.

You certainly have had some challenges. But I'm glad that you haven't let them defeat you. Can't wait for the next chapter.

Thanks for stopping by, Kait, Margaret, and Grace. Just...One More Thing.

Well, we certainly see why you are such a great mystery writer. You've left us in suspense about your solution, and we'll have to wait two weeks for the next installment.