The Eyes of Texas: Private Eyes from the Panhandle to the Piney Woods edited by Michael Bracken 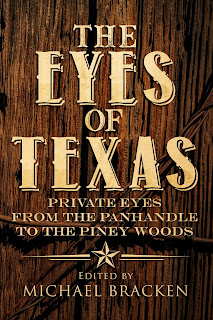 The Eyes of Texas: Private Eyes from the Panhandle to the Piney Woods edited by Michael Bracken

Texas has it all, from bustling big cities to sleepy small towns, and law enforcement alone can’t solve every crime. That’s where private eyes come in. They take the cases law enforcement can’t—or won’t. Private eyes may walk the mean streets of Dallas and Houston, but they also stroll through small West Texas towns where the secrets are sometimes more dangerous. Whether driving a Mustang or riding a Mustang, a private eye in Texas is unlike any other in the world.

My included story, Harvey and the Red-Head, is my first private eye story. I wrote it in response to an open submissions call. I thought learning the backstory of The Eyes of Texas from its editor, Michael Bracken, might be fun for WWK readers.

1) How did The Eyes of Texas anthology come to be?

In the early 2000s, I edited five hardback anthologies of crime fiction—the three-volume Fedora series, Hardbroiled, and Small Crimes (all scheduled for rerelease as trade paperbacks)—and I was then, and have been ever since, pitching anthology concepts to various publishers.

I’ve lived in Texas since September 1994, and “The Eyes of Texas” is a well-known phrase here, being both the fight song for The University of Texas and part of a public safety campaign encouraging state residents to report criminal activity. As a crime fiction writer and someone who enjoys wordplay, I saw it as a reference to the private eyes of Texas.

I originally pitched the concept of an anthology of private eye stories set in Texas to a regional publisher who was interested, but only if all the contributors were Texans. Unfortunately, the opportunity fell through, and the concept disappeared into my idea file until February 2017 when I learned Bouchercon was coming to Texas.

I retrieved the original proposal from my files, updated it, and pitched it to Eric Campbell at Down & Out Books with the suggestion that The Eyes of Texas be released to coincide with the Dallas Bouchercon. Three days later Eric gave the project a thumbs up and work began. The Eyes of Texas now is available at https://downandoutbooks.com/bookstore/bracken-eyes-texas/ .

2) Why private eyes rather than cowboys or oil tycoons?

The original idea was sparked by the phrase “The Eyes of Texas,” and once I had the image of private eyes in Texas, nothing else made sense. I’m certainly not opposed to editing anthologies about cowboys or oil tycoons, but I have a fondness for private eye, hardboiled, and noir stories, so my mind tends to drift in that direction when I write and when I edit crime fiction.

3) There are seventeen stories in The Eyes of Texas. As an editor, what process did/do you use to select stories?

My original concept was to offer a range of stories that reflected the diversity of Texas. I think this, from my introduction, sums up my thinking:

“Texans drink a lot of beer, watch a lot of football, and listen to a lot of country music, but the Hill Country around Fredericksburg is one of the top wine destinations in the world, and Texas is home to world-class symphony orchestras, ballet companies, and art museums. With sprawling cattle ranches, Texas is still home to plenty of traditional cowboys, but with both NASA and SpaceX, Texas is also home to the space cowboys leading us beyond the confines of our planet.”

So, I wanted stories that reflected this diversity, not only in the characters, but also in the physical locations where the stories are set.

4) What did/do you use to reject stories?

Some submissions didn’t fit the parameters I set out in the guidelines, so they didn’t survive the first cut. After the first round, though, the decision process was quite difficult. Many of the stories were clearly publishable, so I had to, first, consider how well each story fit my vision for the anthology. For example, I tend to favor hardboiled and noir stories over cozies.

Next, I tried to ensure that the stories represented a range of settings within Texas, that there was diversity in the casts of characters, and that there was diversity in the types of cases the private eyes handled. I mostly accomplished this, but there are, if I remember correctly, five stories that deal, in one way or another, with the aftermath of Hurricane Harvey.

Last, but not least, I wanted stories that made me feel something as I read them. A story that put a tear in my eye or a lump in my throat always has an advantage over stories that are clever but without emotion. 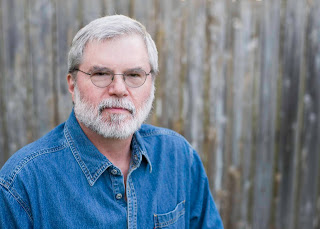 Michael Bracken has received multiple awards for copywriting, two Derringer Awards for short fiction, and the Edward D. Hoch Memorial Golden Derringer Award for lifetime achievement in short mystery fiction. The author of several books and more than 1,300 short stories, he has edited seven crime fiction anthologies. One of the most prolific living short-story writers, he had—before the streak ended in May 2018—one or more short stories published each and every month for 178 consecutive months.

Email ThisBlogThis!Share to TwitterShare to FacebookShare to Pinterest
Labels: #Bouchercon 2019, #Down & Out Books, #Michael Bracken, Hurricane Harvey, The Eyes of Texas

Michael, thanks for being here today and talking about the process behind The Eyes of Texas. Thrilled to be part of it.....

Quite an accomplishment, Michael. Congratulations. And congratulations to you Debra, for having your story selected. I'll be at Bouchercon and look forward to seeing you both.

Sounds like a book to add to my one-story-at-bedtime collection (maintained in addition to my TBR stack of books and my Kindle list.)

Thanks, everyone, for stopping by and for your kind comments. Hope you enjoy the anthology!