Fear vs. Passion - Will You Ever Write? by Debra H. Goldstein 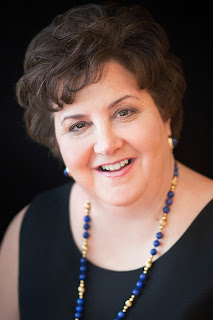 Fear vs. Passion - Will You Ever Write? by Debra H. Goldstein


My mother kept a copy of my first novel on her fireplace mantle with its back cover showing.  Her explanation to her friends was that its headshot was the best picture she had of me. If she’d still been alive, she would have “accidentally” left a copy of the May/June 2017 issue of Alfred Hitchcock Mystery Magazine on the table, as if she had been reading it, when she hosted her weekly Mah jongg game. Whether she or her friends pointed to it, she would have waved a hand and rested it on my name on the cover while saying, “I don’t usually read mystery magazines, but it has a story of Debra’s. You know, it’s difficult to get published in Alfred Hitchcock, but they took her on her first try.”


What she wouldn’t tell them is the book, Maze in Blue, and the AHMM story, The Night They Burned Ms. Dixie’s Place, almost didn’t happen because of my own fear.


Although I often talked about my desire to be an author, I wrote nothing except boring briefs, opinions, and legal articles until a friend challenged me to use her condo for a weekend to find my writing voice.  The unsaid part of the offer was if you don’t do it, don’t talk about writing anymore.


During our beach weekend, I wrote eighty-five pages and realized I had the beginning, middle and end of a book in my head. Fear gave way to confidence and eventually, the 2012 IPPY award winning Maze in Blue, a mystery set on the University of Michigan’s campus in the 1970’s. The final book contains five of the eighty-five pages written at the beach. Since that weekend, I have written another book, Should Have Played Poker (Five Star 2016), signed a three-book contract with Kensington Press for the Sarah Blair series, and had twenty-six short stories published in periodicals and anthologies, but the one in Alfred Hitchcock almost never happened. 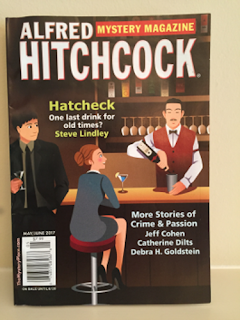 I was afraid I couldn’t write anything good enough to meet AHMM’s standards.  Thanks to reading craft books, dissecting stories of great writers, taking classes, and analyzing feedback from friends, I knew my technical skills were improving, but AHMM stories have heart and fire. My early tries lacked any sparks. They were too much tell rather than show.

It took a long time to trust readers to go on an imaginary journey with me instead of feeding them every detail.  Once I stopped spoon-feeding, my characters and settings became realistic and my stories more enjoyable.  I submitted to markets ranging from online periodicals to literary magazines to open anthology cattle calls.  Acceptances became more frequent.  If something was rejected, I edited and submitted it elsewhere. For some stories the process was repeated several times before the piece found a home (and being honest, a few will forever reside in my computer).


Even though writers I respected encouraged me to send a story to Alfred Hitchcock or Ellery Queen, I didn’t. I couldn’t.  I read both magazines and tried to analyze the different styles and voices each published, but fear paralyzed me from taking a chance. My rationalization was my stories were too simple, too comical, too one-dimensional, too crappy, but then I wrote a story with different layers and concepts entwined within it.  It was special. I knew someone would publish it, but who? There was only one way to know if AHMM or EQMM would take it. Submit it. The voice seemed more suited to AHMM, so I sent the story off aware turnaround time for acceptance or rejection might be nine months. I steeled myself to receive bad news, so you can imagine my surprise when I received an acceptance e-mail.
In retrospect, what was the worst thing that could have happened? A rejection. That wouldn’t have stopped me from improving the story and submitting it elsewhere. My writing has a long way to go, but I’ve learned overcoming the fear of writing is perhaps the greatest gift I can give myself --- and it gave my mother something to brag about.
Posted by Debra H. Goldstein at 12:00 AM

What a wonderful post, Debra. So glad you didn't let fear rule!

Terrific story, Debra. When AHMM bought the first story I submitted to them, it was such a "Wow!" moment. They've bought two more since then, and the "WOW" is just as big and exciting every time. The fear never goes away completely either, but it gets easier to ignore.

Welcome to the club folks who decided "so what if they reject it?" about their writing and went on to be published.

I write for myself. Not that I don't want to share my writing with an audience (that's such a thrill!) but even if I never got anything accepted, I would continue writing. Possibly I wouldn't submit so much, and I might not spend quite so much time polishing work I wasn't planning to submit, but I'd still write.

Rejections rule! If you're not submitting, you're not getting the word out.

Debra, I loved your first book, and now you have encouraged me to send short stories to Alfred Hitchcock. I have many of them. I was touched about your mother. Unfortunately, both of my parents died a year apart before I'd started writing my first mystery.

Thank you, Debra, for this inspiring post. So delighted that your first AHMM publication also is an Agatha nominee!

You have revealed the secret of a successful writer.

Gloria - go for it! Paula...Thank you... I really am thrilled to be in the group of Agatha nominees for "The Night They Burned Ms. Dixie's Place." Publication validated choosing submission. The Agatha nomination is icing on the cake....Very nice icing.
Warren... the other secret is the support of so many good friends. Margaret, KM, and Kait - all of you write so well and are models for submissions (even the things you write for yourself are pretty well polished). Julie...that thrill is fantastic. Now, the key is to write something equally worthy of submission.

When we write, we really put ourselves out there, and it takes a really secure person to do that. Congratulations on conquering your fears and producing your books and short stories. Your mother is very proud of you and all your accomplishments.

Very well done, and so true. I went through some of the similar steps you did. I didn't let the rejection tear me down and I actually published a book (almost to my surprise). My problem now seems to be continuing to write with the time constraints of a needed day job. You're progressing quite well Debra. Keep up the good work.

Grace and Linda,
Appreciate your comments and return the encouragement to the two of you. Linda, it is hard juggling, but everything works out...it simply takes time.