Murder is Her Hobby
By Margaret S. Hamilton

During Thanksgiving weekend, I visited the “Murder is Her Hobby” exhibit at the Renwick Gallery in Washington, D.C.  Frances Glessner Lee meticulously crafted the nineteen miniature crime scene models, known as the “Nutshell Studies of Unexplained Death” in the 1940s and 1950s. The models were on loan from the Maryland Office of the Chief Medical Examiner, where they are used to teach crime scene investigation.


Based on true crimes, Lee wrote fictitious police reports and witness statements to accompany each model. Visitors to the exhibit read the witness and police statements and used small flashlights and magnifying glasses to examine the crime scenes, constructed on a scale of one inch to one foot. Conflicting clues were everywhere. Was the death a murder, suicide, accident or due to natural causes? Most of the models depicted the interiors of middle- and lower-class homes typical of the thirties and forties. Lee was a master of miniature construction, painstakingly creating dolls using porcelain heads and arms attached to cloth bodies weighted with lead. Chairs, beds, and dressers, and tables set with dishes and food. Bathrooms and kitchens. Barns, garages and attics. Many of the victims were ordinary women, who cooked, cleaned, laundered clothes, and cared for their children. 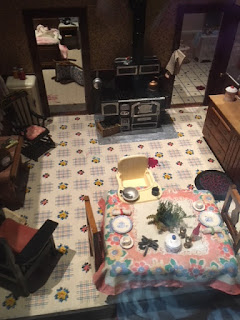 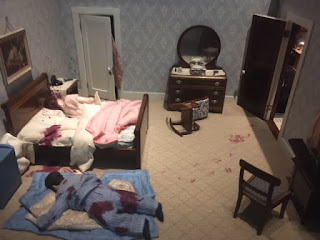 The “Three-Room Dwelling” is the largest of the models, with multiple crime scenes in the kitchen, master bedroom, and baby’s room. Both parents and their child were murdered, a shotgun left in the kitchen. Two windows were left slightly open, with no sign of forced entry.  The kitchen table is set for breakfast, but no one had eaten. Blood spatter on the walls? Were the bodies moved after being shot? Did the family own a gun? Any valuables missing? What was the killer’s intention? I found a Washington Post article about three forensic experts who examined the model. Fingerprints, ballistic tests, and gunshot residue on the hands of potential suspects would be tested. The blood trail through the house would be assessed for DNA of the victims of killer. The medical examiner would determine stage of rigor and body temperature, and examine stomach contents. 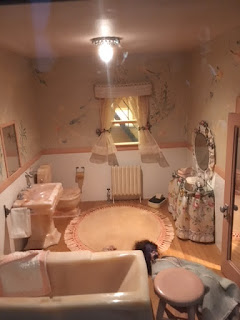 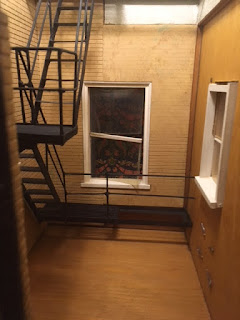 In “Pink Bathroom” a woman who lives alone in an apartment building is found dead in her bathroom. The bathroom door is closed, so the janitor ascends the fire escape and climbs through the window. The dead woman is wearing a bathrobe, her slippers neatly set on the rug, a stool set at an odd angle. Did she die a natural death or commit suicide? Or something more sinister? The wallpaper is festooned with flamboyant fish, which adds a surreal touch to an otherwise sobering scene. In his witness statement, the janitor couldn’t remember if the window was open or closed. Very suspicious. Lack of immediate decomposition odor indicates that the window was closed. I suspect the janitor was involved. 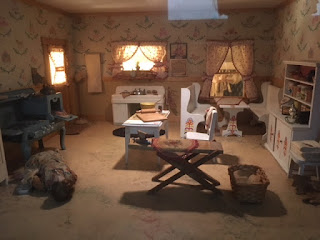 In “Kitchen,” a woman whose face shows the rosy hue characteristic of carbon monoxide poisoning, lies dead next to the stove, the gas turned on, the doors locked with the cracks stuffed with newspaper. An obvious suicide? A recently baked cake cools on the stove, but the victim was in the middle of making a pie. The kitchen sink is piled with dirty pots and pans. A visitor’s chair is pulled out, a drink on the table, and ice cube trays on the floor next to the victim. Murder or suicide? I suspect the visitor had something to with the woman’s death, though after locking the doors from the inside, the only exit would be through the kitchen window.


The exhibit was crowded, the crowds of families jostling for space in front of the small models. Older children and teens enthusiastically voiced their opinions. Many adults who had seen crime scene investigation shows on TV pointed out the abundance of over-turned chairs, blood trails and spatter, and out-of-place objects. Everyone’s a CSI investigator.


The crime scenes depict ordinary crimes—fires, gunshots, hangings—with what could be construed as ordinary motives of passion, hatred, or greed. There are no correct answers—only speculation based on the evidence.


The Smithsonian conservators repaired and refurbished the models with low-heat LED electronics and glass bulbs, and they are now back in Baltimore ready for use in analyzing crime scenes.


Readers and writers, did you visit the exhibit?

I've never heard of this...how interesting! I love the vintage feel of the models, which look like something out of an Alfred Hitchcock movie.

Your information was new to me. How cool. I will check it out.

My SinC chapter visited this exhibit in its :home," the Medical Examiner's office in Baltimore. It was fascinating.

Margaret, this was the coolest exhibit. It was absolutely packed when I went, and I imagine it was when you were there, also. the forensic aspects are, of course, fascinating, but I also was intrigued by the artistic/craft aspect that attracted the museum to exhibit it. All in all, one of the best museum exhibits I've seen in ages.

I had never heard of this and wished I could have visited it before it went to Baltimore. I wish I'd known about it before, and I thank you for the pictures. Do you think this exhibit will be traveling to other places like maybe Cleveland?

Becky, most of the crimes portrayed were domestic, for motives that would be the same as those of today.

Warren, I'm intrigued by both the artist's obsessive attention to detail as I am to the motives for the crimes. I'll refer to the photos when I write a description of a crime scene, to ensure that I get enough of the right kinds of details.

Kathleen, how wonderful that you saw the exhibit in the quiet confines of the ME's office, instead of the museum.

Shari, I was astonished to learn the lengths to which the artist went to create accurate scenes...letters, newspapers, clothing, including undergarments.

Gloria, the "nutshells" are on loan from Harvard University to the Baltimore ME's office. I doubt they will go on tour. The Smithsonian restoration staff did a wonderful job cleaning them up and rewiring them.