Interior decorator Madison Night is no stranger to the occasional odd inheritance. But when an octogenarian friend dies and leaves her a pajama factory, the bounty is bittersweet. Once a thriving business, Sweet Dreams closed decades ago after a tragic accident took the life of a young model. Or was that simply a cover up? Between her friend’s death and her own stagnant life, Madison is tempted to hide under a blanket of willful ignorance. But when family members and special interest groups lobby to expose the secrets of the factory, Madison gets caught in a dangerous nightmare and discovers that sometimes, the bed you make is not your own.
https://www.dianevallere.com/madison-night 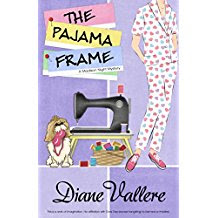 Doris Day is one of my favorite actresses. I watched a lot of her movies when I was younger and still like them. Few women of a certain age don’t like Doris. The happily-ever-after endings, the morality of the characters Doris portrayed, the good-looking male leads, and the clothing Doris wore—all of which made for great female entertainment.

Often murder motives in mysteries are far fetched, but the motive for murder in this novel was grounded in the real world. Cute dogs, pastel fabrics, and tailored clothing aside, Diane takes on some real-world issues in this book and some of her character’s issues, too.

Why did Madison name her little Shih Tzu, Rocky?
DV: Rocky is named after Rock Hudson. She added the “y” because it makes the name cutesy, but both Captain Tex Allen and Hudson James, the two men in her life, only call him Rock.
Does the Captain’s relationship with Rocky mirror his relationship to Madison?
DV: I think you can tell a lot about a person by how they interact with someone else’s pet, so having Tex interact with Rocky gets to show him in a different way than only showing him interacting with Madison.

Why doesn’t Madison have many close friends her own age?
DV: Madison left Pennsylvania for Texas, not for any reason other than the person she was getting away from was in PA and would never come to TX. She had friends there, but after started over with a whole new life, she discovered that it’s harder to make new friends in your late forties than your twenties.

At the cemetery while looking at Alice Sweet’s headstone, Madison has a moment of reckoning. What hit her so hard?
DV: Even though Alice was decades older than Madison, the two women were friends, and Madison sees Alice’s life as having been similar to hers. She realizes how alone she’s been in Texas, how here’s a woman who died and her family is treating the death like an inconvenience. Madison, who has been trying to open up to people feels a bit like she’s losing herself in the process of inviting people into her world. It’s a real struggle: stay isolated and protect herself, or be vulnerable to others and risk being hurt.

Donna Nast (former Officer Nasty) talks a lot. She claims Madison lives in the past. Does she speak the truth? 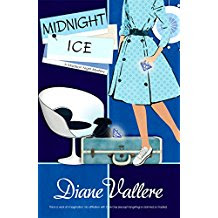 DV: Nasty is a very interesting (and fun) character for me because she represents what I think a lot of people might think if they encountered a real life Madison Night. Madison does dress in vintage, and her business does revolve around the midcentury style, and people often assume she’s ignorant of technology or modern business practices.

I like to think of Donna Nast as Alex Krycek from The X-Files. She has her own agenda, and you never really know whose side she’s on.
Nasty also said of Captain Tex Allen, “For him, the job comes first. Period.” True or is she just a “think-she-knows-it-all?”
DV: I’m going to leave this one unanswered so the reader can decide for themselves!

I was surprised that Donna Nast felt impacted by a man’s suicide she may have indirectly caused even though she didn’t know him. Does Donna have more emotional depth than readers perceive?
DV: I think every single person has emotional depth, whether we like them or don’t like them. Nasty is a great nemesis for Madison, but to me she’s more interesting because she does have layers.

Although Donna Nast isn’t pleasant, she was more forthcoming with information about a past case connected to Madison’s case than Captain Tex Allen. He can hide behind the shield, but withholding information is a kind of lying. Why would he do that to Madison?
DV: I can admit that understanding police procedure and behavior is the steepest learning curve I have when writing a cop, and I learned early on in this series (after consulting with a 25-year homicide detective) that there are things a cop would not discuss because it would jeopardize a case. Tex will share information to a point, but he wouldn’t want Madison to think he wants her to put herself in danger. Their relationship has changed a lot since the first book, when she proved to him that she can think through facts and evidence clearly, but they still have a police/civilian barrier.

“[Madison’s] My desire to live an independent life without the possibility of emotional connection or pain dissolved.” (Kindle Loc. 3457) What did Madison discover about Alice’s life that affected her so deeply as to change her path?
DV: The death of her friend (regardless of her age) made Madison see that life is short and feeling alive—and experiencing the messiness that goes with the ups and downs of that—is better than going through the motions. In her friend’s life she saw opportunities lost and doesn’t want that to be her.

You have four mystery series, but this fall you released a science fiction novel. Has sci fi always lurked as an interest?
DV: I think of MURDER ON MOON TREK 1 as a mystery set in outer space more than a science fiction novel. I love Star Trek and UFO and wanted to have the freedom to completely create an alternate setting while still relying on clues, evidence, and sleuthing for my amateur to solve the crime. I expect Sylvia Stryker to have more adventures, but I don’t expect to delve farther into sci fi than dipping my toe, which is what I’ve done here.

What’s next for Madison?
DV: I’m currently working on book 6, which is expected out later this year. In her efforts to expand the boundaries of her life, she has been bidding on higher profile jobs, and in book 6 she’s competing in a design competition that pits her and her mid-mod aesthetic against more commercial designers throughout the state of Texas. Unfortunately, a computer hacker is wreaking havoc on the very technology Madison is forced to embrace…

Can't wait to catch up with Madison, Diane. She's always been a favorite of mine - and I love her vintage vibe! All the best with the new release.

What a fascinating variety of novels and characters you have! And you manage to keep them all straight. Thanks for sharing with us.

Congratulations on the new series.

Diane -- such a fun series concept. Best of luck with numbers 5, 6 and however many more ...

Thanks to the Writers Who Kill for having me here today! E.B., as always, insightful questions and conversation.

Congratulations on your new series. I can't wait to read it.

So much fun! I love midcentury style, too.
Best wishes with your new series!