THE AMISH IN OHIO

Most of the Amish in Ohio are in Holmes County and areas south of Wooster, Ohio, but there are a lot of Amish who live and farm in Middlefield and Mesopotamia, Ohio. Both of those Amish communities are not much more than fifteen miles north of me. Because the cost of land has increased in those areas since a lot of people from Cleveland have moved out into these areas, into a township north of me and now some Amish have moved south and there are several Amish families close to me in my township now. Several families live less than a mile down the road on a side road. Because the Amish have church in their homes or barns every other Sunday, the Amish families in horse and buggies go past my house. Maggie, either from the front window in my living room if she’s inside or beside my house if she’s outside barks at them, probably because she thinks horses don’t belong on the road.

Eli Miller was the first Amish I became acquainted with. He had a tack shop in the Mesopotamia commons where I went to buy tack for my horses. He was a very friendly and nice man. One night when my husband and I were at an auction in Middlefield, we sat next to Eli. When the auction was over, whoever he came with must have left without him so we took him home.

There are other Amish I’ve enjoyed visiting with, too. My brother Phil gives my sisters and me  sizeable gift certificate for Bluestone Perennials in Madison, Ohio at Christmas so on the first Saturday of May the three of us go there to use them, but first we stop at Sugarloaf Nursery in Parkman, Ohio just about 8 miles northwest of me on a side road. An older Amish woman and her husband have four greenhouses and the shop, and the woman was always glad to see us as we chatted away about flowers and vegetable plants. My sisters always bought plants from them, and I’d buy maybe only one or two because I lived close enough to come back the following week while my sisters lived too far south and with all the plants the three of us buy, there wouldn’t be room for them in the back of whoever’s car we were riding in. In the last few years her teenage granddaughters have taken over at the sales desk. We always stop at an Amish farm bakery just down the road, too, when we leave there, and we each buy something good like homemade bread or something sweet like cookies or sweet rolls.


Although I haven’t met the families slightly south of me, I have met Levi Eicher, who lives a few miles north of me and is the blacksmith for my ponies. I have to drive to his house to pick him up, and several times he was out back working so his wife invited me in to wait for him. She found out that I write mysteries and said she loved reading them so I gave her a copy of my first book The Blue Rose and signed it to her. Another time I hired their teenage daughter to clean my house, too.

I shop at Aldi’s and on certain days there are lots of Amish women in there with their little ones. We have what are called Amish Taxis - people with vans or large SUVs who bring them shopping and they really pile their carts high with groceries. I love their little ones. They are so adorable.

About ten years or so ago, at the Buckeye Book Fair in Wooster, Ohio, I met Karen Harper, who writes several series about the Amish as well as some stand-alone books. She lives in Columbus, Ohio and Naples, Florida. Because she was interested in the Amish she often visited their area and would visit their shops in the small towns and ask questions of them which they nicely answered. I fell in love with her books, and only recently I have started to reread them because it’s been so long since I finished them. 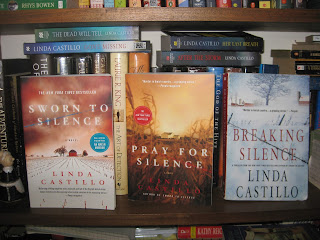 And then there’s Linda Castillo’s books which I blogged about a while ago. She’s written at least seven Amish mysteries. I first met her when she gave a talk at the Hudson Library where Amanda Flower is the librarian. She lives in Texas with her husband, but I think she mentioned that she had lived for a while in the Amish area not too far from Columbus. Her books seem so real to the area that I think she did live near there. I was fascinated listening to her and bought the first three books in her Amish series and fell in love with them.

Amanda Flower also writes an Amish series. She’s a member of my NeoSinc chapter of Sisters in Crime. I’ve read and enjoyed hers, too, but like mine the murders aren’t quite as bloody. They’re much more in a very cozy nature.

Also, I read a weekly column written by Lovina Eicher, an old Order Amish writer, cook, wife and mother of eight. She lives in southeastern Michigan, and is the co-author of three cook books. She writes about her family and what’s going on. She’s a grandmother now, too. I love reading her columns. 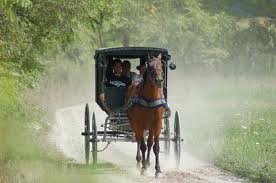 I just started my tenth book a month ago and because of Christmas, etc. I haven’t gotten too far with it yet, but because it takes place in a fictional town in Northeast Ohio, I have decided to add two Amish families to it. I’ve already written their bios. Now that all my Christmas decorations are down and taken out to the garage by the barn, maybe I’ll have more time to get back to the book, a March book since I’m going by the months. Right now t’s called Daffodils in March and I’ve already murdered my first person in a prologue which is the first prologue I’ve written in any of my books.

Note: Except for the first picture I took in Mesopotamia at the Commons Store, and the picture of the Sugarloaf Nursery, I diidn't take the others but downloaded them because I know the Amish don't wsant their pictures taken.

Have you ever met any Amish people?

Email ThisBlogThis!Share to TwitterShare to FacebookShare to Pinterest
Labels: Amish, Writing about the

We have a Mennonite community in middle Georgia that runs a bakery and restaurant -- one of our favorite stops should our travels take us into that part of the state. Great piece here, Gloria. I especially liked the pictures.

I haven't officially met an Amish person but one memory stands vivid in my mind. We had gone to a local event in Cortland, Ohio. The magazine "Reminisce" had a horse drawn wagon travelling across America. The horses were magnificent, and they were spending the night in the meadow of a friend from my writers group. By word of mouth, friends and neighbors came to visit the travelers and their horses. Quite a large group had gathered in the meadow and I noticed an Amish family. From the back, in their soft blue dresses and boys in hats, I knew this was a large and growing family. One of the youngest girls had french braided pigtails just like my little sister years ago. And when she turned around... just like my sister's bold spirit, that little Amish girl was wearing neon colored sunglasses under her sweet Amish bonnet. LOL Laura

Love your photos, Gloria! When we lived in NE Ohio, the Amish people were a respected part of our world.

Tina, there are Mennonites in Ohio, too, but not as many. Most of those seem to be by Wooster, Ohio.

Laura, I remember that traveling Wagon. I saw it, too, but not in Cortland. There was a write up in the Tribune if I remember correctly.

Margaret, I think they are pretty much respected here, too, although I know some people get annoyed if they are traveling behind them because they go much slower than cars. It doesn't bother me, but it does people are who in a hurry.

Most of the Amish in our county have moved (probably to Ohio and Michigan!) because of spiraling land prices around here. Over the years, however, I have interacted (and given rides to) many Amish people, and assisted in puppet shows at the Amish school. One of my daughters became good enough friends with an Amish girl with whom she worked that she was invited to her wedding.

I'm not sure if it's still true, but the volunteer firemen used to know that if you needed help, the Amish men would respond on the third bell or siren. They would prefer not to participate because fighting a fire needs someone in charge, and no one should be told by another person what to do. However, if the situation is dire enough, cooperative support of the community overrides that.

We occasionally still see an Amish buggy tied up in the hospital parking lot or someplace. We do have several large Amish markets, and some local stores sell Amish furniture.

I have never felt comfortable enough with my grasp of Amish culture to use any as characters in my fiction. I know they value privacy, and I've never been able to get my mind around their thinking.

I am an admirer of their quilts.

Yes, I went to Franklin and Marshall College in Lancaster, PA, which is the heart of Pennsylvania Dutch Amish country. I saw horse-drawn vehicles quite often on the roads and the farmers market in Lancaster was terrific. We used to go to the auction just to see the chickens, goats, sheep and bunnies that were there to be sold. It was as good as any county fair without having to buy a ticket!

Kathleen, there is a strong Amish community a little further north of you in PA. We've been through those towns on our camping trips. Intercourse is one of them, and I think something like Bird in the Hand, if I'm remembering correctly. It's around Lancaster, PA.

In Lovina Eicher's latest column she talks about missing where she lived prior to coming to Southeast Michigan. However there are times they get someone to drive them back to where they came from for weddings and funerals, etc. I know when my family has been camping in campgrounds not too far from Cook Forest there are Amish and/or Mennonites who come in vans to set up their tents etc. I don't know about them volunteering to fight fires in our small area, but I'm sure they do in the larger communities to the north. The Amish men carry cell phones, too, because of their businesses. I had an Amish crew put a new roof on my sun room two years ago. They had an English or Mennonite man drive the truck with the supplies and workers.

Oh yeah, Warren. They make beautiful quilts and expensive too. It's what many Amish women do to earn money for their family, and I've heard they get together in sewing groups to work together on them, too. Or maybe each woman is working on her own and they just get together to talk and gossip.

Ssasscer, I know we went through that area at least once. In Middlefield north of us they have auctions and farmer's markets. There are several Amish restaurants there, too, as well as places to buy gazebos, wooden chairs, bird houses and other things made by hand with very good workmanship. There are numerous factories around there, too, where a lot of the Amish men and older boys work.