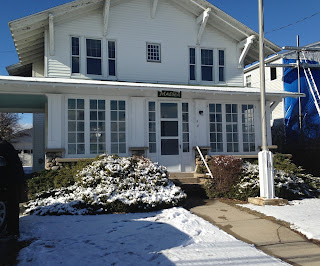 I just said goodbye to a completely unsuitable love, the home I’ve rented for the past year. A house I’ve called, with great affection, Musty Manor.

The real estate listing details the four bedrooms, two baths, light-filled porch, second-story deck, two-car garage. Up close I know that rain has made its way much too often into the attic, the stove doesn’t always work, and the refrigerator was bought during the Kennedy administration. The linoleum is peeling, as is the paint, and yes, it’s probably lead paint. Spiders have the run of the cellar. I don’t bother them unless they bother me, which is why my toothbrush went flying out the bathroom window the morning I reached for it and found a black widow on the bristles. Well, it looked like a black widow to me.

This Grande Dame was built just after the turn of the
century. She overlooks Long Island Sound – Fisher’s Island in the distance, Noank just a short paddle away. It’s thirty steps to the water. Facing east ensures a gentle, early wake up call. Moonlight cuts a path across the water right to her front door.

Musty Manor’s bones are good but she’s a faded beauty. The paint on her broad Craftsman style roof is peeling. Birds nest under the carport roof. The view out the broad windows is watercolor wavy because of the antique glass. But birdsong from those nests flows in the cracks in the window frame, and I can watch the Wednesday afternoon sailing series from the porch.

Those quirky details just make me love her more.

I’ve lived in many houses and ridden out many storms, but never has a house felt as solid as the Manor. She endured the Hurricane of 38. Gloria. Sandy. This winter, when nor’easters blasted ocean waves across the road she simply looked up from her bridge hand with a bored look. I could imagine her thinking, “What impertinence!”

Her daffodils faded just as the lily of the valley bloomed, just before the lilacs and the blue iris and azaleas. The white lilacs were the envy of the neighborhood. I know this because these blooms were beautiful enough to entice a thief to make off with an armload.

Money Pit. Tear Down. I know what people say about her. But she’s a dear old thing. They don’t make them like her any more.

My nieces asked if she’s haunted. She is, and I would know, but only by contented memories.

Have you ever fallen in love with a house?
Posted by Shari Randall at 12:00 AM

Oh, Shari, what a gorgeous house. And right on the beach. She's got stories to tell. I hope someone buys her and restores her to her former glory--even if it means a basic gut job. I'm sorry you had to leave. I hope you are settled elsewhere by now in equally great (and much less musty) circumstances.

Actually, every house I’ve owned, I have fallen in love with. Such is the nature of my disease. I have been the first owner of some homes; my oldest was built in 1795. Each has their own charms, and I remember them all, as you will remember this wonderful old gal.

She's the perfect ramshackle summer house, haunted or not.

As a girl, I was involved in all aspects of renovating an old house. I lived in a book-filled lair in the attic. I still miss it, so made it one of the houses in my books.

Behind my grandparents' house was an even older house that was decaying. I was warned to stay away from it, which may it more interesting. I don't know when it was built, but it was constructed with wooden pegs instead of nails. It was fascinating.

I can't say that I have ever fallen in love with a house. When contemplating houses, I've chosen the best of all factors and then change/add what I want to get it to its premium. I have missed houses, though, even if I wasn't in love with them due to the memories that were created in the house. I've been thankful for houses where I have experienced love and security.

Thanks for posting pictures. Love the windows! You will find another house and fall in love again. Don'tcha hate when people say that when your heart is breaking? I'm not trying to be insensitive, just practical or maybe pragmatic.

Oh, Shari, I feel for you. It is so hard leaving a house you love. I hope you have found a house that is as comfortable and will bring you happy memories. I believe the house is going to miss you too.

Hi Kait, I think the old gal will live on in a story or two. I forgot to mention, she has a name - Maesea, after the former owner Mae.

Hi Jim, Nice to know I am not alone with this malady!

Hi Margaret, You're right, the perfect beach house is always a little ramshackle. Your book-filled lair sounds so intriguing (and like the perfect spot for all of us book mad writers).

Warren, there is nothing that makes kids want to do something more than being told not to do it! The house behind yours must have been pretty old. Pegs instead of nails! Can you imagine building that house?

Hi Elaine, I don't think you are insensitive at all. Practical is the way to go with real estate. Unfortunately/fortunately we're looking at another house - totally different than this one but I think pretty impractical. I am trying to resist!

Thank you, Grace! I think the house liked us. Funny thought, but true.

Shari, I fell in love with the old farm house I bought that no one had anything good to say about. It had a leaky roof, two basement walls collapsing with wild critters living in it and a back porch with pink insulation between cheap storm windows. Inside it had not been painted in maybe twenty to thirty years. An old man had lived there alone for years. My son gutted it and put in new wiring replacing what had first been installed in 1917. He also put in new walls and did so much more to turn it into a comfortable home for me. Eventually, he added two more rooms upstairs. I loved my old windows with the wavy glass, but eventually replaced all except the two large front windows with energy efficient windows. My house is nowhere near as charming as yours with a view like yours, but I still my old house with a library now, hard wood floors that were original to the house, a sort of sun room, and well, let's say I won't mention the basement. If we had a contest on whose basement was the worse, I'll be I'd win. I have no indention of every leaving my small farm and this house. I'll have to be carried out on a stretcher or in a coffin to leave my home.

I remember my great grandmother's house. When she was 17, she married a man who was 72. He had the house built for her. To my eyes as a child, it was huge. I think it had six bedrooms, two staircases, a parlor and a sitting room, a big dining room with a butler's pantry. I think the house is still standing.

Hi Gloria, Sounds like your home is perfect! And how sweet that your son brought it to life for you - no wonder you love it so.

Hi Kathleen, Your great grandma's house sounds amazing. A butler's pantry! i bet you had a grand time exploring it.
I have to say - she was 17 and he was 72! There's a story there.