An Interview with Marla Cooper by E. B. Davis

I knew Marla Cooper as a SinC Guppy and requested an advance copy of her first book when I heard she’d received a publishing contract. Terror in Taffeta is a delightful, comic, feel-good read. It’s a “curl up on the sofa” book you can sink into and lose yourself. How does it entertain? With a foreign setting, a perfect wedding (until the murder), culinary Mexican delights, drinks with sunset vistas, and a mother from hell—need I say more?

“Mrs. Abernathy was keeping herself busy, probably scolding someone
or fashioning a new coat from Dalmatian puppies.”
Marla Cooper, Terror in Taffeta (pg. 233) 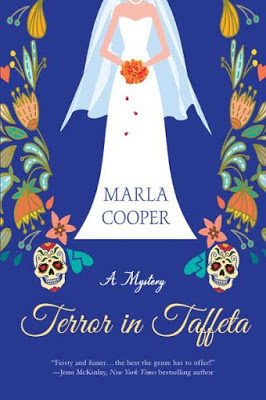 Kelsey McKenna has planned out every last detail of her client's destination wedding in San Miguel de Allende. But what she didn't plan on was one of the bridesmaids dropping dead in the middle of the ceremony.

When the bride's sister is arrested for murder, the mother of the bride demands that Kelsey fix the matter at once. Although Kelsey is pretty sure investigating a murder isn't in her contract, crossing the well-connected Mrs. Abernathy could be a career-killer. Before Kelsey can leave Mexico and get back to planning weddings, she'll have to deal with stubborn detectives, another dead body, late-night death threats—and guests who didn't even RSVP.
http://marlacooper.wix.com/marla-cooper

Where is San Miguel de Allende in Mexico? Have you spent time there? Your honeymoon, perhaps?

San Miguel is a wonderful little colonial town in central Mexico that's been an artists' colony since the 1950s. My dad went to art school in San Miguel at Escuela de Bellas Artes, and he took my mom back there years later for their honeymoon. I've visited twice now, and there's something so romantic and almost magical about it. It's always had special significance to me, so it seemed like the perfect fit for my first book.

A destination wedding planner specializes in weddings in whatever fabulous destination the bride can dream up: a beach in the Maldives, a castle in Ireland, a dude ranch in Wyoming. This makes some people feel grumbly about the cash outlay—usually people who feel like they have to attend—but most people are excited about the group adventure.

What is a tequila donkey? Is it a Mexican tradition or a joke?

Kelsey tries to please everyone, and it’s a characteristic that makes us like her. But there is a downside to being a people-pleaser, isn’t there?

Definitely! When you're working with brides-to-be, it has to be all about them. After all, they're the ones getting married. But in book one, Kelsey has to learn that sometimes standing up for yourself is more effective than being polite.

Only a death threat causes Kelsey to think of herself first. Will Kelsey tighten her wedding-planner customer contracts after this case?

Ha! It probably would be a good idea for her to be more specific about what her contract does and does not include. (The "dreadful, unforeseen circumstances" clause.)

I was a bit frustrated by the Spanish names of food, which led to some snacking while reading. Tell us about the following dishes:

Tacos carnitas - Pork tacos. They don't have to be sold by a street vendor, but our favorites were!

Huevos rancheros - "Ranch eggs." A hearty breakfast of fried eggs served on top of tortillas, usually with beans, cheese, and salsa. Mmmmmmm… excuse me, I have to go get a snack before I finish answering these questions.

Albondigas - Meatballs. When my best friend read the book, she texted me: "Are meatballs a big deal in San Miguel, or did you just want a chance to use the word 'albondigas'?" Okay, she knows me too well. I don't know why, but I've always loved that word!

My favorite character, mother of the bride, Mrs. Abernathy, is such a b*tch. Did you have a real-life model for her (you don’t have to name names)?

I'm so glad you like her! As you can probably tell, she was really fun to write. It was the first time I'd ever experienced a character just marching onto the page and saying whatever she felt like. I would literally write a line of dialogue and then think, "Oh my God, I can't believe she just said that!" She wasn't really based on anyone, but in my head she sounds like Susan Sullivan, who played Castle's mom (but much sassier).

Brody, Kelsey’s friend and wedding photographer, isn’t just a sidekick; he breaks into computer files, which in turn put Kelsey’s investigation on the right path. Where did Brody get his computer skills?

He acquired them suddenly, by necessity. Actually, he got them from my husband, who regularly says things like, "I fixed your computer. I just had to boot into single-user mode, repair Linux file systems and then reboot." (Ohhhhh, why didn't I think to do that?!)

Will Brody ever get to finish a plate of food or a drink with Kelsey around?

Kelsey and Evan, the private pilot, enjoy a casual relationship. But it goes from okay to bad. What’s the problem, and should Kelsey make it purely a business relationship?

Oh, Evan. Their backstory is that they had dated before when he lived in San Francisco, but he didn't want to be tied down—and he could never completely believe that Kelsey wasn't secretly longing to plan her own wedding. So things are going a little too well, and he freaks out a little.

Was “Veruca” a character in “Charlie and the Chocolate Factory?”

Yes! Veruca Salt was the horribly spoiled character known for saying "I want it NOW!" So "Veruca" has become Kelsey and Laurel's code word for demanding brides.

Is Terror in Taffeta the start of a new series? If so, what’s next for Kelsey?

It is! I'm working on Book Two right now. It's set in the California wine country, which means I "have to" drink wine for research. (It's okay; I do it because I care.) I wish I could tell you the name of the second book, but we're trying to decide that right now. 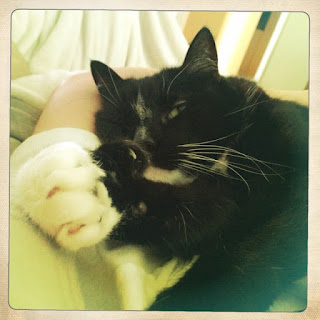 Aside from your husband, you live with a polydactyl tuxedo cat. What’s that? Do you have any pictures?

Sounds super fancy, doesn't it? He's black with a white chest (thus the "tuxedo") which means he's always ready for any formal occasion. And "polydactyl" means he has an extra digit. Some people say they're "six toed" but I prefer to think of him as having thumbs, which means I might be able to teach him to make coffee one day. I have approximately three million pictures of him, but I think this one shows off his special features the best.

For vacation, do you prefer beach or mountains?

I'm going to say beach, as long as there's snorkeling. I burn easily and get really impatient lying in the sun, but I can snorkel for hours! (Properly sun-blocked, of course. The first time I did it, nobody warned me about the backs of my legs. Ouch!) 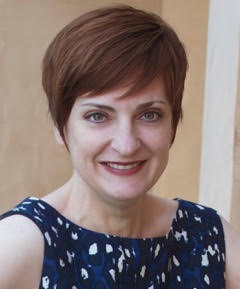 Welcome to WWK, Marla. It sounds like you have a great beach read in store for folks.

a fun read! Destination weddings sound so adventurous and exciting, until...

Great book cover. Thanks for sharing.

Hi Marla! Such a fun beach book! So excited about book two being set in wine country. Do you have a pub date?

Confession time - I was addicted to Bridezilla for a while. In awe of the drama, really. This book is right up my alley - with murder -- doesn't get any better than that! Welcome to WWK, Marla.

I have to admit I have trouble getting my mind around the thinking behind destination (or otherwise extravagant) weddings.

It's just a moment in time. It's the marriage, not the wedding, that I'd like to see emphasized. And wouldn't the money be much better spent on something like the down payment on a house (or, in a few cases I've heard about, paying off student loans?)

Obviously tons of people don't agree with me. And the series sounds like a fun one.

Hi, everyone, and thanks for having me on your blog today! These were such fun questions.
- Jim, Margaret and Warren, thanks for saying hi and for your nice comments!
- Shari, the second book is scheduled for March 23. (Yippee!)
- Kait, the drama aspect is definitely what drew me to this idea. Weddings are full of them!
- KM, on the plus side, destination weddings can serve as the coming together of two families for more than just a couple of hours—but I agree about the extravagance angle!

Welcome to WWK, Maria. Your book sounds like a good read.

Loved your book! Can't wait for the next in the series. Thanks for the interview. I hope you come back and visit again.

What fun questions and answers! And it's so sweet that the setting is where your parents spent their honeymoon.
Note: Marla, you should probably change your password now that everyone knows it's Albondiga.
And if you ever succeed in teaching your cat to make coffee, you can open a coffee cat bar in San Francisco and make a fortune!

Thanks, ladies! And Vickie, okay, I just went and changed it to "tequila donkey." Don't tell anyone, okay? :-)

I loved the book, too. I picked it up at Malice and I'm so glad I did! OK, 2 things. Albondigas is MY favorite Spanish word, too. AND my grandchild, Kelsey, played Veruca in her high school production. She did a wonderful job, too. She stomped to the front of the stage, folded her arms, and ad-libbed "I hate you," to one of her parents. Brought down the house. This is a strange coincidence!

Kaye... get out!!! That is so many coincidences I don't even know what to do with it! Next you're going to tell me you have a cat named Brody who you picked up in San Miguel de Allende. So glad to hear that someone else has an appreciation for the word "albondigas." It's a very satisfying word, isn't it? Thanks for sharing!!

I don't have him yet, but I'm planning on picking him up next time I'm there. :)

Marla, so glad to see you here. Loved the interview we did at Malice. Good luck with the book!