A Good Person to Murder 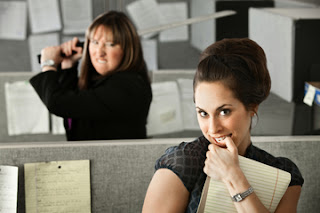 One of the secret benefits of writing crime novels and short fiction is the chance to vicariously kill off people who have worked hard at pissing you off. We’re seldom violent people, we mystery writers, even though we write about murder and lesser crimes. We’re usually polite and kind to our friends and family and gentle with kids and animals. If you know a lot of crime writers, you know we’re mostly very nice people. I believe mystery and thriller writers are the nicest group of writers there are, and I know a lot of various kinds of writers.

My theory about all that niceness is twofold: Nice people may just be drawn to write mysteries and thrillers, or we’re all so nice because we have the chance to work off all our anger in our books. I know I’ve been able to deal with a certain person’s nasty behavior in real life much more easily since I wrote a scene where a similar character was mowed down by reams of bullets in a classic gangland shooting.

For that matter, listening to mystery writers at a professional conference talk at meals or in the bar can be scary for outsiders. We swap good ways to murder, especially in ways that are difficult to prove, and methods and places to dispose of bodies. I’ve watched waitresses and bartenders stand back from a group of us with leery eyes as they overhear bits and pieces of what must seem a violent conspiracy. I suspect the really troubling thing is that all this morbid conversation is always full of great cheer and hilarity.

This ability to extract satisfying revenge on the page can remove lots of resentment and hurt from our lives. That co-worker who goes around behind everyone’s back, telling lies to stir up trouble in the workplace that costs people their promotions or even their jobs—smash her over the head with a fax machine. The senior faculty member who steals your research and passes it off as his own, branding you as a pathetic liar when you protest—how about rat poison in his coffee? The old schoolmate who made you a laughingstock at the last reunion—have her hit and run over by a car. The guy who humiliated and dumped you publicly after “borrowing” all your savings—let a crazed serial killer catch up with him and slash him up. The ex-wife who cheated on you all through your marriage and then took your house and kids to go off with someone else—fake a suicide with a handgun to the head (that your smart detective will see through immediately). The sexually harassing boss who threatens to destroy your career if you complain or don’t let him have his slimy way with you—tie him up naked for kinky sex and smother him with a pillow over his face.

So the next time you’re at a crime writers conference, look around at all those sweet, funny, and kindly mystery authors and ask yourself, “Why are these people smiling?”
Posted by Linda Rodriguez at 12:30 AM

Email ThisBlogThis!Share to TwitterShare to FacebookShare to Pinterest
Labels: mystery writers and victims

Perfect! And so true. When I was at the Writer's Police Academy a few years ago the rooms were abuzz with murder and mayhem. And no one was shy about sharing or about teaching us new ways that we could then endlessly dissect over a few drinks. In our case, the wait staff seemed to enjoy it, and contribute!

I think you're on to something--take out all our frustrations in our writing. Kill off those who have done us wrong. And be cheerful about it.

I have noticed, though, that when I'm with people I know who are, in fact, convicted murderers, they may have a very dark sense of humor, but they don't find murder itself or its aftermath amusing.

I'm always on the look out for memorable characters or dogs. That pair of nasty terriers up the street? I've got plans for you.

Now that it's gardening season, I'm thinking about poisonous plants and delivery methods.

So what you're saying is that writing mysteries is less expensive than hours on a psychiatrist's couch.

Love this, Linda. After my ex had his mid-life crises and left me after more than thirty years of marriage, I wrote the short story "Cheating On Your Wife Can Get You killed." Another person I killed off, was the doctor who took over from my son's oncology doctor when his own very good doctor went out of town for a week. That doctor would visit his teenage cancer patients in a room that held four teenage boys with cancer, and stand at the door with his arms folded across his chest and talk to them from the doorway. I felt sorry for the boys who were his patients.

That being said, there are very few people who irritate me enough to want to kill them even on the written page so almost all my victims are not based on any particular person, not even my ex who I forgave within a year after he left, and having just come back from Malice, I can attest to what a happy bunch of people mystery writers and fans are. Everywhere you heard laughter and saw smiling faces, and participants who struck up conversations even with people they didn't know.

The first novel I wrote had a character that some people might think resembled my first wife. However, since any resemblance between characters and any person ..strictly coincidence, that could not possibly be trued. Could it?

Kait, I was thinking about discussions I've taken part in at Malice Domestic and Bouchercon where we were having a great time, but the wait staff was notably nervous. Especially a couple of times sitting around with my friend Luci Zahray (AKA The Poison Lady) while she gave us great toxicological info on ways to kill someone without anyone ever knowing they'd been murdered.

KM, I think the reason we can be cheerful about it is because we know none of us would ever hurt anyone. It's different for your friends who have and have spent time with folks who still do.

Margaret, do be careful. Readers love to read about ingenious ways to kill dreadful people, but they get very upset at authors who harm animals or children in their books.

Gloria, I was thinking of Malice and the many great discussions in the bar and restaurant I've had with friends there when I wrote this.

I'm with you, Warren. That nasty person I find easier to deal with since the fictional gangland shooting? Nobody I ever knew in real life. It's fiction, right?

It might be true that I wrote out my frustrations when being tormented by an assistant principal, and convinced my colleagues that it was preferable to messy reality, even though they offered to help hide the body. I did not, however, rejoice at her actual death, in which I was not in any way associated, though there was a creepy similarity in one detail. Real life death is sad because of the "she was nice to her mother" factor. (My NCLB Murder is in my Facebook Notes).
I'm thinking you need a "Mystery Writers at Work" sign for restaurant tables, though it's fun to shake up those around you. A friend used to stage provocative conversations on public transport, to give commuters something to talk about, and we feminists once terrorized a predatory charter bus driver with a fake discussion of what to do with him -- the rest of the trip he didn't come near any of us.

Thanks for this interesting post, Linda. A few years ago I had the pleasure of hearing you speak at a conference in Columbia, MO. Now I know why you smiled during your talk. ;)

OK, gotta share this. When we got back from WPA my husband wanted to know when I had to go on another conference. He's a pilot so he usually flies me and then I let him stay :).

It shocked me that he WANTED to go. He's usually very blase. He said, "it's the only place I've ever been where people sought me out to explain how to kill with your bare hands!" So I asked him how that came up. He said he was at the bar and the two women next to him were talking -- he had to interrupt to tell them that if they did what they were talking about, they'd both be dead. Apparently vicarious murder and mayhem has broad appeal.

Mary, you're right. We should make Mystery Writers at Work signs to use at conferences and when we get together in critique groups--and when staring out the window and ... ;-)

Donna, so nice to see you on here. As I recall, I was talking about the way publishing is changing at that conference. Definitely good hunting grounds for possible victims, I should think--not that I'd know or anything.

Kait, my husband loves to go with me to mystery conferences. He'll be with me in NOLA at Bouchercon and the SinC into Great Writing conference before it. He loves mystery writers. Just thinks they're the nicest people in the world.