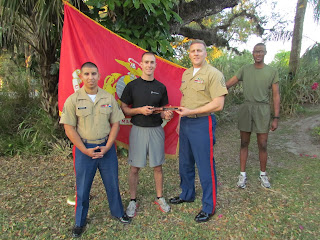 My first thought this month was to blog on my experiences with Windows 10 (basically good experiences despite what I’ve heard about the program). Then I realized this blog would appear on Memorial Day weekend. That brought patriotism to mind.
Memorial Day was a big deal when I was growing up. I was in the band in my grade school, first honor guard (I carried the gun alongside the flag) and later as drum majorette. To this day I don’t know how that happened. I still can’t tell right from left and in giving directions, I’m apt to say, “Turn that way.” And if that doesn’t work, “Make a driver.” It’s sad, but those who know me well will turn left simply because I told them to turn right. I blame the nuns. I think they made me a righty when I was a natural lefty. Left, as you may know, is sinister in Latin. Now that would stop any self-respecting veil wearing, habit enrobed person in their tracks!
Still, despite my handicap, I was proud to march in my small town parade every Memorial Day. The town was a mile deep and a half mile wide. We marched from our school through the center of town to Memorial Park. Older students made floats on flatbeds dragged behind tractors or pickups. Real floats. I can remember a papier mache ship depicting the sacrifice of the Sullivan brothers in WWII. And there was the year the high school decided to depict the surrender at Appomattox complete with a life-sized papier mache Traveler. My brother’s role was to hold the horse’s head. Of course the horse wasn’t going anyplace. Or maybe it was, hard to say how stable it might have been.  The Memorial Day parade was the last of the year for the band, unless we got invited to perform at a 4th of July parade, which sometimes happened. 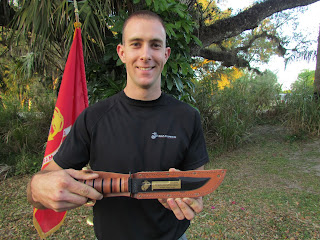 The most memorable part of the celebration for me was the veterans’ parade. As a young child we had vets from WWI right on up to the then current Viet Nam War. In my heart I knew it was more important to salute them than to scarf the free hotdogs. And I knew that by saluting them, we were really honoring all of those warriors who had not come back to march in their hometown parades. Nothing brought this home to me more than the year I was selected to place the wreath on our veteran’s memorial.

An old man stepped out of the crowd to assist me. He tottered on a cane and he wore the uniform of a United States Marine. The entire event was unscripted. He stepped up, saluted the flag, then he took my arm and led me to the memorial. Together we placed the wreath at the base of the marble column. I thought he stumbled when he half knelt at the foot of the monument and let his fingers rest on a name. Before I could react with all of my Girl Scout first aid, he stood, turned, snapped to attention and saluted me. Tears were pouring down his face. 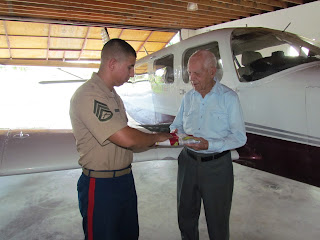 The man was Mr. Treple. He had served proudly in WWI as a Marine—the uniform still fit him—sort of. He’d lost his only son, also a Marine, to WWII. His boy child buried in an unmarked grave somewhere in Europe then still listed as missing in action and presumed dead. We all knew Mr. Treple, and we knew his wife had died that spring, just before Easter. Mr. Treple followed her before the fall.
Freedom isn’t free. Semper fi.
That’s my Memorial Day memory. What’s yours?
Posted by E. B. Davis at 12:00 AM

In Alpharetta, Georgia, instead of a Memorial Day parade, we enjoyed Old Soldiers Day the first weekend in August, originally a remembrance of the veterans who fought in the war between the states but now a remembrance of all military veterans.

What a lovely tradition, Margaret. You stirred a vague memory for me of visiting my cousins in Florida one summer and attending a Confederate Memorial Day picnic. I have no idea when it was, but I do remember the picnic and there were ladies in hoop skirts. I was very young, probably not more than five.


Kait, I was never in a high school band or marched in a parade, however I always place flowers on the graves of my loved ones for Memorial Day, and almost always my family gets together for a picnic, although the family is just my local siblings and me now. My grown kids have other things they do. There are no parades close to where I live.

I don't think that there are parades in many towns these days. That seems to be a thing of the past, unfortunately! I love that you place flowers on the graves of loved ones during the Memorial holiday. It's traditions that are important and tie us to our past. Have a wonderful picnic and Memorial Day!

Are all my friends on this list in the Carolinas OK? Stay safe and dry.

I know I'm late, but wanted to say thank you for sharing such a beautiful memory. The true meaning of Memorial Day seems to be fading. It's just another long weekend for so many.

Hi Shari, never late. Yes, it does seem that the old holidays we cherished are fading. Maybe it's because the world is moving so quickly these days that there is little separation between holidays. We always had huge neighborhood celebrations on the 4th of July, complete with fireworks that everyone looked forward to, and Labor Day was the last big beach weekend -- our schools began on the Tuesday after Labor Day where I grew up so it was also the last day of "freedom."

The most touching Memorial Days I remember were when my kids were young and all the school children marched in the parade and placed flowers at the graves of soldiers who had died in the Civil War (this was in Gettysburg.)

Every year, components of the Rolling Thunder motorcycle group travels through the area. One year, a neighbor (a few miles away) left his home early in the morning to meet a group--and was hit by a drunk driver before he even got past his barn. The site is decorated each year with flags and memorials.

I was in Washington, DC, this morning (Memorial Day) dropping off a daughter who has a summer internship, and had trouble negotiating my way out of the city, between closed streets and traffic being stopped for floats travelling to the staging area. Because parking is so difficult down there, I was not tempted to stay for the parade, buy my daughter unpacked her things and headed over.