Dangerous Times in a Book’s Creation

Many dangers that threaten to turn a book’s creation into something less than it could be exist between the spark of an idea and the publication of a work. I am right now in a critical area with my next Seamus McCree novel, Doubtful Relations.

Its inception might be prevented because the author was not mindful and missed the spark, dooming the story to an eternity of nonbeing.

Some authors have the reverse problem to that of missing new ideas; they are overwhelmed by new ideas. Rather than choosing one and working to bring it to a satisfactory conclusion, they flit from one shiny concept to another and never complete a first draft. They begin each story with enthusiasm, but at some point a brighter object appears to distract them. The idea they were working on appears pale in comparison, and that once great idea is consigned to the physical or electronic bottom drawer with its fellow incomplete projects.

I do not want to suggest that authors should not abandon stories that do not pan out. I’ve quit mid-draft when I decided the story was not big enough for the canvass I chose. I also have a story that after struggling with it, I concluded I could not yet capably tell with my skills. I like to think I have not abandoned the story, merely put it on hold.

Completing a first draft is both a cause for celebration and time of danger. First drafts by their nature often suck: The storyline is not yet solid; the writing is clunky; characters and descriptions are overwrought or barely sketched. There are so many problems, some authors give up. That has never been my issue.

Conversely, some newer authors think their first draft is a fine creation and rush it on its path to publication. Agents and publishers will reject manuscripts that still need much work. I fell into this trap with drafts of my early novels that I tried to find homes for before they were strong enough to deserve them. I continued to improve Bad Policy until it was deservedly published.

Some self-publishers are so excited when they type “The End,” they doom their book with premature publication.

Fortunately, I enjoy revision. I am neither discouraged at how bad my first draft is nor enamored with my terrific story. I know I have many drafts to go before I have a version I think worthy of publication.

However, there comes a point while working on each of my books where I become sick of it. I want to howl to the moon that I am through; I want to move on to the next project. Doubtful Relations is at that point.

I’ve improved the story through a number of drafts. Beta readers provided large scale feedback that I incorporated. I modified the story based on my story editor’s suggestions and comments. I’ve pruned and fluffed and rewritten and repeated. Now Jan is reading it one last time before I ship it to my editor for her review.

And, of course, Jan will find errors (because there are always errors). And she will find several (hopefully not more) things that have been wrong in the last several drafts that everyone who read those versions (including both me and Jan) has missed. Because I am ready to be DONE WITH IT, my patience is frayed by her finding stuff that should have been caught before!!

I’m not frustrated with her; I’m frustrated that I hadn’t found and fixed those things. That is what makes this the most dangerous time for me. I might rationalize away a problem or slap a Band-Aid on it or make quick changes that correct one problem and create another. Any action like that will diminish the story. 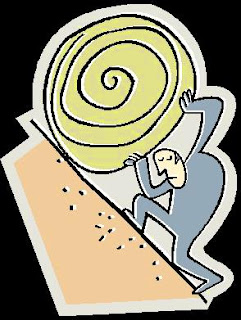 Knowing my style, I am mindful of my reaction and counteract it by reminding myself I desire to produce the best book I possibly can. To force myself to slow down, I have given myself until the end of May to deliver the manuscript to the editor. I’ll have at least seven weeks between receiving her final comments and the book’s August 23 publication date to reflect final changes.

How about you, authors? What is the most dangerous time for your novels?

Readers, have you ever been enjoying a well-written book, and then, as though someone else took over authorship, you are smacked with a clunky section somewhere in the middle or an ending “phoned in” from the beach (or mountains if that’s how the author would answer Elaine’s question about favorite vacation place)?

I have so many things I want to work on, sometimes it becomes a problem. And I find I'm so impatient to be done with a manuscript, I have to sit back and review it carefully before I decide it's good enough to be a final version.

I do sent nearly-final drafts to trusted readers, which somewhat helps with the urge to submit a not-quite-ready version.

Perhaps the most frustrating is when I wake up in the middle of the night and think to myself, "You idiot, you should have included this in that last one..." Usually this occurs after publication, much to my frustration.

Right now I'm working on a historic short story for the call from Malice Domestic (and discovering why writing historic fiction is a whole new ballgame. The research!) Then I have two other short stories I'd like to finish up and submit to anthologies. And a young adult ghost story. Wildside Press just released "Abductions and Lies," the 6th in my Jesse Damon Crime Novel series, and I was intending to put that on the back burner for a while, but the enthusiastic response of my (relatively small) fan base has me thinking again.

We each have our own way of dealing with the conflicting "I want to be done as soon as possible" and the "I want it to be the best it can be" goals.

I'm still wallowing in the morass of endless revisions, though my critiques are getting more positive. I always have a short story cooking on the back burner. When I'm ready to shred my WIP, I put a rubber band around it and toss in a drawer for a few weeks.

I've just finished reformatting my first draft into book form after having three critiques of the book. Now I'll be going through the reformatted book looking for things I may want to change or little glitches that have been missed. I have a feeling I have left out some descriptions or something for any new reader who picks up the book without reading the previous books. It's so easy to do that when I and my critique partners have become so familiar with my returning characters. Fortunately, like you, I enjoy revising. It's kind of nice to read a book I've been working on for months from the beginning.

Still, I have to admit I'm eager to start the new book, too, and already have it partially plotted. It's probably better that I'm not starting it now because this is my gardening and yard work season so I have less time to work on it.

About a week ago I finished reading a murder mystery that seemed to end prematurely. It felt like there should have been about three more chapters. The identity of the murderer made no sense, and it also seemed to me that that person had no real motive to commit the murder. Did the author pull a character's name out of a hat and decide "THIS is the murderer!"?

I must say, though, that that's the only time I can ever recall reading something that seemed unfinished.

Deb -- You do a much better job of picking books than I do, although you described a very unsatisfying ending. When it comes to endings, I find more books where they peter out, taking way too long, or where they are abrupt (although not as abrupt as you described)-- sort of like the author saying, it's Mr. Zed, I'm done.

I think we all experience a dangerous time in each book where we long to be done with it--even if it truly isn't ready. I agree with your assessment. Drafts are just that--a blueprint for revision. But, like you, I have been at a point where it is difficult to recognize what else needs to be done. It is that moment when you think you have caught and addressed everything when someone points out the obvious error--that is my most dangerous time as well. That's when I go for a dive or a run and let the comment resonate. Only then, after the initial aaarrrgggh!, can I step back in and address it.