What Reality TV Taught Me about Accessibility by Micki Browning

Building a website before having a book to launch struck me as slightly daft. Why spend time and effort on something no one would likely see? Turns out, you never know who’s poking around in the ether.

It began with an email sent through the contact page on my website. “Contacting you regarding a new series we’re developing for prime time about a former female detective…This would be to submit you for consideration by our producers to be the star of our show.”

Initially, I thought it was a scam. But a couple keystrokes later and I confirmed that both the company and the casting manager were legit.

A confession: I rarely watch television. Unless it has direwolves, Helen Mirren, or a big bang in the program, I’d rather spend my time reading. After a couple of laughs with my husband, I forwarded the email to my agent and titled it “Stranger than fiction.” Turns out, my agent has family who works in reality television, and she encouraged me to follow up on the opportunity. 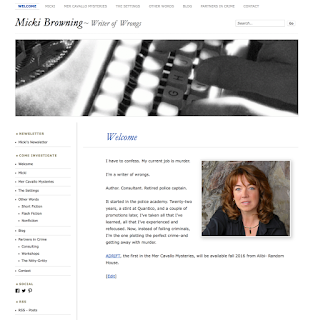 I called the casting manager. He’d discovered my website and had read my bio. Based on my years of experience in law enforcement, the rank I attained, the bureaus I had supervised and my training in media, he felt I was a perfect match for the show. He especially liked that I was an author, and understood the dynamics of storytelling.

He convinced me to participate in a Skype interview where he would record the interview and then forward the “casting tape” to the producers.

The instructions he sent me to help prepare for the interview would be helpful for any author involved in a video conference call (think book club interactions or remote training).

·      Stand four to five feet from the computer during the interaction—it looks better and
would help keep my energy level high.
·      Light should be positioned in front of me to avoid shadowing my face.
·      Make sure to have a glass of water at hand.
·      Silence my cellphone.
·      Consider the background. Blank walls and windows should be avoided, while
bookcases, art, or plants look best.
·      Be “camera-ready” a polite way to remind me that this was for television and I should
make sure to pay attention to my hair and makeup.
·      Wear “detective-looking” clothes, which I interpreted as a blouse and jacket. (Since
only my upper body was framed in the shot, I wore jeans and my favorite boots for a
little extra boost of confidence.)

Being at home during the interview quelled my nerves. He further put me at ease by explaining that he would ask me a question and then mute his microphone and record my answer. If I flubbed, I could rerecord anything. He was more interested in having my personality shine through than in having a flawless presentation.

He started by walking me through my resume. In many ways, this was no different than establishing my credentials during a court case. Then it got into the specifics of the show—again setting up the questions and allowing me to answer.

In many ways, the process is like querying an agent. You want to present yourself in the best light, but ultimately, it comes down to many things that are simply beyond your control. Whether or not I am selected is beside the point. My brush with reality television was only possible because I was visible.

My first book launches on September 20, 2016. I created my website in 2014. Since that time, it has been the conduit between me and people who have wanted to hire me as a consultant, potential readers, other authors, and agents assessing my platform and professionalism. It also  helps establish my credibility during research when I reach out to someone with a question. Like me, many people will do a bit of their own research before responding to inquiries.

It takes time and effort to create a website that best reflects who you are as an author. Is it worth it? Absolutely. You never know what opportunities await—as long as people have a way to connect. 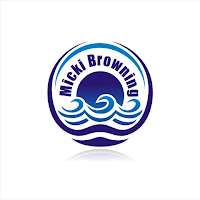 An FBI National Academy graduate, MICKI BROWNING worked in municipal law enforcement for over two decades and retired as a division commander. Her mystery, Adrift, set in the Florida Keys, won the 2015 Daphne du Maurier Award for Excellence and the Royal Palm Literary Award for best unpublished mystery and unpublished book of the year. It is slated for publication in fall 2016 by Alibi- Random House.

Micki resides in Southern Florida with her partner in crime and a vast array of scuba equipment.  Learn more at www.MickiBrowning.com
Posted by E. B. Davis at 12:00 AM

What a wonderful story!

It falls in the "Luck is when opportunity meet preparation" category.

I hope they do pick up your reality show. I will watch for it.

Congratulations on the new book.

Thanks KM! I'm still shaking my head over this one!

Welcome to WWK, Micki & congratulations on your novel debut. You have shown that once again Good Luck = Preparation + Opportunity.

I also welcome you to WWK. What an interesting story. Like you I watch little TV preferring to read. The shows I do watch are almost always mysteries on PBS once or twice a week. Congratulations on your new book. I look forward to reading it.

It is a pleasure to be here, Jim. Thank you. I think preparedness is a holdover from my prior profession. I always played the "what-if" game--which come to think of it, certainly helps in this profession as well!

Gloria--oh, I do love PBS. Thank you for the well wishes. This is a very exciting time for me.

I agree with KM Rockwood. You got noticed because you've got an online presence and you also have credibility not just as a former cop but also as an accredited (and award-winning!) author. May you sell all that you write. Good luck.

Yay, Micki. And ditto what Jim Jackson said. That's exactly what luck is. Keeping my fingers crossed that something really good and fine comes out of that interview. Marilyn (aka cj petterson)

Alan--thank you! Embracing social media and creating an online presence was difficult for me. Not technically, but from a personal comfort level. I avoided all of it when I was a sworn officer. I was also blissfully ignorant of what a time suck it is. Well, that's changed. --oh look! A new post! ; )

Hi Marilyn! While I was working, I never realized how valuable my training and experience would be in my life after law enforcement. There's the obvious payoff, but for example, not every officer gets media training. As the Public Information Officer for my agency, I had extensive exposure to it. I can't tell you how thankful I am for that. Thanks for your crossed fingers!

Thanks Kait! Exciting times. It's been really interesting to pull back the curtain and see how another creative industry operates.

Micki, what an exciting year this will be for you. Can't wait to read your new novel and - I hope - catch you on TV. Fingers crossed! Wishing you the best, Shari

Shari, I count my blessings every day. The prospect of this opportunity coming to fruition is certainly exciting, but I have to confess, it pales by comparison to having my first book published. It's the difference between suddenly receiving an unexpected treat versus working years toward a goal and having the good fortune to achieve it. I still pinch myself. Thanks for your kind words!

This is so exciting! My fingers are crossed for your show, but also for book sales, of course. Best of luck!!

How exciting, Micki! You would be great at the TV gig, for sure. I'm curious to hear if you'll be adding another career to your repertoire! Wishing you the very best on the upcoming book release -- congratulations!

Kaye--Thank you for all your support. It never rains but it pours, right?

Christine--This isn't quite what I envisioned when I retired from law enforcement. That said, I've never been afraid to take a chance! Thank you!

So freakin' thrilled for you! Having taken online classes with you through the Guppies, I've really enjoyed the little bits of writing you've shared with us. Looking forward to a Big Piece!

First of all, that's awesome, Micki!! Secondly, I totally agree that you never know what opportunity will find you if you put yourself out there. And whether or not this leads to anything, it's really cool just having someone seek you out!

Laura--I continue to learn so much from the Guppies--both on the listserv and in the classes they sponsor. You are proof that Guppies are supportive, generous people. Thank you for your kind words!

Thank you, Marla! I have to confess, when I received the first email, I thought it was spam...(occupational hazard). It took some research before I answered. ; )