How Have I Killed Thee, Let Me Count The Ways By Robin Leemann Donovan 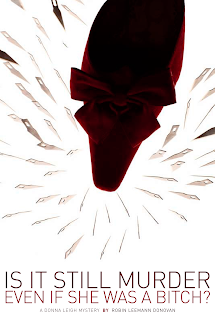 At this point I’ve killed several people. They all deserved it.

Since I’m too big a chicken to ever face prison, it’s all been in print. But the satisfaction was real.

My first murder victim was a woman who tried to take control of my business and have me thrown out. My only trepidation in killing her was the fact that I’d likely end up on the suspect list. And that would be inconvenient.

Aside from killing her, I was able to assassinate her fashion sense. She killed her ethics all by herself.

Killing her was cathartic, as Linda Rodriguez points out in her 5/2 blog post entitled: A Good Person to Murder. But the best part about killing her was that it quickly became a mere detail in a body of work that enabled me to share so many other things.

I want to make people laugh, and I do that by telling the truth. I see a whole lot of ludicrous behavior just waiting to be chronicled. People ask why I don’t write a business book – I believe I have. A creative business is infested with overblown egos – even the good guys can appear comical. It’s all grist for the mill.

My hope is always that I’m giving folks a good read, a solid murder mystery. In and around that, I want to make them laugh. And apparently I have some folk wisdom to impart, but none of that is deliberate – it just happens.

My second victim is a woman who plagued my early work life and preened her puffed up feathers while she did it. My story recounts her Machiavellian manipulation of others—mostly me—to her ultimate self-destruction.

I waited a long time to kill her. It still felt great! And the humor seemed to evolve naturally from the behaviors that I observed on a daily basis. Sure, I added a few comedic “incidents” to keep things moving, but the real humor is in the behaviors, and that’s not something I imagined. It’s something I documented.

For my third attempt I tried to kill a friend. That didn’t work out so well. It wasn’t fun for me and the writing was a mix of stilted and gushy. Apparently, I have to stick to killing people I don’t like.

As I continue to write this third book, I have been forced to twist and turn things so that I can kill the bad guys and save the good guys. That has been a true revelation for me. I always figured I could write what I wanted, but I was wrong. There appears to be some divine force that guides and dictates my work. If I stray from my fundamental tenets I can’t make it work. 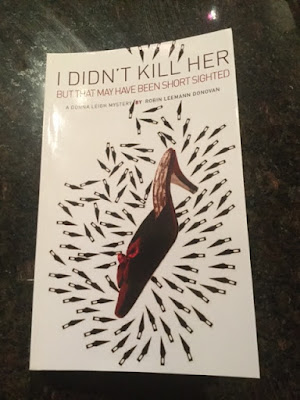 Now don’t get me wrong. Just because there’s divine intervention, does not mean I think my work is divine. It’s just that I’m starting to realize it’s less about me and more about a message in need of delivery for some reason, and I’m just the delivery tool.

I guess that about sums it up.

Robin Leemann Donovan always imagined herself as a humorist, somewhere between Cornelia Otis Skinner and James Thurber, but never had the time to bring this dream to fruition. Her Donna Leigh Mysteries have combined this dream with the ability to kill off those who have annoyed and/or thwarted her through the years, thus providing much needed therapeutic value. She is also president of the advertising agency, Bozell, and has published Menologues, an award winning blog on menopause. She lives with her husband and three bulldogs, Roxi, Sadie and Frank.

My first attempt at a novel, which no one else will ever read, was driven by anger at my ex-spouce. Although the result was an abysmally bad work, I proved to myself that I could write 100,000 words on one idea. And what happened to a character that resembled my ex was deeply satisfying.

Welcome to WWK, Robin. Almost all my victims are not nice people, but none of them are based on real people. The first short story I wrote as an adult was "Cheating On Your Wife Can Get You Killed" after my ex of 31 years left me. The characters were totally different from me and my ex, but it worked to satisfy me and won the Love is Murder contest and appeared in Crime Spree magazine. By the way, it wasn't long before I realized his leaving was the best thing to happen to me because I could live a life alone the way I liked it.

Great idea. Make characters of the people who have wronged you, and then kill off the characters.

Let's see. My ex, of course. And the foreman who gave me such a hard time because he wasn't happy supervising women. And the glass melter operator who was so careless around the melter he almost knocked me into it, but blamed me. And the school principal in Baltimore who told me straight out she was getting rid of all the white teachers. I could keep this going for a while.

I confess to killing off a realtor after having endured 18 months on the market trying to sell the Atlanta house. Otherwise, I'm thinking and writing about victims who intentionally or not, break the law and are charged.